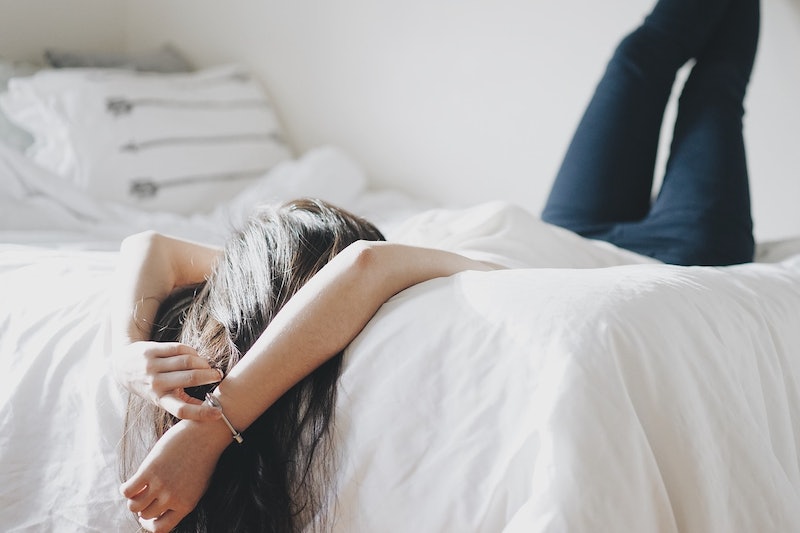 "I have to tell you something, but you can't tell anyone." How many times have you heard this in your life, and how many times have you actually kept the "secret" information to yourself? The surprising way keeping secrets is completely messing with your health has nothing to do with the act of hiding information from others, according to a new report on secrets published in the July issue of the Journal of Personality and Social Psychology.

The real reason keeping a secret is stressful is because knowing that you're hiding something triggers feelings that you are not acting authentically, which in turn can make you feel pretty icky. This might be why secrets are so hard to keep.

Art Markman Ph.D. reported on Psychology Today that another problem keeping secrets poses has to do with goals — in this case the goal being to keep the secret. A goal that can only be achieved by not doing something. "Goals that have not yet been achieved are often easy to think about. That is how your motivational system gives you opportunities to achieve your goals when you see something related to the goal in the environment."

In essence, it's the constant thinking about the secret that causes stress versus the act of concealment. Remember on Friends when Joey was asked to keep Monica and Chandler's relationship a secret? Then, as more people found out, he was asked to keep it a secret that Phoebe and Rachel knew about the coupling too, which resulted in the classic line, "They don't know that we know that they know we know." The constant thinking about the secret eventually led Joey to seek comfort in a bucket of chicken.

Dwelling On Secrets Can Be A Downer

If you've ever tried to intentionally not think about something, then you know that the thing you're actively trying not to think about is often the only thing you can think about. So, while you may have no intention of revealing the secret, the act of constantly thinking about it can really mess with your head.

In the course of 10 studies that reviewed more than 13,000 secrets, researchers Michael Slepian, Jinseok Chun, and Malia Mason tested their theory that thinking about secrets was more harmful to relationship satisfaction, authenticity, wellbeing, and physical health than hiding secrets.

"People found themselves thinking about the secret about three times more often than actively hiding it," Markman reported. "Secrets did decrease people’s overall sense of wellbeing. However, the decrease in happiness was related to the number of times people thought about the secret, and not the number of times they actively had to hide it from someone else. Thinking about secrets was also associated with poorer health."

Most previous research has focused on the act of concealing information as the reason keeping secrets makes you feel bad, but this new research found that the mere intent to keep a secret sets your mind spinning.

“Even in those moments when you don't have to actively conceal a secret, it doesn't go away,” Slepian, an assistant professor at Columbia Business School who researches the psychology of secrecy, told the school's Ideas and Insights news site. “You always have it. It follows you around, and thoughts about it enter your mind quite frequently.”

In addition to affecting your mental health, the constant thinking about secrets can have physical consequences too. Gina Roberts-Grey reported in Forbes that, "every time you think about a deeply held secret, stress hormones such as cortisol can surge, impacting your memory, blood pressure, gastrointestinal tract, and metabolism."

So, it's not all in your head because the negative effects spill over to your body as well.

While the act of concealing information can also be harmful, Slepian said that scenario is less common than you think. “Think about two kinds of secrets. One, you have to hide quite frequently, but you never think about when you’re on your own. The other, you don't hide very often, but you're thinking about it all the time. Intuitively, it makes sense the second would hurt more," he explained to Ideas and Insights. “Hiding secrets feels a little bit worse than thinking about them, but it’s much rarer. So cumulatively, it causes less of a problem.”

What's more, constantly thinking about a secret is a subconscious reminder that you're not being your truest self, and it can make you feel like a fraud. Markman reported that another aspect of the study asked participants to rate their sense of authenticity — how much they felt they were acting in a way that corresponds with who they feel they are.

"Keeping secrets (and particularly thinking about secrets) decreased people’s feelings that they were acting authentically," Markman noted. "That decrease in authenticity led people to feel worse about their life."

So, how can you stop the cycle? Slepain said that sharing the secret with someone you know and trust can take away its power, and that might help you stop thinking about it so much. But, what if the secret is something you really feel you can't tell anyone?

Kenneth Partridge wrote on Ideas and Insights that, in this case, unburdening yourself anonymously can be just as effective as telling a friend. He suggests using the blog PostSecret, the app Whisper, or even just writing it down in a journal.

Because, once you can stop thinking about it you can can regain control of your brain, your body, and your life.

More like this
19 Latinx Therapists & Mental Health Experts To Follow On Instagram
By Kaitlyn Wylde, Naydeline Mejia and Lexi Inks
10 Ways To Be More Empathetic To Your Partner
By Raven Ishak and Lexi Inks
Think Your Partner Is Cheating? These Tarot Cards May Confirm Your Suspicions
By Kristine Fellizar
The 19 Best Tweets & Memes About Bisexual Awareness Week
By Lexi Inks
Get Even More From Bustle — Sign Up For The Newsletter