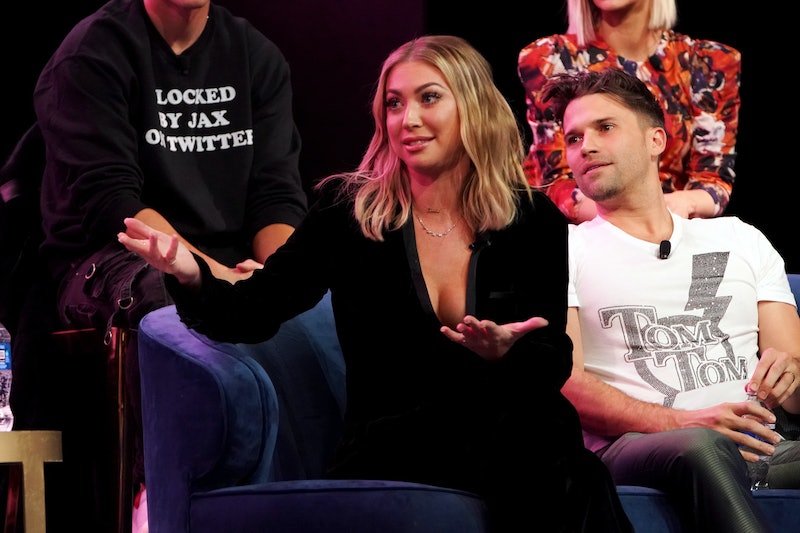 During my first hour at BravoCon, after sitting for a cartoon portrait of myself in Porsha Williams' Season 10 Real Housewives of Atlanta reunion dress and sipping a glass of room temperature Witches of Weho rosé, I found myself giggling at a plastic baggy of pills in a display case. This is a sentence that won't make sense to a lot of people, but it's what the first ever Bravo fan convention was all about. I was by myself in that moment, but didn't feel alone, and it was all because the powers that be over at Bravo decided that people would pay hundreds of dollars — ticket prices started at $299 — to see a replica of the sandwich bag of pills Lisa Rinna keeps in her purse presented like a rare work of art. They were right.

Held in New York City from Nov. 15-17, BravoCon included panels with current and veteran Bravo stars and producers, a mega-sized Watch What Happens Live filming, a Housewives Museum where one could see the aforementioned pill bag and other infamous Housewives props, and a Bravo Bazaar full of all the random products (think Craig Conover's pillows, Cynthia Bailey's accessories) that Bravolebs hawk as a side hustle.

But one of the hottest events of the weekend — and the event that felt the most communal of all — was "Get Sur'ved with Vanderpump Rules," which featured a screening of the Season 8 premiere followed by a panel with 12 of the show's stars, including Lisa Vanderpump herself. It was held at the Hammerstein Ballroom, which looked at capacity, meaning around 2,000 people were in attendance. (Later, BravoCon attendees who spent an extra hundred dollars for the privilege would return to the venue for the Pump Rules x House of Yes party, DJ'd by, who else, James Kennedy, and including a performance of "Good as Gold" from Scheana Marie.)

The Pump-themed festivities on Saturday began with a screening of the new season. As the first bars of Memoir's "Raise Your Glass" echoed throughout the event hall — "You know that it's our time” — the crowd could not contain themselves. The cheers grew louder as the theme went on — “These are the best days of our liiiives” — peaking when LVP made her grand, slow motion entrance onscreen, tossing a pink sparkly purse in her wake. Nothing can get the heart rate of a Vanderpump Rules fan up faster than that song... except hearing it played at full volume in a theater of full of thousands of Vanderpump Rules fans as it leads into the premiere of a brand new season.

There's a specificity to the Bravo fandom, which made it ripe for its own convention. The entire event was full of inside jokes and references to the network's various series. If someone who had never watched Bravo was dropped inside, they would have no idea what was going on.

Throughout the episode, the reactions kept coming. Everyone "oooh'd" at Jax Taylor and Tom Sandoval's fighting, and "woo'd" at Stassi Schroeder and fiancé Beau Clark doing absolutely nothing. Everyone cheered for Lala Kent being seven months sober, and laughed at Tom Schwartz's goofy nightgown. Everyone got the jokes. Everyone understood the callbacks. For 45 minutes, every single person in the Hammerstein Ballroom, every which way you looked, was enjoying the exact same, absurd, mesmerizing thing.

There's a specificity to the Bravo fandom, which made it ripe for its own convention. The entire event was full of inside jokes and references to the network's various series. If someone who had never watched Bravo was dropped inside, they would have no idea what was going on. Why is there a Southern themed bar decorated with framed photos of a woman wearing a caftan? Why is there a gallery that features giant fake fish on the wall and a plate of sprinkle cookies inside a glass case? Why does the entrance to the bathroom have a giant sign that reads, "Pat the puss"?

Literally none of it would make sense, which is what made it even better for Bravo fans, letting us feel set apart in our own weird little world for three days. To Bravo fans, the weekend was more than a chance to interact with reality stars — it was a bonding experience. As one fan put it during the Q&A portion of the Pump Rules panel, "I've never felt more seen." It's a sentiment I heard echoed numerous times during the convention.

Of course, that feeling of acceptance is something that happens at every type of fan convention. Trekkies and Whovians famously gather multiple times a year, worldwide — but "Bravoholics," as the network rather insensitively calls its viewers, haven't had their moment to really come together yet. With this being the inaugural BravoCon, the feeling of finally finding your people and being "seen" was all new, which might explain the warm glow on attendees' faces as they meandered around the venues, barely noticing that no one had properly chilled the Pump Rules rosé.

Sure, no one needs to feel validated in a large group setting for being able to list all of the Below Deck crews, past and present, or justified in their purchase of a Southern Charm pillow cover, but it is a warm and fuzzy feeling to be around people who wouldn't dare dismiss that interest or knowledge as "silly," as many people do when it comes to reality TV programming.

But that type of joy that can only come from a couple thousand people all connecting over the exact same, very particular thing is what filled the room during the Vanderpump Rules screening. There were laughs when Tom Schwartz and Tom Sandoval brought back their sidecar motorcycle. Recognition of a reaction GIF in the making when Katie Maloney took a long sip out of a straw after overhearing some juicy gossip. The aural equivalent of 2,000 eye rolls when Brian Carter was flirty with Kristen Doute even though everyone (on the show and in the audience) thought they were finally over. It was validation, acknowledgement, happiness.

Unlike other parts of BravoCon — the photo opps, Instagram "experiences," and merch — watching your favorite show with thousands of other people who love it, too, felt pure. Who knew that knowing it's not about the pasta could make someone feel so seen?

More like this
Kaitlyn Bristowe Said Chris Harrison Ignored Her After Her 'Bachelorette' Hosting Gig
By Grace Wehniainen
Airris From 'MAFS' Says He Doesn’t Regret Going To Decision Day With Jasmine
By Brad Witter
'Bachelor' Fans Think Rachel & Clayton Are Dating After This TikTok
By Grace Wehniainen
'RHOSLC’s Heather & Whitney Are Still On A “Friendship Break” After Season 3 Reunion
By Jake Viswanath
Get Even More From Bustle — Sign Up For The Newsletter
From hair trends to relationship advice, our daily newsletter has everything you need to sound like a person who’s on TikTok, even if you aren’t.