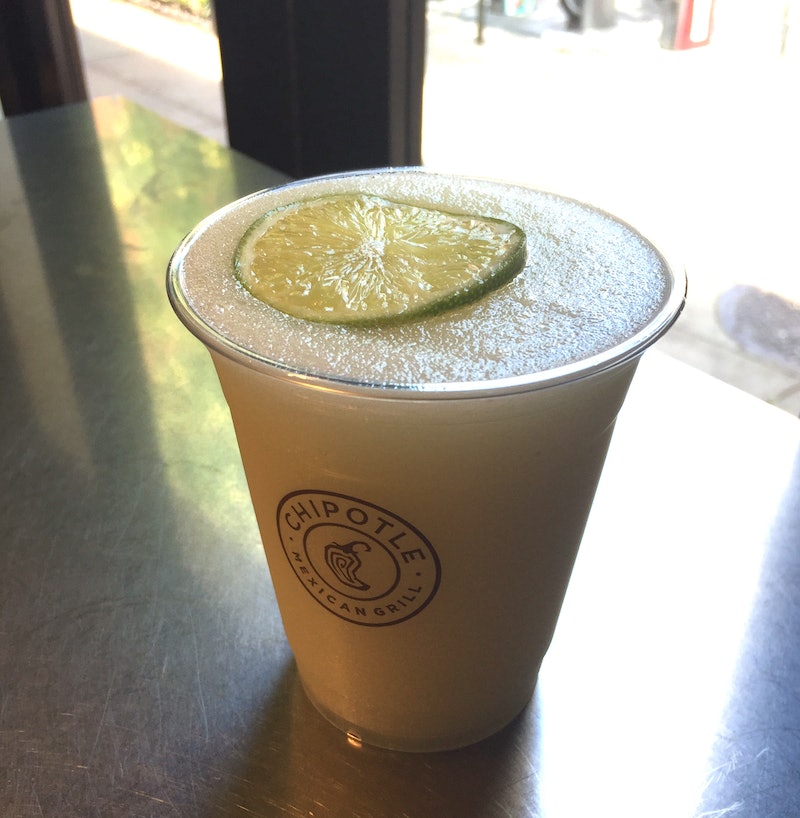 Margaritas probably aren't the first thing that come to mind when you think of Chipotle. But, it's time to readjust your thoughts about this casual dining Mexican restaurant. Because, Chipotle has frozen margaritas at its test kitchen, the NEXT Kitchen in NYC, and hundreds of other locations have offered shaken margaritas and beer for years. The test kitchen, located at 504 6th Avenue in New York City's Chelsea neighborhood, not only allows you to sample new menu items like queso — Chipotle's NEXT Kitchen also serves you frozen margaritas to complement your tasty test meal, according to an article by Melissa McCart on Eater.

The test kitchen has new equipment, including a frozen margarita machine that can blend you either a non-alcoholic strawberry or a classic margarita with blanco tequila, so you can get your chilled tequila libation even colder and faster than before.

Now, Chipotle has been serving beer and margaritas for a while, but I honestly had no idea because I usually get my burrito bowl to go, not all locations serve alcohol, and you can't take any margies or beer out of the restaurant. But casual dining booze seems like a pretty genius idea.

While the margaritas at most locations are shaken with Patron or Sauza, the frozen margies at the Chipotle test kitchen are perfect for this never-ending summer swelter. And, margaritas and Mexican food go together like pretzels and beer, or coffee and doughnuts.

Plus, you're going to need a frozen margie to wash down the newest Chipotle menu item at the test kitchen, queso. Yes, Chipotle will finally serve queso, which has long been demanded by customers, but was difficult to offer while also maintaining its Food With Integrity philosophy.

Chipotle NEXT Kitchen's experimental tasting menu will change every four months, Eater reported. The restaurant only uses 51 ingredients, all of which you can pronounce. This is pretty rare in an age when some eateries refuse to even make their ingredients list public.

If you're lucky enough to live in, or be visiting NYC this summer, make sure to head to the test kitchen for a frozen margie, and a warm side of queso — both made from things you won't have to look up on Google.