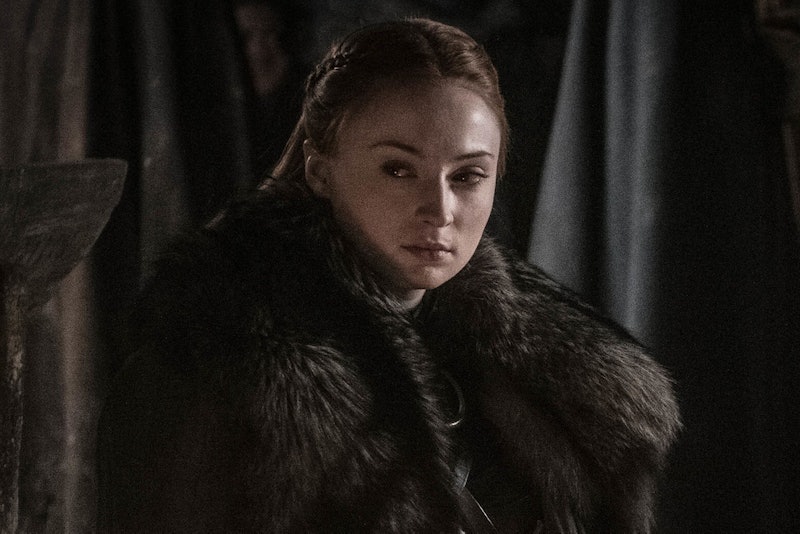 When you play the game of thrones, you either win or you die. It feels increasingly unlikely that either Cersei or Daenerys will be left standing when the Last War is over. But if they both die, who wins? The signs that Sansa Stark will win the Iron Throne are mounting, and the "little bird" turned Lady of Winterfell may be Queen Sansa of the Seven Kingdoms by the time Game Of Thrones wraps up its final season.

To borrow a famous line from another popular genre TV show that also suffered from out-sized expectations and outraged reactions in its final season: "It only ends once; anything that happens before that is just progress." Opinions surrounding Game Of Thrones' final season have been just as polarized as those to Lost's swan song, and a lot hinges on how the finale wraps things up (or doesn't). Several characters have sat on the Iron Throne throughout the series — Robert, Joffrey, Tommen, and now Cersei — but clearly none of them "won," since the show (and the game) continued. But someone has to end up on the throne at the end… and it's looking more and more likely that it will be Sansa.

Here are some of the signs that the final two episodes of Thrones will be the rise of Queen Sansa, First Of Her Name.

Cersei was one of the first people to show naïve young Sansa that the world was crueler than it was in her fantasies when she ordered the execution of her direwolf, Lady, back in the series' second episode. Ever since then, Sansa's and Cersei's fates have been intertwined. The Stark learned a lot from the Lannister, and Sansa has admitted that she still holds a certain amount of respect for Cersei. She's proven countless times that she's the only one who understands Cersei — better even than Cersei's own brother.

If Sansa's role in the narrative is essentially to become the best version of Cersei — one equally smart and ambitious but less ruled by cruelty and more by compassion — then surely that narrative should end in Sansa following in Cersei's footsteps, and ascending to the Iron Throne after her death? It would certainly be fitting, and would complete Sansa's transformation from the student into the master, if she succeeded Cersei as the queen of Westeros.

Among the many long-awaited reunions Season 8 has provided was the first meeting of Sansa and Tyrion since they parted ways at the Purple Wedding. Although their marriage was annulled (under the justification that it had gone unconsummated) so Sansa could marry Ramsay, they clearly still share a connection. They bonded over their fond memory of Joffrey's gruesome demise and, despite being a bit disappointed to learn that Tyrion wasn't as infallibly clever as she believed when she was young, Sansa still admitted that he was "the best of them" when it came to the men in her life.

Was their tender scene together in the crypts during the Battle of Winterfell just a fleeting moment? Or was it a tease for a greater union between the two characters before the show is over? Tyrion has been serving as the Hand of the Queen to Daenerys since the end of Season 6; if the Mother of Dragons were to fall in the impending Battle for King's Landing, might Tyrion feel compelled to offer his services to another great lady? It would be a satisfying conclusion to both their character arcs to see Sansa as queen and Tyrion as her Hand, ruling Westeros together with their good hearts and sharp minds.

3. The Starks Are One Of The Last Great Houses

If Cersei and Daenerys were to fall in battle, that would effectively be the end of the Lannister and Targaryen dynasties. They wouldn't be the only great houses effectively wiped out by the events of the series: other families that were decimated by the War of the Five Kings and its aftermath include the Boltons, the Freys, the Karstarks, the Martells, the Mormonts, the Tyrells, and the Umbers.

Who's even left to pick up the pieces? There's one Tarly left, but it's unclear if Sam is still beholden to his vows of either the Night's Watch or being a maester, either of which would prohibit him from holding title. There's a couple of Greyjoys knocking around, but neither Euron nor Yara seem destined for the Iron Throne. There's an Arryn left in the Vale, but wimpy Robin is never going to rule. The extinct Baratheon line was recently resuscitated when Daenerys legitimized Gendry, but the people seem unlikely to support an up-jumped bastard as king. That leaves the Starks; with both Bran and Arya clearly uninterested in ruling, Sansa is pretty much the only respected member of a major house left to take over once the war is done.

4. She's The Only One Thinking About What Comes After

While Jon and Dany were laser-focused on the Night King and his army, Sansa was the only person sparing a thought for what would happen after they won the Great War. Of course, none of Sansa's concerns about the future would have mattered if they'd lost… but they didn't. They say you should plan to succeed and prepare to fail, and Sansa did exactly that. Now Daenerys seems so laser-focused on defeating Cersei that it's unclear what her plan is after that. How does she actually plan on breaking the wheel? What would that even look like? Will she ever resolve the lingering matter of succession?

You know who thinks about these kinds of questions? Sansa Stark. While other characters were busy sinking under existential despair, she remained busy dealing with practical matters like properly outfitting her soldiers' armor and figuring out how to feed her hungry people. The realm needs a ruler who can keep one eye on the ball while also thinking about what's next. The show has illustrated time and again that this kind of strategizing is Sansa's strength. Hopefully she'll get to use it as queen.

5. The People Love Her

A monarch can have a good adviser, a strong family name, and a sharp strategic mind — but none of that will matter if the people aren't behind you. It's clear that Sansa engenders not just blind loyalty, but true love and devotion from her subjects. Think of all the various people who have been drawn to her over the years, who have taught her and stood beside her and fought for her and even died for her: people like Theon Greyjoy, Sandor Clegane, Tyrion Lannister, Shae, Petyr Baelish, Robin Arryn, Yohn Royce, Ser Dontos, and more.

These are characters from very different walks of life; the only thing any of them have in common is that they found themselves drawn to Sansa's strength and kind heart. That's a skill that can't be taught, and it would make Sansa a very effective ruler.

6. The Writers Love Her

There's no question that showrunners David Benioff and D.B. Weiss have great affection for Sansa. In George R.R. Martin's original outline for A Song Of Ice And Fire, the author lists five characters that are central to his story, and Sansa is not one of them. (Martin's five favorites are Jon, Daenerys, Tyrion, Arya, and Bran.) When Benioff & Weiss moved Sansa to Winterfell in Season 5, that storyline yielded some controversy — but also resulted in Sansa becoming a far more integral figure on the show than she ever has been on the page.

More than any of the other main characters in the series, at this point Sansa is almost more a creation of Benioff & Weiss than she is of Martin's. It's hard to imagine them not having big plans for their beloved Sansa — who has also become a fan-favorite character in the years since she has grown more central to the story — as the story draws to its conclusion. Sansa might not end up on the Iron Throne in the books… but without source material to keep them beholden, there's no reason Benioff & Weiss can't elevate their favorite character to queen.

Even though there have been teases for years that Dany's storyline would culminate in a "Mad Queen" arc, some fans are upset about this outcome for legitimate reasons. It will be disappointing if the entirety of Game Of Thrones culminates in Westeros needing to be saved from two "mad" (read: hysterical, etc.) women by an even-tempered man like Jon Snow. If the show doesn't end with Cersei or Daenerys on the throne, it would undoubtedly be a bad look for a man to end up on it instead.

It would also be unfortunate if Cersei Lannister was the only example of female leadership the patriarchal society of Westeros ever experienced. Unless Sansa comes in and salvages things, it's difficult to imagine a woman ever being allowed to rule the Seven Kingdoms again. King after king has made a mess of the continent for centuries, and men are still given unlimited chances to rule; why shouldn't women be given the same benefit of the doubt? Cersei broke the dragonglass ceiling by sheer force of will — and now it's time for Sansa to whip Westeros into shape.

Of course, all of this is assuming that there will even be an Iron Throne by the time the show ends.

This article was originally published on May 12, 2019