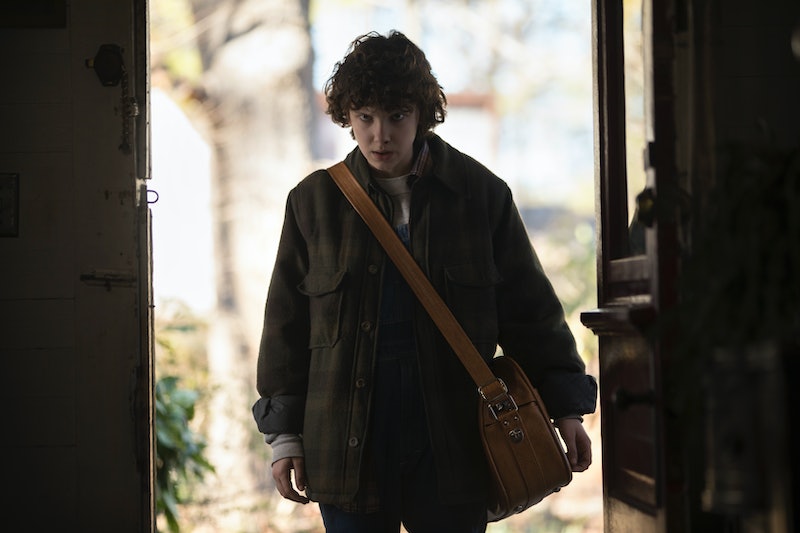 On Friday, Oct. 13, Netflix released the final Stranger Things Season 2 trailer before the season premiere on Oct. 27, and it was packed with clues. There's one major hint at what could be ahead for Eleven that it seems some fans missed. According to BuzzFeed, the new Stranger Things trailer hints that Eleven is going home in Season 2. This could be huge for the waffle-loving young woman, but the development also has the potential to shatter hearts.

In Season 1, the show introduced Terry Ives, a woman who participated in a series of studies involving psychedelics and sensory-deprivation isolation tanks. The studies were conducted by Eleven's Papa, Dr. Brenner. Terry didn't know she was pregnant at the time of the experiments, and she was later told that she miscarried her daughter, Jane, during her third-trimester. Terry never believed the story, and she tried to sue Brenner for kidnapping her daughter. For 12 years, she's been waiting with a nursery for Jane to come home. Even though she no longer speaks, Terry is still waiting for her daughter. Now she might finally be returning home.

Last season, it was all but confirmed that Eleven is Jane, and in a scene in the trailer, she appears to be standing in the doorway of Terry's house. While some of the decorations are in different places, BuzzFeed points out that it's clearly the same home that Joyce and Hopper visited during their search for Will. That means a mother-daughter reunion could be on the horizon for Eleven and Terry, but this being Stranger Things, don't expect it to be a happy one.

Eleven's longing for home and a sense of normalcy became her character's driving force as the season progressed. There was nothing she wouldn't do for Mike and her friends, because they were the first people who ever showed her real kindness. For Eleven, their love and support proved that she was more than just a weapon, and that she could be valued as a person, and not just as a tool to be used by Brenner and his shady organization.

If Eleven ends up meeting Terry, it's going to be a huge deal. Eleven's never had a chance to know who her mother is, or where she came from. Right now, it's unclear just how much Terry will be able to interact with Eleven, but simply giving the young girl that moment of connection could be powerful.

There's even a small chance that by finding her mother, Eleven could help bring Terry back to the real world. In an alternate universe, these two could live happily ever after as mother and daughter, with an assist from Aunt Becky. But there's nothing perfect about the monster-filled world that Eleven and her friends live in.

For Eleven, this means a happy ending is probably out of reach. If anything, Stranger Things surely has more twists in store for the audience. There's still a chance that Terry isn't actually Eleven's mom — or worse, she is, and "Aunt Becky" is working with the bad guys to keep an eye on Terry. If Eleven really is at the Ives' home in the Season 2 trailer, that only raises more questions. Most importantly, how did she find out about Terry? Either she's been in contact with Hopper or Joyce, or someone could be leading her into a trap.

After everything this amazing young woman has been through, she deserves a win, but the trailer as a whole reveals that Eleven is in for another tough season. Not only is she still dealing with the Upside Down, she's also feeling the toll of using her telekinetic abilities, and possibly reuniting with the mother she never knew. Poor Eleven just can't catch a break, but maybe she can at least have a reunion with her maybe mom before everything goes completely bonkers in Season 2.