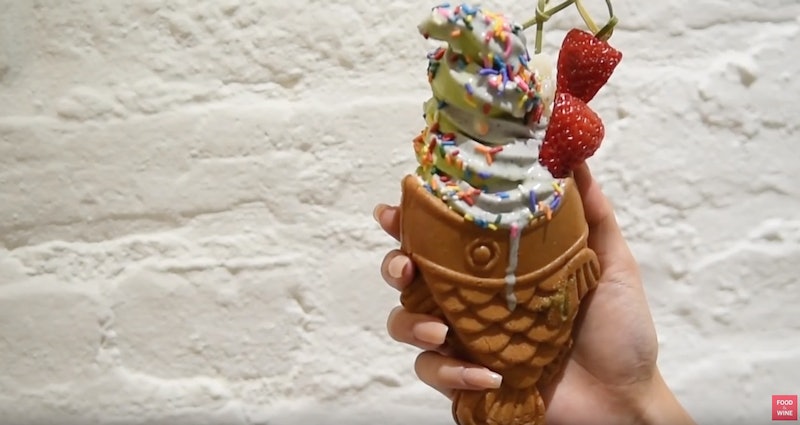 I think we can safely call 2017 the year of the unicorn. The Starbucks Unicorn Frappuccino started lighting up Instagram earlier this year, and the rainbow food trend quickly spilled over to cakes, cookies, noodles, toast, and more. Now, this unicorn ice cream in a fish-shaped cone from Taiyaki in New York City is going to be your new Instagram-worthy summer dessert. Because, what says summer more than ice cream, fish, and unicorns?

Taiyaki, a Japanese fish-shaped cake, is most commonly filled with bean paste made from sweetened adzuki beans. But, making it taste like a waffle, and filling it with ice cream sounds so much better. According to the Taiyaki website, the fish is a common gesture of good luck and celebration, so basically the unicorn ice cream in a fish-shaped cone is demanding to be Instagrammed.

"The best part about these treats isn’t their cuteness," Catherine Smith wrote on the Huffington Post. "None of the beautiful photos I saw online captured their most surprising and delightful characteristic: The cone is still warm when they serve it to you."

Cold, unicorn-swirled soft serve in warn fish-shaped cone means that you're going to have to inhale your ice cream as soon as you get the perfect snap, which shouldn't be a problem because it's rumored to be absolutely delicious.

While Taiyaki unicorn ice cream in a fish-shaped cone is a beautiful addition to your social media feed, "Taiyaki is more than just a pretty face," Priya Krishna noted on Zagat. "You can customize your order — I got one with a matcha and black sesame ice cream swirl (there are more plain flavors, too, like vanilla or chocolate), red bean filling, a wafer swizzle and mochi, to finish."

So, aside from its Instagram-worthy factor, what inspired the creators of this latest viral food trend? According to the New York Post, Taiyaki co-owner and chef Jimmy Chen said, “We really wanted to bring taiyaki, that represents so much culture, back to our lives here in NYC.”

The owners, both in their early 20s, told NTDTV that they tested more than 100 recipes over a two-month period to find the tastiest marriage of American and Japanese-influenced culture. And, according to the social media buzz, the young entrepreneurs seem to have hit the proverbial jackpot.

So, if you lucky enough to be in NYC this summer, head to Taiyaki to get your "unicone" on. You won't be sorry.