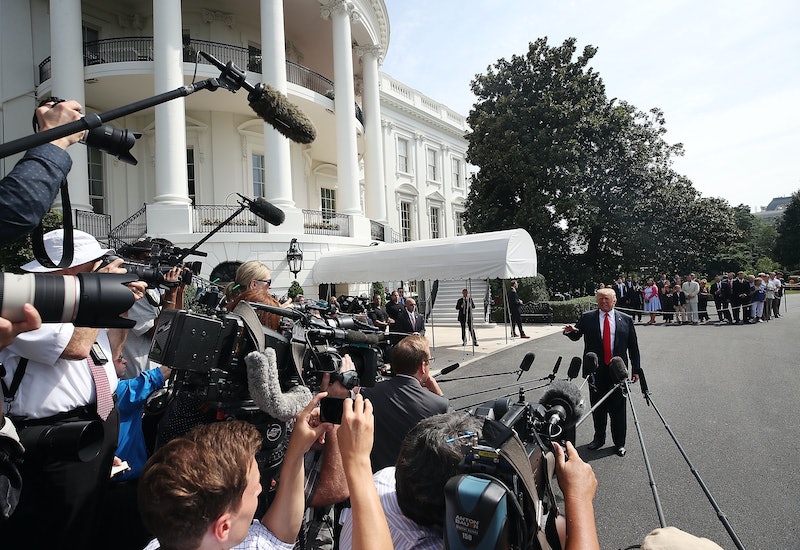 Our nation's 16th president may have addressed his constituents via parchment paper sealed with wax more often than flitting thumbs on a smartphone keyboard, but President Donald Trump says Honest Abe was just as harshly criticized for what he had to say. At a Montana rally Thursday night, Trump said "Fake News" attacked Abraham Lincoln after the Gettysburg address, just as Trump says it plagues him.

"You know when Abraham Lincoln made that Gettysburg Address speech, the great speech, you know he was ridiculed?" said Trump Thursday night, The Hill reports. "He was excoriated by the fake news. They had fake news then. They said it was a terrible, terrible speech."

Lincoln's speech, notable for its brevity, is today one of the most well-known presidential addresses. Few students of American history can hear the words "Fourscore and seven years ago..." without at least a hint of recognition.

The speech was delivered at the battleground of Gettysburg, Pennsylvania, on Nov. 19, 1863, just four months after Civil War soldiers fought one of the bloodiest battles of the period. Lincoln memorialized the soldiers' actions in his speech, saying, "The world will little note, nor long remember what we say here, but it can never forget what they did here."

According to Trump, the public said Lincoln's words "may have been the greatest speech ever made in America" just 50 years after his death.

While whatever happens to Trump's legacy is up in the air, it's fair to say that Trump's account of Lincoln's reputation isn't entirely true. The president could be referring to one poor review, published in 1863, that the publication humorously retracted 150 years later, making headlines in 2013. At the time of Lincoln's address, Harrisburg's Patriot & Union newspaper published an account of the Gettysburg events, with only one harshly-worded paragraph dedicated to Lincoln: "We pass over the silly remarks of the President. For the credit of the nation we are willing that the veil of oblivion shall be dropped over them and that they shall be no more repeated or thought of."

Over 100 years later, that newspaper's descendant, The Patriot-News, walked back its historically notable words, writing, "Seven score and ten years ago, the forefathers of this media institution brought forth to its audience a judgment so flawed, so tainted by hubris, so lacking in the perspective history would bring, that it cannot remain unaddressed in our archives."

On the other hand, The New York Times, which Trump likes to call the "failing New York Times," wrote an arguably positive review of Lincoln's address in 1863. The Times special correspondent wrote that it was delivered "in a clear, loud tone of voice, which could be distinctly heard at the extreme limits of the large assemblage. It was delivered (or rather read from a sheet of paper which the speaker held in his hand) in a very deliberate manner, with strong emphasis, and with a most business-like air."

Whatever readers think of Lincoln's original reviews, his words have certainly gone down in history with notoriety. Only time will tell how America remembers Trump.