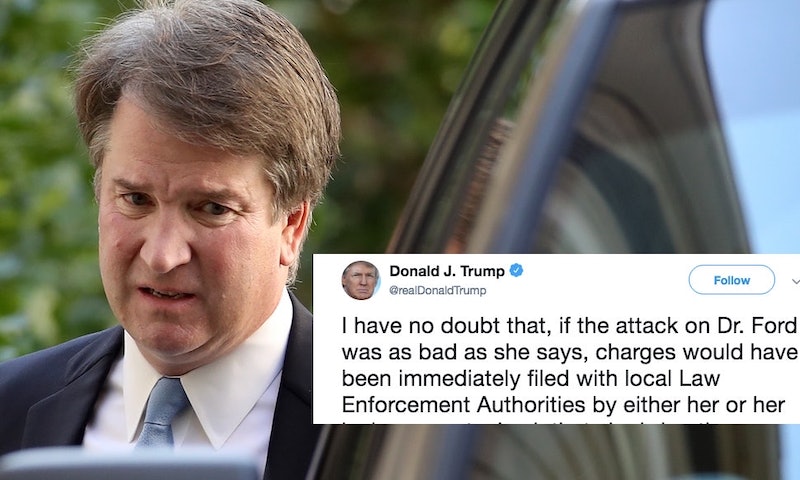 On Friday, following days of reports around his Supreme Court nominee, President Donald Trump tweeted about Christine Blasey Ford and implied that her accusations against Brett Kavanaugh are false if she didn't report the sexual assault to the police when it allegedly occurred. Far from being evidence against her allegations, Ford's silence fits the pattern that many survivors use to grapple with their trauma. What's more, Trump's tweet uses just the sort of shaming rhetoric that helps discourage victims from speaking out.

Ford alleges that Kavanaugh tried to rape her at a party when they were both in high school (he categorically denies this). Ford told The Washington Post that she didn't tell her parents at the time because she was afraid they would be angry with her for attending a party with underage drinking. She says that she remembers thinking to herself, "I'm not ever telling anyone this," and reportedly did not do so in detail until a couples therapy session with her husband in 2012.

Some would argue that the fact that Ford didn't get justice or support for the alleged incident at the time fits statistics about survivors. But in a Friday morning tweet, President Trump suggested that it's discrediting:

Shortly after, he added, "The radical left lawyers want the FBI to get involved NOW. Why didn't someone call the FBI 36 years ago?"

But if Ford's allegations are true, her decision not to approach the authorities is actually more common than not. According to RAINN, only 31 percent of sexual assault survivors report their stories to the police.

There are many reasons why a victim might decide not to come forward. First of all, they're unlikely to get justice by doing so. RAINN reports that only six out of every 1,000 rapists are imprisoned for their actions. A 2013 Justice Department study of people who refrained from reporting sexual violence crimes between 2005 and 2010 found that 15 percent didn't act because they believed the police either "would not do anything" or "could not do anything to help."

Other reasons responders gave for not alerting the authorities included that they were "advised not to report," that they "did not want to get [the] offender in trouble with law," and that they had a "fear of reprisal." In 2016, the U.S. Equal Employment Opportunity Commission estimated that three-quarters of sexual harassment cases in the workplace go unreported, and referenced a 2003 study indicating that around the same number of those who did report "faced some form of retaliation" for doing so.

Victims must also face the reactions of people who learn of their experience, which can add new layers of trauma. A 2006 study from the American Journal of Psychology found that these responses can cause rape survivors to experience "feelings of self-blame" and "uncertainty about whether their experiences qualified as rape" — a phenomenon we now refer to as "gaslighting."

When a survivor knows that their story would draw significant media attention, as in the case of the Kavanaugh allegations, they may feel even more reluctant to speak out. Ford told The Post that she decided not to go public with her accusations when it seemed as though Kavanaugh's nomination was going to be successful. "Why suffer through the annihilation if it's not going to matter?" she said.

Ford may testify about her alleged assault in front of the Senate Judiciary Committee next week. She has agreed to do so, though she's declined the request to appear before the committee on Monday.