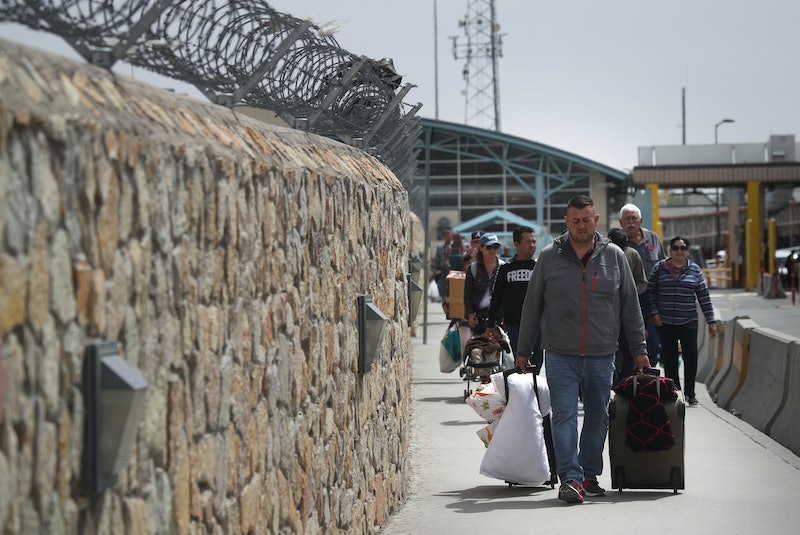 The Trump administration has undertaken numerous efforts to limit immigration into the United States, including by instituting travel bans, lowering the number of refugees allowed in, and restricting some legal immigration, just to name a few. The latest effort, however, targets a particularly vulnerable group of people arriving at the U.S. border. President Donald Trump's memo would change the policy for asylum seekers in a significant way, even going so far as to require asylum seekers to pay a fee in order to have their cases considered.

“The purpose of this memorandum is to strengthen asylum procedures to safeguard our system against rampant abuse of our asylum process,” Trump said about the memo, which he sent to acting Homeland Security Secretary Kevin McAleenan and Attorney General William Barr, according to The New York Times.

While Congress is the body that sets asylum policy, the memo directs the Department of Homeland Security and the Department of Justice to write a set of new proposals on asylum law, according to CNN. Specifically, the changes laid out in the memo include charging a fee for applicants requesting asylum or work permits, requiring that all cases be processed in 180 days, and blocking any applicants who have ever entered the United States without documents from getting the right to work until they've actually been granted asylum, CNN wrote.

Currently, applying for asylum doesn't require a fee and applicants are allowed to work while their case is processed, according to USA Today. Trump's critics, USA Today wrote, say that requiring a fee and preventing some applicants from working would push the already vulnerable asylum seekers into an even more vulnerable position, and could even make the process impossible for some. Across the globe, very few countries charge fees for asylum seekers, according to the Library of Congress website.

“The majority of people coming to the United States seeking asylum are coming with little more than the shirts on their back,” said Victoria Neilson, a former U.S. Citizenship and Immigration Services official, according to The Guardian.

Asylum applicants now currently have to wait an average of two years before their cases are processed, but they're allowed to stay in the United States and can also apply for permits to legally work during most of that time, according to The New York Times. As BuzzFeed News reported earlier in April, however, the administration was already pushing to make asylum applicants wait much longer before they could apply for a work permit. The new proposal would force them to wait a full year, meaning that they would have to have a different way of supporting themselves in the meantime.

“By making the majority of arriving asylum seekers ineligible for employment authorization, charging migrants to apply for asylum, and taking away other forms of relief," Migration Policy Institute analyst Sarah Pierce told BuzzFeed News, "the administration is trying to deter future asylum seekers from arriving at the US border, limit how many can apply for asylum, and limit how many ultimately get to stay in the United States.”