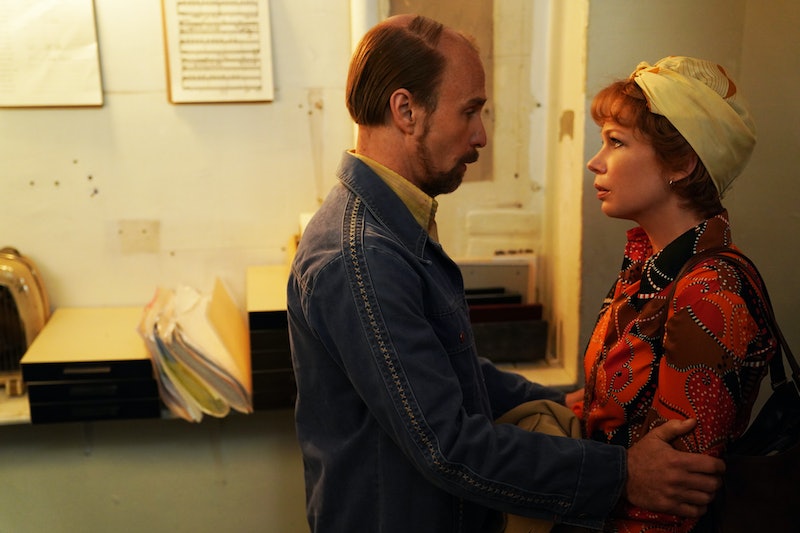 We've known how Fosse/Verdon would end since the very beginning, but that doesn't make Bob Fosse collapsing in Gwen Verdon's arms any less moving in the miniseries finale. But some fans might be wondering if Verdon really with Fosse when he died, given that it's all so dramatic. Is that really what happened?

In a word: yes. Just as Paddy Chayefsky joked in a previous episode, dramatists tend to be dramatic — and an artist like Fosse couldn't have asked for a more artistic end to his story, in the arms of his soulmate as they revived one of the musicals that brought them together.

The New York Times reported at the time that Fosse collapsed in his hotel room with Verdon at his side. However, according to both Sam Wasson's biography Fosse and the director's obituary in the Washington Post, in 1987 Fosse collapsed on Pennsylvania Avenue between the Willard Hotel and the National Theatre while walking with Verdon to attend a performance of Sweet Charity in Washington D.C.. Fosse was taken to George Washington Hospital where he was pronounced dead less than an hour later. The obituary, by the way, ran in the same paper as the show's review.

The revival's cast, which included Debbie Allen and Bebe Neuwirth, were informed after the show. The Times reported they were told at an after party at the Old Ebbitt Grill, though the Washington Post reports they were informed before... who can say?

According to composer Cy Coleman, per the Washington Post, he had gone looking for Fosse when he didn't show up for curtain, and Verdon later told him that Fosse "felt faint and finally his knees buckled. She couldn't deal with it so she called an ambulance."

By 2019's Google Maps walking directions, it would take about two minutes to get from that hotel to that theatre, so it's not too much of a stretch to imagine he collapsed under the marquis. However, according to the obituary Verdon told Coleman that they were in front of the hotel, not the theatre, so the FX series may have fudged that a bit. The Wasson biography says it was the corner of Pennsylvania Avenue and 14th Street — and, like we see in the finale, Verdon initially thought he was having a seizure.

Unlike the marquis for the show seen in the series, the Washington Post at least notes that Verdon was co-directing Charity. The bond between Fosse and Verdon may have been one of the strangest and strongest in history, but Verdon never got the credit she deserved in life.

All That Jazz, the film tightly based on Fosse's career/life and first heart attack, kills off its lead character without any kind of catharsis or reconciliation with his ex-wife. However, in real life Fosse and Verdon were reunited, and working together again. Fosse learned the lesson that he wouldn't let his characters learn, even if he never really changed.

As Paddy Chayefsky predicted in the episode when he laid out how he would have ended All That Jazz were it his own screenplay, it was too late... and Fosse died anyway. If the truth isn't stranger than fiction, it's definitely more dramatic.

More like this
The Best 'Grey's Anatomy' Intern Moments, From MAGIC to Glasses
By Grace Wehniainen
24 Years Ago, 'Friends' Dropped Its Most Underrated Ross & Rachel Episode
By Grace Wehniainen
Netflix Reveals First Look At Wednesday In The 'Addams Family' Spinoff Series
By Bustle Editors
The ‘Kevin Can F**k Himself’ Season 2 Finale Twist Is A Full Circle Moment
By Grace Wehniainen
Get Even More From Bustle — Sign Up For The Newsletter