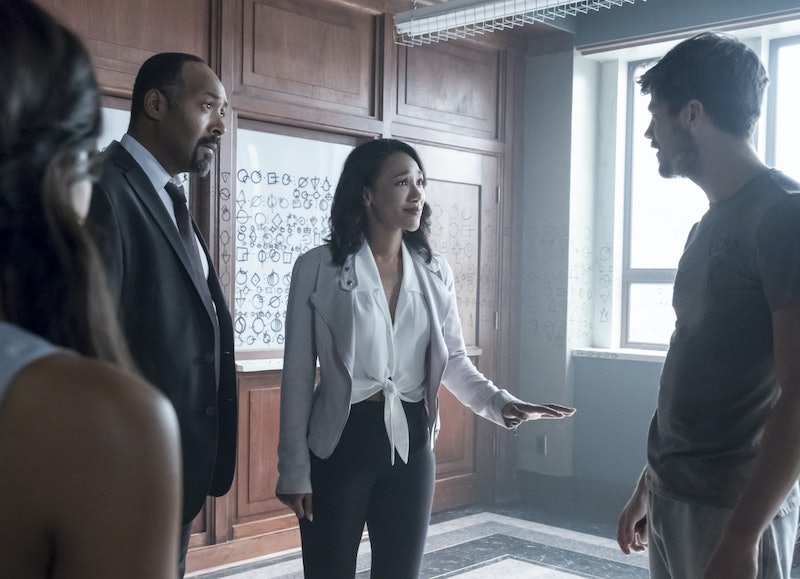 Barry's long-awaited return to Central City goes, well, not entirely the way Iris, Joe, Cisco, or the rest of Team Flash (or Team Kid Flash, if you ask Wally) imagined. In the Season 4 premiere "The Flash Reborn," Barry comes back from the Speed Force, but he isn't the same Barry that went in all those months ago. Physically, Barry is back, but mentally, he isn't all there, mumbling about stars and writing symbols on the wall. By the end of the episode, he has fully recovered, but what Barry's writings mean on The Flash remains a mystery.

"The Flash Reborn" picks up six months after Barry went into the Speed Force, and with no way to take him out of the Speed Force prison, Team Flash has made due with Cisco and Kid Flash taking over superhero duties and Iris acting as the boss. But they're struggling. So when Cisco figures out a way to bring Barry back, the entire team is pretty ecstatic (though Iris requires some convincing). Which makes Barry's state when he returns all the more troubling. When Barry finally escapes the Speed Force, he isn't the same. Sitting in a room with Joe, Iris, Cisco, Wally, and Caitlin, Barry doesn't recognize his Team Flash family. Instead, he obsesses over writing a series of symbols on any available surface, covering the walls with triangles, circles, and squares. "Can you hear the stars?" he murmurs.

Team Flash decides to take Barry to STAR Labs for some testing, but after Caitlin performs some tests, they're still stumped as to why he isn't his normal self. She theorizes that either Barry has some sort of temporary neurological condition or that his time in the Speed Force has driven him mad. In Central City, Barry was only in the Speed Force for six months, but who knows how time works in the Speed Force. Not satisfied with these answers, Cisco decides that Barry's writings couldn't be the ramblings of a mad man. They have to mean something. Using computer programs to decode the writings, Cisco is able to translate the symbols into a phrase: "This house is bitchin'."

It seems unlikely that after six months in the Speed Force, Barry returned to tell the team, "This house is bitchin'." So, either the writing means something else, or there's more to the phrase and symbols than even Cisco can decipher. While he was writing, Barry says that the symbols were "a whole new way of looking at Physics." Looking at his work, he tells the team it would "change the way we think about everything." Could the symbols actually unlock a secret to the science Team Flash uses to solve crimes every day?

After Iris gets Barry to come back from his Speed Force-induced trance, our favorite speedster still doesn't remember anything that happened to him inside the Speed Force. He doesn't remember escaping the prison world, and he certainly has no recollection of writing symbols all over the walls. Plus, when asked, he doesn't recognize anything about "This house is bitchin'." So, what did it all mean? Well, we have no idea. But, this is The Flash — nothing happens by accident. The writings, which Cisco conveniently preserves in his computer program, definitely mean something. Perhaps it's something that will help Barry in his endless quest to run faster, or maybe it really is something that will help redefine how they approach Physics going forward. Maybe it will have something to do with a cure for Caitlin's Killer Frost alter-ego.

It could mean anything, but the important thing to remember is that there's no way it's just gibberish. Make no mistake: Barry's writings on The Flash have some significance. Team Flash just has to figure out what that something is.