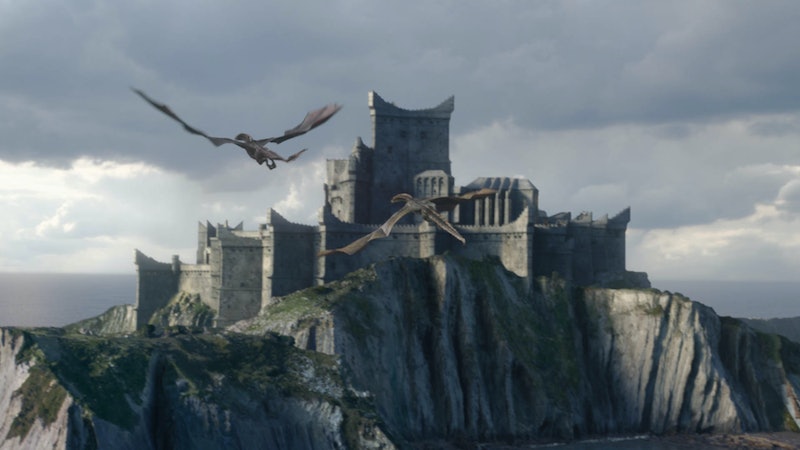 Daenerys' dragons are dropping left and right — but is there any significance to which ones have survived so far? Ever since one of the dragons turned icy, fans have been trying to determine the significance or meaning of their individual destinies. Because everything in this series has importance, the meaning of the dragon names in Game of Thrones could be connected to Dany's fate. Or at the very least, indicate their importance to the Dragon Queen.

Daenerys Targaryen hasn't called her children by first name too many times on the HBO series, but their names are Viserion, Rhaegal, and Drogon. They're all male, too, by the way — so the possibility of any more dragon eggs hatching any time soon is slim.

As the mother of dragons, Daenerys kept the names in her family. All three dragons are given names that are significant to her and House Targaryen, with a twist. She may not think that she is able to bare human children and carry on her family's legacy, but she did her best to do so in the dragon names. Here's the breakdown:

Viserion Is Named After Viserys Targaryen

The first dragon to turn bad, though not by choice or "Targaryen madness," was the one named after Daenerys' petulant and tyrannical brother. In George R. R. Martin's A Song Of Ice and Fire, Daenerys says that "Viserys was cruel and weak and frightened, yet he was my brother still. His dragon will do what he could not."

Viserion has now died twice, and it's actually pretty tragic considering what Dany wanted for him. He was killed by the Night King, and then again by Arya (by proxy) when she stabbed the Night King. Even though Viserys was of the first chaotic baddie on Game of Thrones, his dragon didn't deserve that fate.

Rhaegal Is Named After Rhaegar Targaryen

The dragon that Jon rides is named after Daenerys' other brother, also known as Jon Snow's father, the Prince of Dragonstone. Interesting, isn't it, that the ending Daenerys chose was an "L," that happens to be Lyanna Stark's first initial. Daenerys' mother was also Rhaella Targaryen; "Rhae" is a common prefix in House Targaryen names. The stillborn son that Dany and Drogo had was named Rhaego, as well.

In Sunday's episode, Euron Greyjoy's many big arrows shot Rhaegal down into the narrow sea. Rhaegar, on the other hand, was killed near the water by Robert Baratheon — something that Daenerys mentioned to Gendry in the same episode that Rhaegal was killed. Interesting.

Drogon Is Named After Khal Drogo

The name also just sounds a lot like "dragon" — clever, Dany. The last one standing is named after the Mother of Dragons' first love and Dothraki husband. Drogon is dark, humungous, and the clear favorite that Daenerys chooses to ride.

Daenerys never really knew Rhaegar, and had a fraught relationship with Viserys, so it's fitting that Drogon is the last dragon standing. Unless Bran brings Rhaegal back to life by warging into him, or using some other kind of Three-Eyed Raven magic, and he becomes a kind of water dragon (we've had fire and ice dragons so, like, why not) — two dragons are now dead. So are all theories that the dragons are dying in the order of their namesakes, because while historically Drogon died after Viserys, they both died after Rhaegal and Lyanna.

While the names certainly have meaning, whether or not they are clues to the end of Game of Thrones remains to be seen.