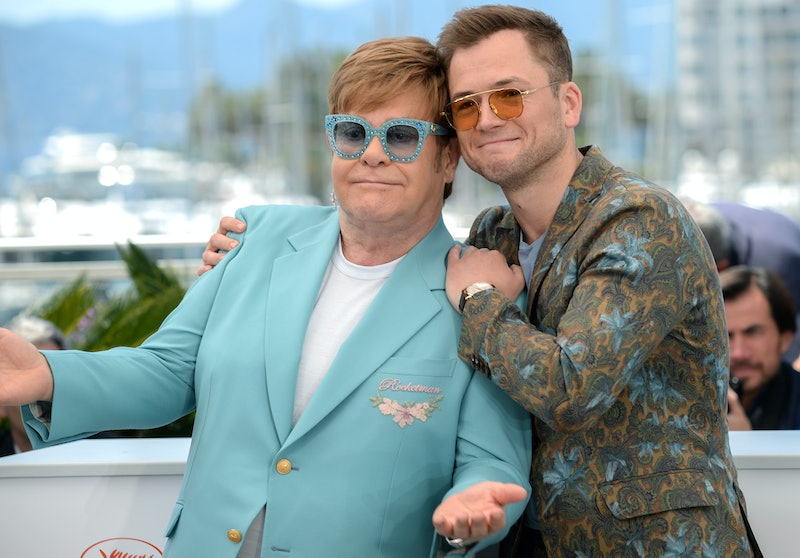 He thought it was gonna be a long, long time before he ever saw his life on the big screen, but Rocketman, a biopic focusing on the tumultuous 20 years of Elton John's rise from obscure, shy songwriter to glittering, larger-than-life stadium star, is hitting theaters May 31. So far, the reception of Dexter Fletcher's biopic has been positive, including at Cannes, where the film had its premiere. But there's one opinion that counts most when it comes to the story of his life. What does Elton John think of Rocketman? Not only is John pleased the film finally came to fruition, he also thinks it's the version he truly wanted to be made.

The winding yellow-brick road to getting the film made took well over a decade. In a 2011 Guardian interview, John said he had a script ready with Billy Elliot writer Lee Hall. "I'd just like to make a really great film about my life story...It will be more of a fantasy — Moulin Rouge type of stuff. Obviously, it's not going to be your normal, run-of-the-mill film. My life's been so surreal, from buying a football club to God knows what." Per The Daily Mail, Tom Hardy was set to play John at one time. Ultimately, Kingsman: The Secret Service star Taron Egerton ended up winning the role. John serves as an executive producer on the movie.

The film focuses on John's early influences and family life before jumping forward to the '60s and '70s, when the artist met his longtime writing partner Bernie Taupin (Jamie Bell) and then manager and short-term boyfriend John Reid (Richard Madden). An Entertainment Tonight interviewer gave Elton a hug after seeing the film, declaring, "I don't think people understand the things you have been through in your life!" Elton wryly replied, "...and that's just 20 years of it too. I mean, I haven't seen the movie, but I know what's in it."

In a Paramount featurette, Elton said he was still stunned that he had a movie at Cannes. "I cried a lot the first time I saw it, and I cried a lot this time... there are some very, very dark moments in the film, but the music lifts it out of the darkness." He heaped praise on Egerton's performance, saying "Not only did he have to perform my life, he had to sing my life ... When I look at him singing and I look at him acting, I'm not looking at Taron Egerton. I'm looking at me. And that's what moves me — this is me."

He also defended the young actor against criticism saying a straight actor shouldn't or couldn't play a gay man. "That's all bullsh*t, I'm sorry," John told The Sun. "If people don’t like it, review-wise, or it doesn’t make one dollar, it’s the movie I wanted to make and that’s all that counts. I can look back and say, ‘You know what, I love it. I can live with it.'"

Talking to Variety, John did admit he had difficulty with some parts of the film. "It's hard to watch the family stuff. The drug stuff I can handle because I know I did it," he said. He added that, as he gets older, he understands now what his parents were going through, and that while he's not angry or bitter about it, "It did leave a scar and that scar took a long time to heal — and maybe it will never heal totally.” But out of every facet of his life, sequined and sober, on screen, his favorite to see was "the relationship with Bernie, it's the glue of the movie," he said. "Taron and Jamie Bell play both of them so perfectly ... That touched me a great deal because we've been together almost 50 years — to have a relationship be so strong and so loving means a lot in this business."