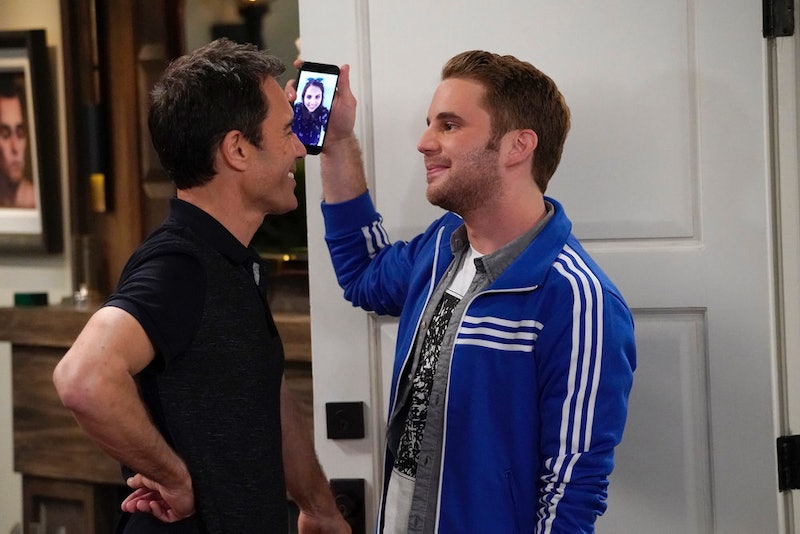 While it's a bit jarring at first to see the characters on Will & Grace dropping references to things that have happened since the show initially went off the air 11 years ago, the show does fit kind of seamlessly into 2017. That said, there are a few things referenced in the new season that might go over the heads of millennials, like Ben Platt's character in the Oct. 5 episode. What does "the night the lights went out in Georgia" mean, and why does Will keep saying it? The returning sitcom was tipping its hat to another classic.

In the episode, Will and Grace reminisce about time spent at a gay bar called The Cockpit. Grace loved that they used to play episodes of Designing Women on repeat. It's a known favorite of this dynamic duo, who would often catch reruns in marathons — remember those? Anyway, at the bar Grace and Will would say the speeches along with the characters, and they use "and that is the night the lights went out in Georgia" as an example.

Later in the episode, Will repeats the impression (but changes the verb tense up a bit) to conclude his epic speech about young people forgetting gay history to Blake, his younger date played Dear Evan Hansen star Platt. The moment we forget the steps taken to achieve equality and progress is the day it will be taken away all over again, is the point Will is trying to get across. While it's awesome that young women, people of color, and/or LGBTQ youth have grown up without some of the restraints and oppressions that their predecessors faced does not mean that bigotry is gone forever. History is important.

And with that sassy punchline, the NBC sitcom is referencing an iconic confrontation between Julia Sugarbaker (Dixie Carter) and a beauty queen from the Peach State in defense of her sister in a memorable episode of Designing Women. The phrase is the end to a truly impressive comedic monologue. If you're not familiar with the '80s sitcom, check out the scene in all its big hair and shoulder pad glory. Will's speech held a little more weight than the original, as it's about a serious and relevant subject matter, but both deserved this epic conclusion.

However, there's a bit of a reference Inception thing going on here. Designing Women was borrowing the phrase as well. "The Night the Lights Went Out in Georgia" is the name of a Southern gothic song written in 1972 by Bobby Russell and recorded by Vicky Lawrence. Later, Reba McEntire recorded a popular country cover. The synopsis of that song involves infidelity, wrongful conviction, the justice system, and a killer reveal. That's not the usual Will & Grace content, but the reference is evocative. Fun fact — the song was offered to Sonny and Cher, key celebrities in the Will & Grace universe, but Sonny turned it down.

There is also a 1981 movie starring Dennis Quaid and Mark Hamill titled The Night The Lights Went Out In Georgia. According to the Internet Movie Database, this movie is about what happens when a wannabe country star from a small town and his kid sister/manager cross paths with a sheriff who threatens that Nashville dream. Again, it's unclear why a phrase with such dark tales attached is so beloved by sitcom characters, but it does pack one heck of a punch.

Platt's character Blake, who thinks that cooking dinner is "throwback Thursday" and candles must come from Goop, has not heard of any of these things. And that makes him a refreshing kind of young person. He doesn't ironically enjoy older stuff or proclaim himself a nostalgic '90s kid. He is unapologetically young and blissfully uninformed, which made for a good teaching moment from Will. The fact that he got to do a Designing Women impression was just the icing on the retro cake.