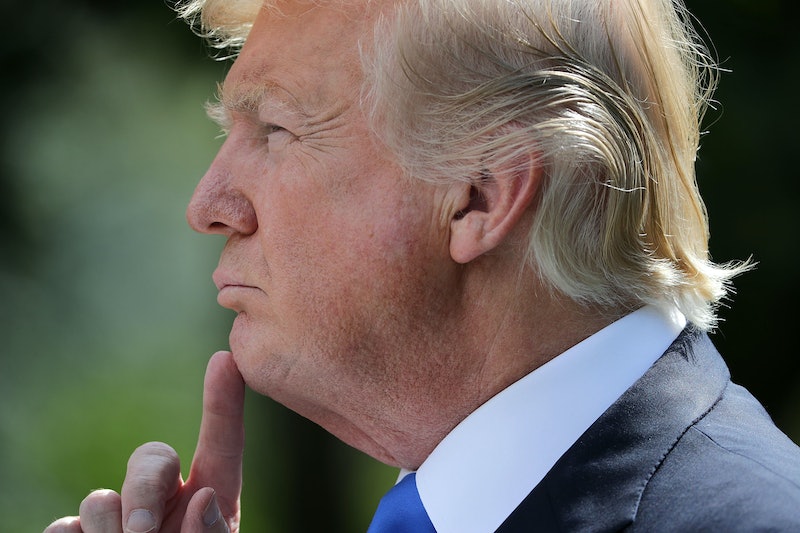 If you're into astrology, you've likely been keeping tabs on how the forthcoming eclipses, and all of the different retrogrades, can affect you. But, what does the solar eclipse mean for Donald Trump? Astrologists are predicting August could be a rocky month for the U.S. president who was born during a lunar eclipse, which potentially makes him more susceptible to the celestial power of eclipses.

The scariest part? Because Trump is arguably the least self-aware person on the planet, if he is affected by the lunar eclipse Aug. 7, and the solar eclipse Aug. 21, he may not stop to reflect on his behavior before taking action. But, you'll likely know what's happening right away from the constant updates on his message board, also known as Twitter.

“There’s been a lot of conversation about this eclipse in terms of what’s going on with Donald Trump,” Wade Caves, an astrological consultant who published a 29-page analysis of the coming eclipse, said in an article in Newsweek by Max Kutner. “The astrological world has been completely buzzing with this for quite some time, even more so since Donald Trump was inaugurated.”

Since solar eclipses are pretty common — they happen about every 18 months — you might be wondering what's so special about this solar eclipse. Newsweek reported that Aug. 21 is the first time since 1918 that conditions will align so that the shadow will cross the entire North American continent, in what is called the “path of totality,” which also kind of sounds like a description of Trump's leadership style.

How Will The Eclipse Affect Trump?

The coming solar eclipse is the first visible in North America since 1979. It occurs Aug. 21, 2017, at 28 degrees and 53 minutes of Leo. The eclipse will affect people born with personal planets and points at approximately 24 to 30 degrees of the fixed signs (Taurus, Leo, Scorpio, and Aquarius), and approximately zero to four degrees of the mutable signs (Gemini, Virgo, Sagittarius, and Pisces) most significantly, according to Cafe Astrology. Trump is a Gemini, which is a mutable sign known for making waves.

The astrologer known as Astrology King noted that several factors are coming together for the solar eclipse that could make this the perfect storm for the Trump administration, including that the eclipse falls near the brightest start of the Leo constellation, the fixed star Regulus. "The Heart of the Lion is one of the most important and most powerful stars in astrology. It brings success but danger of loss. The other main influence on solar eclipse new moon August 2017 is a helpful trine aspect to Uranus, the planet of change and excitement."

Astrology King explained that Regulus is "independent, proud, confident, frank, brave, militant, and violent. While open minded and generous, Regulus wants conquer and rule, to leave his mark before a successful challenger claims the throne."

This either sounds like a plot from Game of Thrones, or the current state of affairs at the White House.

"A solar eclipse with Regulus gives success, power, authority, influence, honor and wealth. However, envy and hatred from enemies can lead to trouble, violence, and downfall."

The celestial events that occurred when Trump was born will contribute to how the Aug. 21 solar eclipse will affect him, Astrology King noted. "Regulus and Mars were rising on the eastern horizon when Donald Trump was born. Therefore, solar eclipse Aug. 2017 should bring success due to his ambitious initiatives."

Astrology King also noted that Uranus will free up some of the limitations that have been placed on the Donald Trump presidency, which could allow implementation of some of his more unconventional policy proposals. This is not good news. But, what goes up must come down, and Caves told Newsweek, "a lot of astrologers are expecting some kind of downfall, some kind of ruin, some kind of difficulty.”

"Usually this series places strains on personal relationships, induces hasty decisions on the basis of false information [alternative facts, anyone?] and is associated with tiredness or health problems,” Orr explained on her website. “Certainly this eclipse presages violence in one form or another.”

Will The House Of Cards Collapse?

While 2017 has seemed like one long episode of House Of Cards, Cave noted that while the rest of the year could continue to be a dumpster fire, there is an end in sight, and that you should pay particular attention to what's going on politically from mid October until the end of December. And while you don't need to panic, it's always good to stay informed.

"[It's] possible that there will be a sudden health issue that lands on Trump’s shoulders, pulling him out of the Oval," Cave wrote in his analysis. "It’s also quite reasonable to suspect ousting, either through official channels (i.e. impeachment) or a mutiny behind closed doors. What we can say with reasonable assurance is that these charts, when properly considered, make it difficult to imagine Trump has smooth sailing ahead."

What's more is that Astrology Lynn Koiner noted that a solar eclipse can begin to affect you three-to-six months before the event and for up to one year afterward. The swell in Trump's unfavorable behavior in the past few months could be part of this lead up, and we may have to wait for as long as a year for all of the dust to settle. Until then, be sure to watch Twitter for updates.