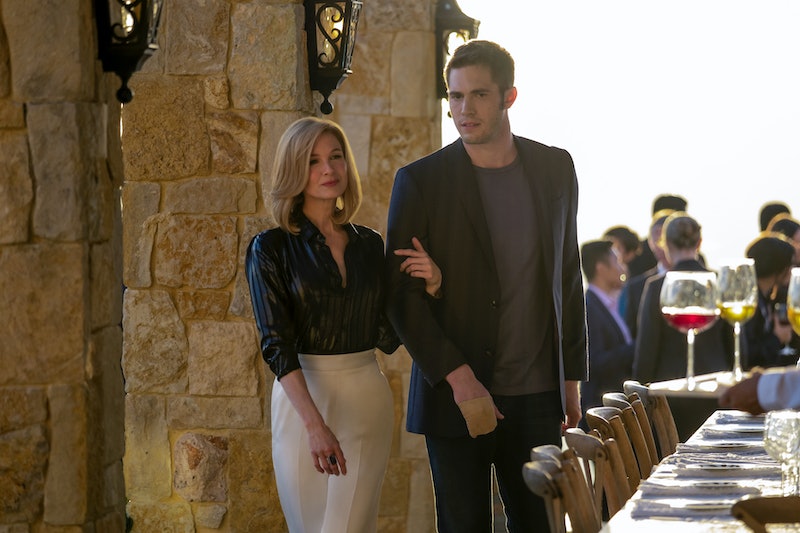 Spoilers ahead for What/If Season 1. There are a lot of secrets and lies to unpack in Netflix's What/If, but chief among them is what happened between Sean and Anne. In the first episode, Anne (Renée Zellweger), a powerful investor, propositions Sean (Blake Jenner) and his wife Lisa (Jane Levy): one night alone with Sean, and she'll write Lisa a multi-million dollar check for her med tech startup, Emigen, which is on the brink of bankruptcy. Afterward, Sean and Lisa aren't allowed to discuss the events of the night — if they break confidentiality, they're in breach of contract and Lisa loses her company. After some hesitation, they accept Anne's deal — but it's not until the end of the season that we finally learn what went down.

At first, all we know is that when Sean comes back from Anne's, his knuckles are bloody and he's visibly shaken. Even in total confidence, he refuses to tell Lisa what happened between him and Anne. There would be no coming back from it, he says. Naturally, Lisa suspects that Anne and Sean slept together, but all we see in flashbacks is Sean punching glass and Anne praising him for his "animal aggression." And in Episode 7, Anne confirms to Lisa that she didn't sleep with her husband that night.

Then, in Episode 8, Sean goes to the police to turn himself in for murder: as we gradually learn throughout the show's 10 episodes, a drug dealer tried to rape Sean's high school girlfriend, Maddie, many years ago, and Sean beat him to death with a baseball bat in a fit of rage. His best friend, Todd, helped him to cover up the crime, and they've been hiding it ever since.

But here's where things really take a turn. Anne knows this because she's been keeping track of Lisa her entire life, and when she married Sean, Anne looked into him too. Why? Because Anne is Lisa's mother: she gave her up for adoption when she was young, but continued to watch over her from afar. She feels Lisa is destined for greatness — but that Sean's been holding her back.

"[Anne] gave me a choice," Sean tells Lisa after Anne bails him out of jail, finally revealing what happened that fateful night. "Leave you right then and there, set you free to become what you've been able to become anyway, or defy her and let her prove that in the end I would only hurt you and lie to you and ruin you. That I was, and always will be, a monster." Just like that, the contract is breached and the truth is out.

Ultimately, what happened between Sean and Anne is much simpler than viewers may have imagined it to be. It's Anne's relationship to Lisa that comes as the biggest shock. That night is only one small piece of a much larger puzzle that Anne has been setting up for years — but in the end, Lisa beats her at her own game. Anne sells Emigen for $1.4 billion dollars, only to learn Lisa set it up so that the company is worthless: she leaks its technology to the public, voiding Emigen's value and making it seem as if Anne was swindling the buyers. So, she's forced to fake her death and skip town, leaving Lisa — finally out from under Anne's thumb — to run Emigen as a non-profit and rebuild her life with Sean.

More like this
Mike Flanagan Teases 'The Midnight Club' In This Exclusive, Creepy Clip
By Grace Wehniainen
Glenda Cleveland Died 2 Decades After Trying To Turn In Neighbor Jeffery Dahmer
By Brad Witter
Caleb McLaughlin Details Racism From 'Stranger Things' Fans
By Radhika Menon
What’s New On Netflix: Ana De Armas’ 'Blonde' & A Nick Kroll Special
By Arya Roshanian
Get Even More From Bustle — Sign Up For The Newsletter