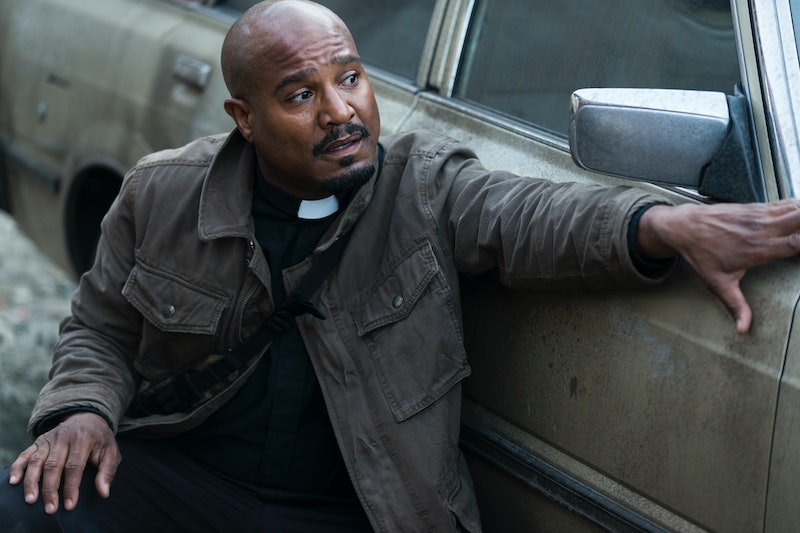 Maybe Father Gabriel feels bad for Gregory. Neither man is a fighter, and they have both made bad decisions in order to ensure their own survival. For a moment, it made sense that they two team up in the episode.

However, when Gabriel decides to go back for the former Hill Top leader, it is not surprising in the slightest that Gregory betrays him and leaves him behind, driving away in his truck. No amount of wishing for fictional characters to do better could have stopped that from happening. So, because he was trying to do a nice thing, Gabriel ends up not only left behind at the Sanctuary but in a very dire circumstance.

The good-ish Father seeks shelter from the oncoming hoard of walkers in a trailer. Who is in that trailer? A very ticked off Negan and Lucille the baseball bat. That doesn't sound like a particularly fun match, character-wise. Negan turned Rick Grimes into a blubbering mess. Imagine what he could do with the already skittish Gabriel.

Now we know where the "sh*tting pants" line from the trailer comes from, too. It's bad enough being surrounded by zombies, and utterly ridiculous that the always confident Negan takes this moment to threaten Gabriel.

In an interview with Entertainment Weekly, actor Seth Gilliam, who plays Father Gabriel, talked about this unlikely meeting of Negan and Gabriel. "I think it’s an interesting pairing of characters," he said. "We’ve got the far extremes. We’ve got the peaceful priest who’s fighting to be a fighter and the guy who’s just willing to bash people’s heads in on principle. So it’s a really interesting combination to stick Father Gabriel and Negan together in close quarters and see who can have an influence on whom."

As much as fans may have disliked Gabriel in the beginning, he has grown as a character. "Gabriel has found a little footing," Gillian said to EW, "finally, where he can be of service to the group. And I think it’s given him the purpose to live again. There was a point where Gabriel felt that there was no purpose in him to living. And he tried the suicide by walker, suicide by Sasha, and that didn’t work. But I think now he’s got purpose, so he’s more willing to do things because he feels that he’s being guided by God again. Whereas I think he lost God for a while, and now he’s hearing God again."

That said, will he make it through Season 8? He might die right then and there in the trailer by Negan's hand, or get sacrificed to the walkers so that Negan can escape back to his home. He could even become the next turncoat and betray Rick. Negan's influence, albeit evil, is pretty strong.

According to the official description for Season 8, Episode 2, "The plan involving Alexandrians, Kingdommers and Hilltoppers unfolds; as Rick continues to fight, he encounters a familiar face." The episode itself is titled "The Damned," which may refer to Gabriel's religious expertise.

No matter what happens on the show, take it easy on the actor. In the same Entertainment Weekly interview, Gillian talks about receiving death threats penned in response to the actions of his fictional character. "That had a profound impact on me," he said, "on just how seriously people are involved with the characters in the show."

Gabriel may live or die. He may do more good things or fall back on old habits. It's all a part of one great story.