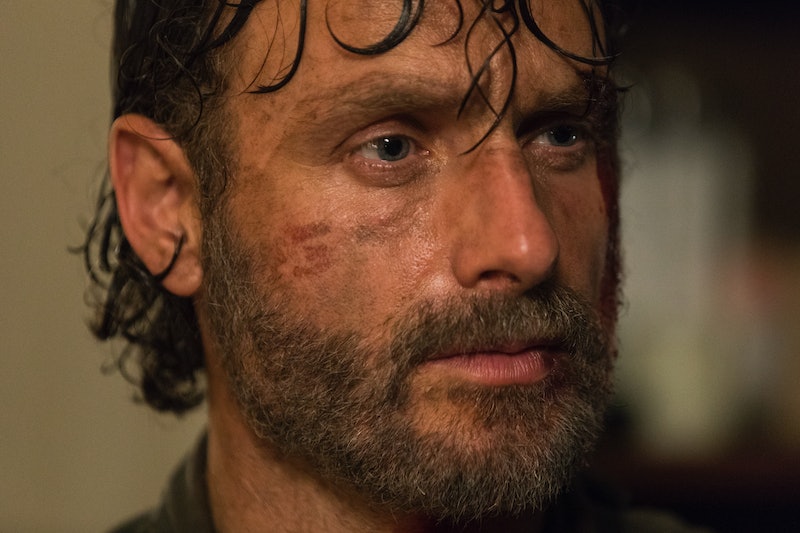 By virtue of being a show about zombies, it's not surprising for characters to "return," so to speak. They're dead, but folks don't often disappear and make it. However, The Walking Dead managed to pull off a pretty spectacular surprise in Season 8, Episode 1. Spoilers. In the middle of all out war, Morales returns on The Walking Dead and doesn't seem to be that keen on Rick Grimes.

"Your name is Morales," says Rick in the episode, possibly to help jog our memories a bit. "You were in Atlanta." Morales snaps back, saying, "That was a long time ago." Way harsh! Still, his appearance is a major throwback to Season 1. Morales and his family were part of the original group of survivors with Andrea, Merle, T-Dog, and Jacqui — remember Jacqui? She died at the Center for Disease Control, which is incidentally where Morales left the group. He and his family decided not to visit the CDC, and were allegedly headed towards Birmingham, Alabama. They wanted to find the rest of their family. Clearly they ultimately chose a different past.

What has he been up to? How did he make it this far North? Was he tracking Rick, like Morgan was at one point, or is this just a crazy apocalyptic coincidence? More importantly, are his wife and two children still alive? There's a picture of Miranda, Morales' wife, at the Savior outpost. That doesn't bode well, but it doesn't confirm anything either.

Since they ended up in the same part of the country, Rick and Morales have been on parallel journeys. Whatever turned Morales into a villain, if that is truly what he has become, remains to be seen. He doesn't immediately shoot Rick on sight — and considering the way the Saviors had just been massacred, that is something of a kindness.

In an interview with Entertainment Weekly, actor Juan Gabriel Pareja couldn't reveal much about Morales' to-be-revealed backstory, but never thought the character had perished.

"I had always assumed that Morales was surviving out there and making it work," he said, "always hoping for the best, definitely being a survivor. I think we saw that streak in him in the first season. Other than that, man, I just figured he was out there surviving and doing probably some really nasty things in order to survive. I’m kind of naive and optimistic that he was still being a family man, and taking care of his family, and surviving out there in the awful world of The Walking Dead."

Now, at the end of the latest episode, Morales holds Rick at gunpoint. He also radios the Saviors and says they're coming for Rick. Is he himself a Savior? He's definitely working with Negan in some form or fashion. Maybe Rick should have taken that baby, to be honest.

It's also bizarre that Morales opinion of Rick Grimes seems to have soured so much in the interim. When the Morales family left, Rick gave them weapons and ammunition, as well as a walkie talkie in case they wanted to return to the group. He couldn't have been more courteous and respectful. Morales and his family were friends with Carol and Daryl and all the other original survivors, too. They've all changed. Hopefully they all get to catch up in a less hostile situation.

Sure, Morales and Negan share a weapon of choice, but he can't be that bad. Right? This all goes to show that the world of The Walking Dead is pretty small — and that Negan's reach is pretty wide. The reappearance of Morales is going to be an interesting test of loyalty, should he really betray his former ally. It is also a good perspective to have in a war this brutal. Sometimes otherwise good people, or old friends, end up on the wrong side. Whatever happened to Morales informs not only that, but what happens next on The Walking Dead.