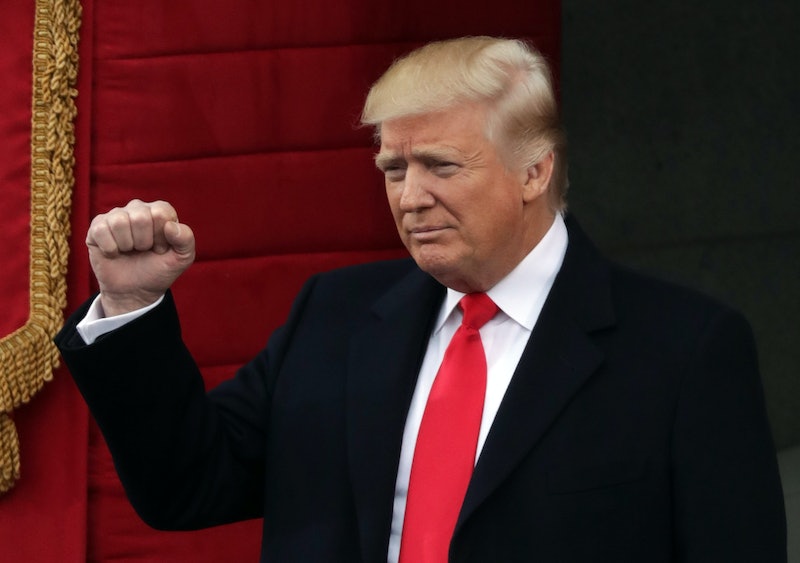 There's been a lot of talk in the coverage of the inauguration about Donald Trump needing to be sworn in as President by noon, so what's going to happen now that he technically wasn't? Trump finished the Oath of Office at noon on Jan. 20, which is technically after the deadline for the transfer of power as set in the United States Constitution. So what now? As far as I know, there is no precedent for a president-elect missing the deadline, or language in the Constitution as far as consequences if one does. Basically, just seconds into Trump's presidency, we're already flying blind. How wonderful.

Many of the traditions attendant to an inauguration are just that — traditional — and not actually written into law. But one exception to that rule is a requirement that the president-elect be sworn in as the president by "noon on the 20th day of January," which is written right into the 20th Amendment. Said amendment states that the former president, in this case, Barack Obama, holds power until 11:59:59 on Jan. 20, and, at the stroke of noon, the power shifts to the new president.

In the hours and minutes leading up to the inauguration, reporters in kept alluding to the fact that Trump was running behind, and underlining the noon deadline. On a day when everything else could be dictated by the incoming administration, noon was the only thing written in stone, a hard and fast deadline. And as the clock ticked past 11:50 a.m. ET, and Mike Pence was only just being sworn in as Vice President, I began to get genuinely concerned that the deadline might be missed and curious about what would happen if he did.

Trump's candidacy and election have already been plagued by controversy, losing the popular vote to Hillary Clinton as he did by 2.8 million votes, so I felt sure that his team would want to steer clear of even the whisper of illegitimacy. As the minutes passed, I could feel an increased urgency among the festivities in Washington, D.C., and Trump began to take the Oath of Office at 11:59 a.m. on Jan. 20. So he made it, right?

Well, yes and no. I was watching the clock as Trump was being sworn in, and it ticked over to noon before he had finished the Oath. While I presume it still counts, and the legitimacy of the inauguration won't be questioned, our 45th President cut it prettttty prettttty close. He was effectively late for his literal first appointment as president, which feels like a more apt metaphor for his time in office than I ever could have invented on my own.