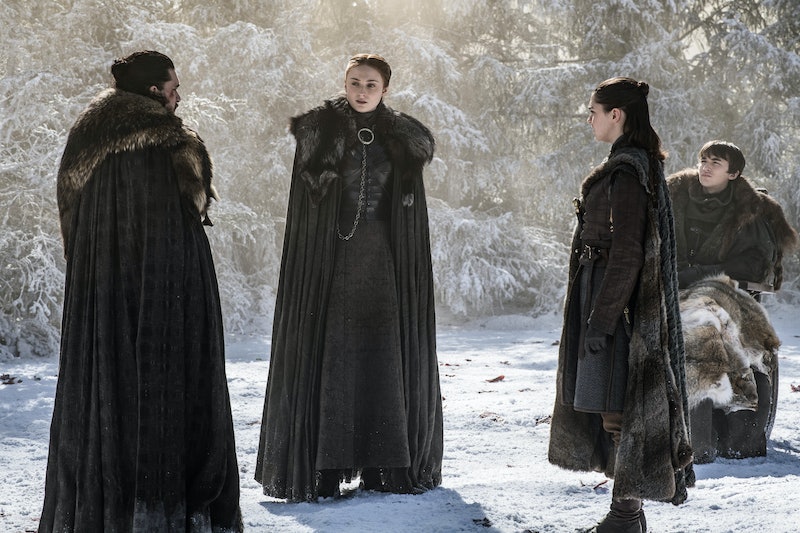 Game of Thrones is coming to a fast close, but there are still two books in George R. R. Martin's series that have yet to be completed and published. What happens to Sansa in the GoT books, then, is still literally unwritten. But her fate may be headed in a different direction from what's happening in the show.

Many of Sansa's strengths in the books are the same in the HBO series. Her time observing in King's Landing, with friends as well as while under duress, has made her good at diplomacy. Her love of lemon cakes comes directly from the books, too, as well as her shrewdness — and the way that everyone wants to use her as a marital pawn. Sansa is also a survivor of assault and attempted rape in the books, but her marital rape and torture at the hands of Ramsay Bolton is the biggest (and most disappointing) change the TV show made.

In the books, Sansa is still at the Eerie, disguised as Lord Baelish's bastard daughter and calling herself Alayne Stone. After Littlefinger pushes Lysa Arryn out of the moon door, they stay there and frame someone else for her death. Sansa actually becomes the Lady of the Eerie, as the sickly Robyn Arryn is not exactly fit to rule.

Littlefinger's plan is to gather the Lords of the Vale before revealing Sansa's true identity, and then have them take over Winterfell — which is still, at this point in the books, being ruled by Ramsay. There's also a new person that the Powers That Be (read: Littlefinger) are trying to marry Sansa off to for political gain. Sansa meets him in an unreleased chapter from The Winds of Winter. His name is Harrold Hardyng, aka Harry, and he's kind of a snack. However, Sansa is by now suspicious of handsome men, and the fact that Harry is rude to her while she's disguised as "Alayne Stone" does not earn him any points. She's also, like, kind of hung up on the Hound in the books... which is a whole thing.

When, how, and if Sansa's journey will lead her to reclaim Winterfell (something that, in the books, Jon Snow is heavily in favor of) and reunite with her siblings remains to be seen. Sansa seems likely to be alive at the end of the HBO series, but she may not make it in the books, as she isn't one of the five characters that George R. R. Martin said survived in his original pitch for the books.

Even if Martin's big plan has been to land Littlefinger on the Iron Throne, hopefully Sansa will eventually break away from him, maybe still kill him, and maybe even try to negotiate a marriage for herself on her own terms one day, if she so pleases. Whether or not she becomes the Lady of Winterfell, or better yet the Queen in the North, it's going to be interesting to see how the books handle her future now that the show is ending.

More like this
Nicola Coughlan Shared A Lady Whistledown Excerpt From ‘Bridgerton’ Season 3
By Grace Wehniainen, Alyssa Lapid and Sam Ramsden
This Episode 6 Moment Foreshadows Viserys' Fate On 'House Of The Dragon'
By Grace Wehniainen
Alicent's Green Dress In 'House Of The Dragon' May Be An Act Of War
By Kadin Burnett
'House of The Dragon' Episode 6 Will Take Place A Decade After Episode 5
By Kadin Burnett
Get Even More From Bustle — Sign Up For The Newsletter