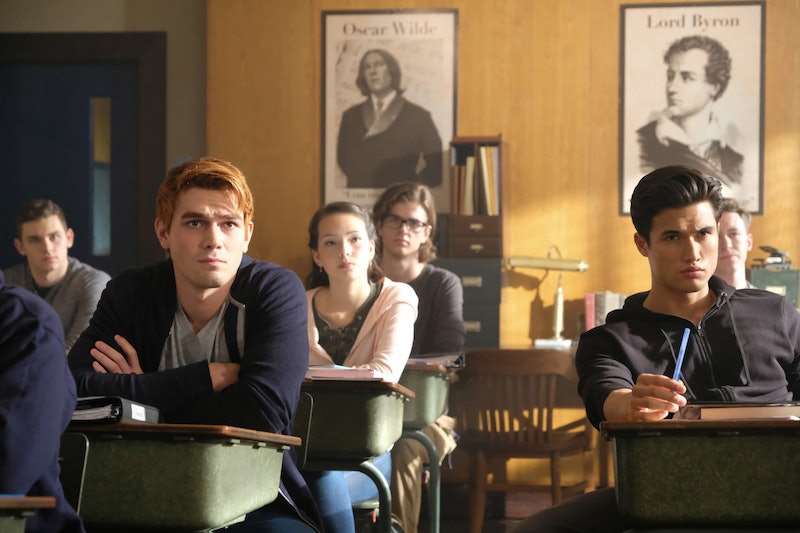 Riverdale is darker in Season 2. Crime is on the rise in the quiet hamlet. Not only is there certainly a serial killer on the loose, but substance abuse is running rampant as well. What is "jingle jangle" on Riverdale? The Black Hood shoots two teenagers who were presumably using the drug at the end of Wednesday Oct. 18th's episode. Sheriff Keller alluded to the drug's use being on the rise in the Season 2 premiere, and that was all too apparent in Wednesday's new episode.

First of all, what kind of drug is it? Early in the episode, Midge is looking to score some from New Reggie. (The role was recast for Season 2, when Ross Butler's 13 Reasons Why schedule conflicted with the CW series. Reggie is now played by Charles Melton.) Then, Archie asks about it. Reggie's description of the stimulant is that "it'll keep you up for days... in more ways than one." Kinky, but mysterious. Also, it's packaged in Pixy Stix? Only Riverdale would disguise an illegal drug in a retro candy favored by Toddlers in Tiaras contestants and Allison from The Breakfast Club.

Archie at least has a noble reason for partaking. He wants a little help staying awake while guarding his father. This may not be a healthy decision, but his instincts are spot on. The person who attacked his father did kill Miss Grundy. The fact that he then goes after some jingle jangling teenagers is what doesn't add up.

Second of all, why is it called jingle jangle? The name probably has nothing to do with Bob Dylan's "Mr. Tambourine Man," or the song "Turkey Lurkey Time" from Promises, Promises, but one does wonder what the origin of this drug's cheerful name is. A likely answer is a different song, actually called "Jingle Jangle," and released by The Archies in 1969. There aren't really any clues in the lyrics — it's a pretty generic pop song from the period. Fingers crossed that we get a Josie and the Pussycats cover of this gem before Season 2 is over.

New Reggie then delivers the uppers to Archie in a decidedly weird way. As a prank, he dresses up like the Black Hood and tried to sneak up on the traumatized younger Andrews — then seemed surprised when he got jumped. Reggie has become an agent of chaos in more ways than one.

Towards the end of the episode, Betty's mom observes some more deals going down outside of the now Lodge owned and operated Pop's Diner and put the blame for single-handedly soiling the reputation of the town on her own daughter. Seems like a stretch, but something is up with this jingle jangle business.

Maybe jingle jangle's rise in Riverdale is connected to this mysterious killer. Maybe it's going to start that zombie apocalypse that everyone thinks is coming to the Riverdale and Spooky Sabrina connected universe. Weird drugs have started an undead epidemic in more than one fictional universe.

Archie also bought an illegal gun from Dilton Doiley at the end of the episode — can we talk about that? He does end up going to sleep, finally, but this is a dark turn indeed. Archie's dance with death has really done a number on him.

Still, this mysterious drug is clearly going to be a major player in Season 2. It's the only feasible reason why Midge and her date Moose were attacked — unless they have some Serpantine, Lodge, or Blossom connection that has yet to be revealed. Sidebar, aren't Moose and Reggie pals? Why did Midge have to go to Reggie herself? None of the clues about jingle jangle or the murderer are adding up on Riverdale, which makes this season's mystery all the more tantalizing.