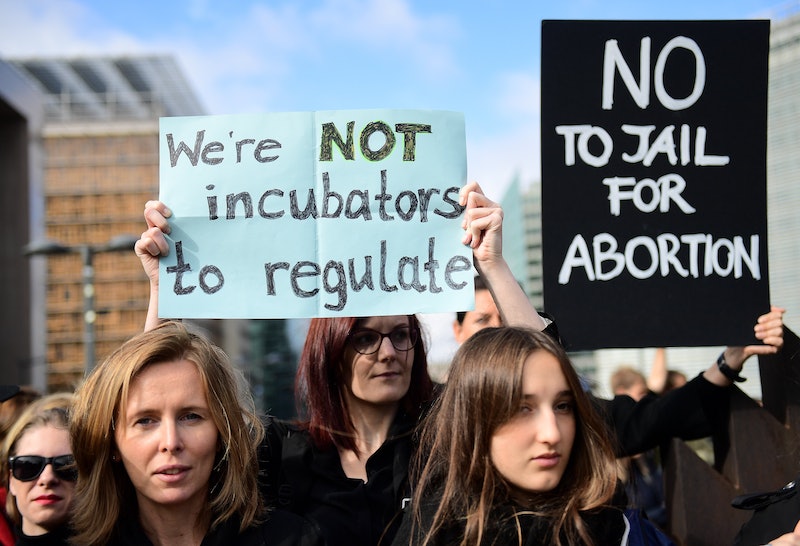 Amidst executive orders and presidential memoranda concerning everything from Obamacare to oil pipelines — and just days after Women's Marches took place in cities around the world — congressional Republicans introduced a "personhood" bill to further criminalize abortion. HR 586 is a bill sponsored by Georgia Rep. Jody Hice and roughly 20 other House Republicans that would define human life as beginning at fertilization.

Hice, a Republican, argued on his website that this personhood bill would "end the plight of abortion on our nation." Moreover, Hice clarified that his definition of human life as beginning at conception is without exceptions, which means he would not approve of exemptions based on the pregnant person's health and safety, or in cases of rape and incest.

This is not the first time such a bill has been introduced. Similar bills in the past includes the Life at Conception Act, proposed in the Senate back in 2013, and the Sanctity of Human Life Act, which was proposed in the House that same year. (Another bill called the Sanctity of Life Act, similar in both name and purpose, has been proposed multiple times in Congress as early as 1995.) Such legislation has routinely failed to pass, but it seems Republicans are ready to try again now that both houses of Congress contain a Republican majority and Donald Trump is president.

By defining human life as beginning at conception, anti-choice advocates attempt to classify fertilized eggs, zygotes, embryos, and fetuses as people with rights — including the right to life as granted by the U.S. Constitution. Hice hopes that this legislation will serve as a way to challenge Roe v. Wade, which legalized abortion up until viability (that is, until the fetus would be able to survive outside the womb).

It is therefore clear beyond a doubt that Hice is more concerned about the "life of the unborn" — a fetus that could not survive outside the womb for at least the first 20 weeks of pregnancy, if not more — than he is about the life of a person who is pregnant.

But abortion is not all that would be affected by a personhood bill. If HR 586 were to pass, it could also effectively ban in vitro fertilization in the U.S. Why? Well, if personhood legislation classifies an embryo as a person, the transfer process for embryos would potentially be breaking the law, because some embryos are discarded. This could be seen as endangering a person, even though it is not.

Finally, HR 586 could also ban numerous forms of contraception and negatively affect health care for pregnant people. Although this personhood bill is fairly unpopular on Capitol Hill, we should not underestimate congressional Republicans and other anti-choice advocates. This bill may very well pass unless we actively mobilize to preserve access to safe and affordable reproductive health care.