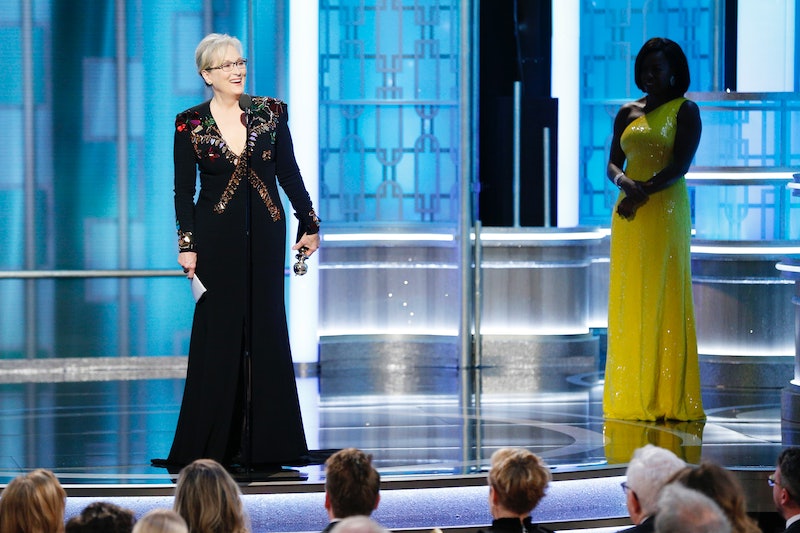 The Golden Globes were held Sunday night, and as with most Hollywood award ceremonies, there were beautiful people in beautiful gowns and star-studded musical numbers aplenty. But the Golden Globes delivered an unexpected moment when Meryl Streep took the stage and showed us all how to raise your voice in the face of injustice.

Meryl Streep was honored with the Cecil B. DeMille award, which was given in recognition of her lifetime of work in the industry. She could have made a quick and gracious thank-you speech and exited the stage. She didn't. She took her allotted time, and then some, to talk not about her career or the award she held in her hands, but about her fears for the future of our country. Streep zeroed in on the things she was surprised and heartbroken to see transpire this past year — specifically, Donald Trump's mocking of a disabled New York Times reporter at a rally in November 2015.

"There was one performance that stunned me. It sank its hooks in my heart. Not because it was good. There was nothing good about it. But it was effective and did it's job," Streep said of Trump's mocking imitation of the reporter.

She went on to talk about what has scared me the most about this election: that regardless of whether or not Trump believes in what he has been saying, his actions have emboldened the people who do subscribe to the beliefs and rhetoric he has touted:

This instinct to humiliate when it's modeled by someone in the public platform, by someone powerful, it filters down into everybody's life, because it kind of gives permission for other people to do the same thing. Disrespect invites disrespect. Violence incites violence. When the powerful use their position to bully others, we all lose.

While most of us do not have the clout or audience that Streep does, last night she set the example for how all of us who believe in maintaining a respectful and inclusive society need to act going forward. Trump's behavior on the campaign trail and as president-elect normalizes bigotry and discrimination. And as Streep said, when that permission comes from the most powerful people in our country, it becomes harder to convince people that Trump's racist rhetoric and trademark bullying tactics are wrong.

So it is our job to prevent that normalization. To put a stop to the trickle-down Trumpism. And to achieve that, we need to follow Streep's lead and boldly speak out against injustices when we see them. Because turning a blind eye ensures that hate will win.