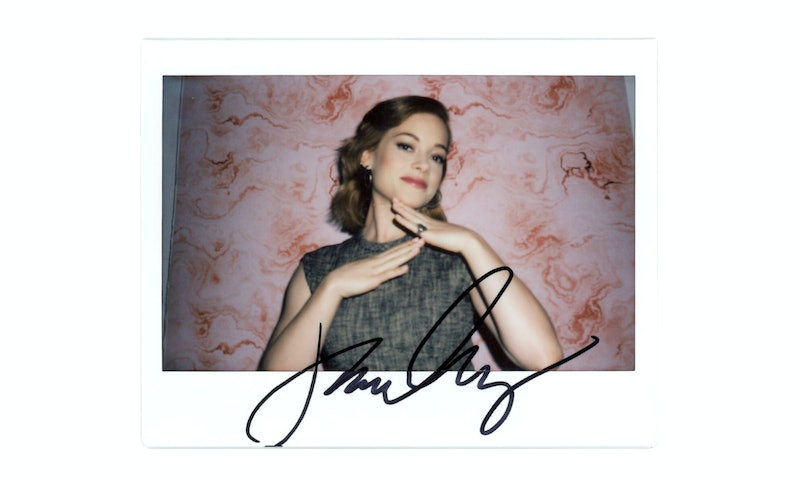 When celebrities hang out with Bustle writers, we want to give them the chance to leave their mark. Literally. So we hand them a pen, a piece of paper, a few questions, and ask them to get creative. The rest is up to them. This time, actor Jane Levy from What/If is leaving her mark in the Bustle Booth.

Jane Levy knows that her name is synonymous with spooky stories. As the star of horror hits like Evil Dead, Don't Breathe, and Castle Rock, even Levy's own mother has noticed a trend in the projects she picks. "My mom is like, 'OK, is this a scary one?'" she admits.

This time, though, the answer is no. But even if you're not watching Levy's juicy new Netflix series What/If through laced fingers, you'll still be shocked by what goes down on the show. While getting the rundown of the psychological thriller's twists and turns from series creator Mike Kelly, there was a moment when Levy says she "audibly gasped" at the revelations.

Chances are, when you watch What/If, you will, too. The steamy, suspenseful series stars Levy, Reneé Zellweger, and Blake Jenner in a present-day spin on the 1993 neo-noir film Indecent Proposal. The series gender-flips that film's roles, with Zellweger's high-powered businesswoman offering Levy's character the money she needs to save her business in exchange for a night alone with her husband, played by Jenner. It's a refreshing reverse of the film that allows both Zellweger and Levy to take on more complex roles, while Jenner's character becomes the object of affection at the center.

"I think this show actually does explicitly sort of objectify the male characters in a way," Levy muses. "That is not necessarily, I think, the goal in giving women a bigger platform, or giving women better meatier roles. But I think in the style of this melodrama, it works — and we have such a handsome lead in Blake Jenner and the show sort of like explains his sexiness in a way that often happens to female characters."

It's also just cool to see two powerful women absorbed in their work lives without it being considered a bad thing. "My character's whole goal in the series — beyond holding onto this relationship [with her husband] — is to build her company and save lives and be a successful CEO," Levy says. "Renée's character is there sort of as this like evil guide telling her how is she can achieve those things."

The paranoia that results from these secrets and lies is also different viewed through the lens of a female protagonist. Nobody wants to be the "crazy wife" who's checking her husband's GPS, and Levy's character is aware of that stereotype even as the stakes are raised. The emotional labor that women perform for themselves and for others factors in to how she reacts to this increasingly twisted situation. "She is emotionally and quite literally trying to hold together her family and her workplace," says Levy. "I think that that is common for women."

Ready to dig in to this dishy drama? Before you do, check out Levy's answers to our Bustle Booth questionnaire below.

More like this
'Grey's Anatomy's New Intern Got Advice From Dr. Bailey Herself
By Grace Wehniainen
'Firefly Lane' Season 2 Will Be The Show's Last — But There's A Twist
By K.W. Colyard and Grace Wehniainen
Martin Compston’s New Drama Looks A World Away From 'Line Of Duty'
By Frances Stewart and Sophie McEvoy
The 'Heartstopper' Cast Were Spotted Filming In A Major City
By Nola Ojomu and Sam Ramsden
Get Even More From Bustle — Sign Up For The Newsletter