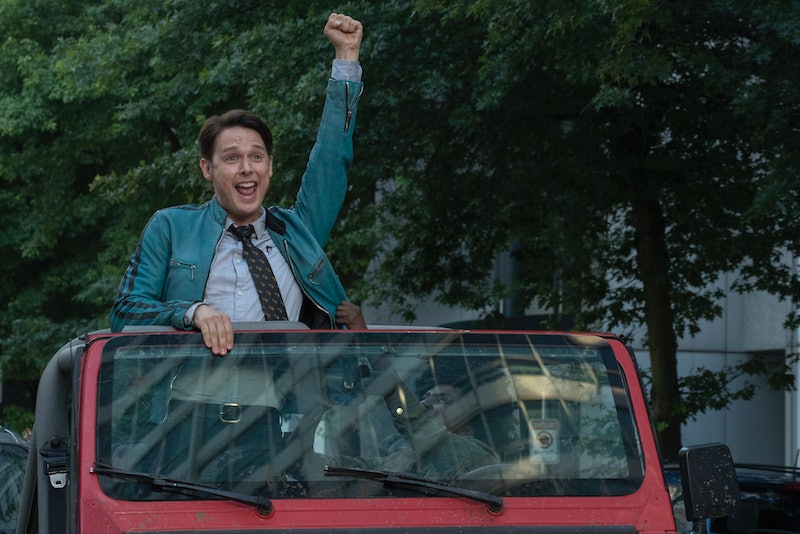 Most science fiction fans have likely geeked out on The Hitchiker's Guide To The Galaxy at some point in their life, but another one of Douglas Adams' properties has been recently gracing the small screen. Dirk Gently's Holistic Detective Agency returns to BBC America Saturday, Oct. 14 for Season 2. For those looking to dive in — what is a holistic detective, actually?

The description in the original 1987 Adams novel is as follows: “The term `holistic' refers to my conviction that what we are concerned with here is the fundamental interconnectedness of all things. I do not concern myself with such petty things as fingerprint powder, telltale pieces of pocket fluff and inane footprints. I see the solution to each problem as being detectable in the pattern and web of the whole. The connections between causes and effects are often much more subtle and complex than we with our rough and ready understanding of the physical world might naturally suppose."

Does that help to clear things up a bit? He's definitely a private detective, that's for sure. A "holistic" detective doesn't look for clues, they look for the big picture. He's interested in the universe's intentions and how it can reveal the answer to the mystery at hand.

To pull out the dictionary for a moment, the Mirriam-Webster definition of the term holistic is "relating to or concerned with wholes or with complete systems rather than with the analysis of, treatment of, or dissection into parts." The term comes from the theory of holism, which posits that whole beings are more than the sum of their parts.

Holistic medicine, of course, is healing that focuses on wellness though the whole person — not only your physical body but also your mind, spirit, soul, and emotional wellness as well. Holistic nutrition focuses on healthy habits for the whole body, and holistic ecology views humans and their environment as part of an interconnected ecosystem.

What Douglas Adams has done, in a humorous way, is apply this theory to detective work. It's a bizarrely abstract concept, kind of like the existential detectives played by Lily Tomlin and Dustin Hoffman in I Heart Huckabees. There's no such thing as a holistic detective in real life — even though Dirk Gently might have you believing in the method.

In an interview with IndieWire, showrunner Robert C. Cooper elaborated on what being a holistic detective means in this fictional world. “It’s really just the idea that the universe has a plan," Cooper said, "or that there is an order to the universe and that something you do today may affect you down the line. Or something somebody else does on the other side of the world can affect you. It’s just the idea that somehow coincidences maybe aren’t such coincidences and that the connections between events and things that happen to you may not be quite so obvious to you. That’s one of Dirk’s special magic powers in fact is to be able to see how things connect to each other in unexpected ways.”

In an interview with Entertainment Weekly, actor Samuel Barnett, who plays Dirk in the BBC America adaptation, alluded to his character's more supernatural elements on the show. "He’s sort of psychic," he said, "but not. His powers don’t really help him. He’s no good at interpreting any of these messages that he receives. He’s trying to use these so-called powers for good, but keeps on getting himself in a complete state. So, he needs people around him. It’s why he needs a detective agency. For me, he’s the antithesis of Sherlock. Sherlock is all intellect, and brain, and has his mind palace. And Dirk’s got his emotional neuroses cottage."

How does that actually translate to solving crimes? You'll have to watch the show to find out. People often say that everything is connected, but nobody believes that more than Dirk Gently.