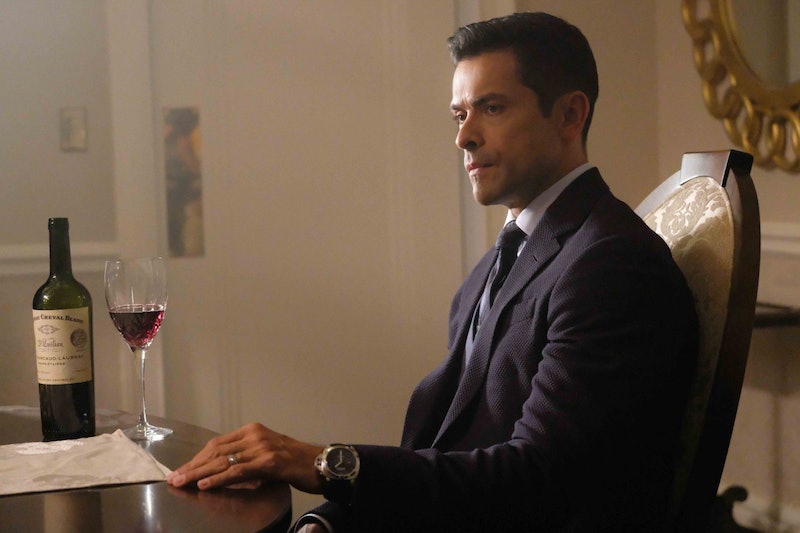 Even before he arrived on Riverdale, Veronica's father was pulling strings and causing chaos. Now that he's here, his motives are foggier than Eversgreen Forest. What's going on with Hiram on Riverdale? Why is he so invested in the Red Circle? The family man is up to no good.

Early on in the Wednesday Oct. 25 episode, Hiram swoops in on Veronica's "Matchelorette" viewing party and encourages Archie to take the town's protection into his own hands. He invites Archie over to a future family dinner and says he looks forward to seeing what Archie comes up with to "save Riverdale" — suspicious, as the Black Hood is purportedly going after sinners in town. Are they connected? Hiram's involvement with the Southside Serpents definitely doesn't make "saving Riverdale" seem like a sincere wish, either. Maybe he's involved with both the heroes and the villains here, and is playing them off one another to create chaos.

Later, Archie starts a gang — sorry, teenage neighborhood watch — and at that dinner with Veronica's family, Hiram offers him some advice. Archie wanted the Red Circle to be a passive patrol that kept everyone safe without weapons. Veronica's father, however, suggests a change in tactic. "Evil, Archie, has no regard for nobility or good intentions," Hiram says. "Sometimes defending yourself? It's not enough." He encourages them to strike back against the Black Hood, and be more offensive than defensive. He may even be funding their efforts at this point. This is very strange behavior coming from an adult man; not that any of the grown-ups on Riverdale are the picture of maturity.

In an interview with Digital Spy, Veronica actor Camilla Mendes discussed the character's motives and dynamic with her own character on Riverdale. "Hiram arrives and Veronica can't really trust him," she said, "considering she knows what he's done and he's trying, he actually is trying to step into her life again and play more of an active role as her father but at first she's very hesitant, but that changes. That being said, Hiram is still the shark he's always been, he's still a businessman, that hasn't changed, and he's keeping a lot of secrets from Veronica and she wants nothing more than to be part of that secret, and he won't let her be."

Hiram is definitely not a model citizen. That goes without saying even if he wasn't recently released from jail. He's corrupting Archie and encouraging a darkness inside him, no matter what his motives are. Hiram threatens Hermione later on in the episode, and it's unclear just how equal their partnership is. He lied about buying Pop's Diner. In general, he seems to have eyes and ears everywhere in Riverdale. There doesn't seem to be a corner of this town that Hiram Lodge's hands aren't in. He's probably going to start handing out duet suggestions for the kids next.

Meanwhile, Polly is headed out of town to seek refuge from the killer at a farm outside of Greendale, and in the modern after-school special corner of Riverdale, Betty learns a valuable lesson about slut-shaming from Kevin. Jughead also finds out that Jingle Jangle, or "JJ" as Toni calls it, is coming from a rival group at Southside High called the Ghoulies. This new faction is likely inspired by the Sabrina The Teenage Witch spin-off Groovy Goolies. The gang is gathering clues, and the secrets will out before long.

Whatever Hiram is up to, Veronica is on the case as well. Her request to be "in the room where it happens" (slick Hamilton reference, V) at Lodge Industries means she'll be keeping an eye on Daddy dearest. Do you also get the sense that Hermione Lodge is jealous of her own daughter? The family dynamics are all over the place on Riverdale but the dastardly deeds are far are important than those. Hiram is doing something shady through these teens. We just don't know what.