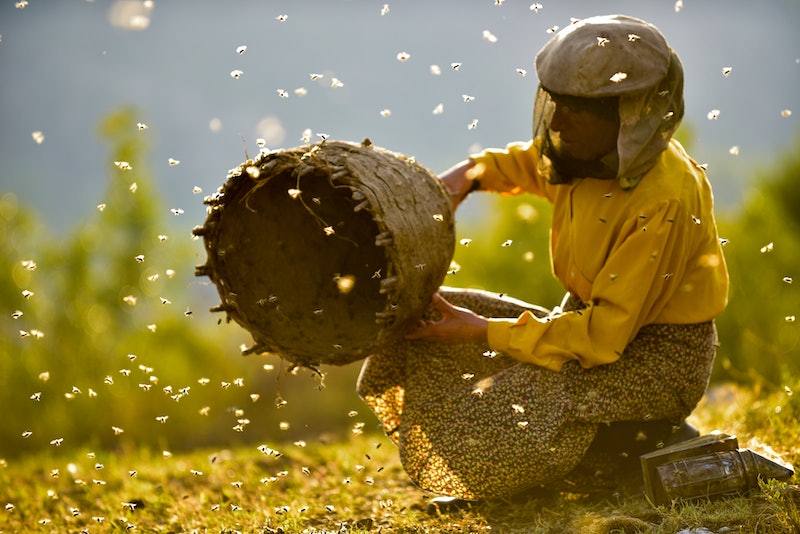 Some of this year's Oscar nominees already seem like sure winners. Renée Zellweger and Joaquin Phoenix probably have the lead acting categories locked down. And it's likely that 1917 will take home Best Picture, swiping the prize from the much-beloved South Korean thriller Parasite. But things aren't so predictable in other categories however, particularly in the category for Best Documentary Feature. The Barack and Michelle Obama-produced American Factory is surely a favorite. But another contender, one with stunningly gorgeous cinematography and a timely environmental message might also take Best Doc. Honeyland, a Macedonian documentary about beekeeping, stormed the 2019 Sundance Film Festival, taking home multiple awards. But that was a year ago. Where can you stream Honeyland now?

Honeyland is available to stream on Hulu or Apple TV if you have a subscription to those services. You can also rent the doc on Amazon, iTunes, and Vudu. Directed by Tamara Kotevska and Ljubo Stefanov, Honeyland was filmed over the course of three years, with the documentarians acquiring over 400 hours of footage. Shot with the backdrop of the dwindling bee population, looming climate change, and the demands of worldwide consumerism, Honeyland screams with environmental urgency while telling a smaller story of mother and daughter.

Honeyland follows the life of a woman named Hatidze Muratova, the last in a long line of ancient Macedonian bee keepers. She walks four hours to the closest town to sell her honey, which she harvests by keeping sacred rules of sustainability: take only half, leave the other half for the bees. She shares a small house with her blind and immobile mother, taking care of her every need in a kind of queen bee worker bee relationship.

Muratova's way of life is threatened when Hussein Sam, a Turkish nomad, and his family of seven children and multiple farm animals, arrive to start a bee colony of their own. Muratova befriends the family and offers her extensive expertise to help Sam get started, but her advice is quickly cast aside. Eventually, the new colony attacks Muratova's, and the whole operation is thrown into jeopardy.

"The point is to take as much as you need, not to take everything," Stefanov told Deadline about the message of the film. Though Kotevska insists that the Sam family "are not villains. They're 10 people in a deserted place and they must survive...each of us who every day makes a choice what to buy from the store, what to eat. We're all faced between the moral values and the pressures of society."

In addition to its stunning cinematography and compelling story, Honeyland is also making history at this year's Academy Awards. According to PBS News Hour, Honeyland is the first film to be nominated in both the Best Documentary Feature and Best International Film categories, earning a spot in a category often reserved for narrative films. (The latter is the revamped version of Best Foreign Language Film.)

Muratova herself is also heading to the Oscars ceremony, a trip bound to create an intensely overwhelming culture clash. But Kotevska thinks her presence is important. Continuing with Deadline, Kotevska says Muratova will "remind us of who we really are and not to forget where we will come back to. It's sometimes very difficult in all of this craziness that’s happening now…to remind yourself where you started from."