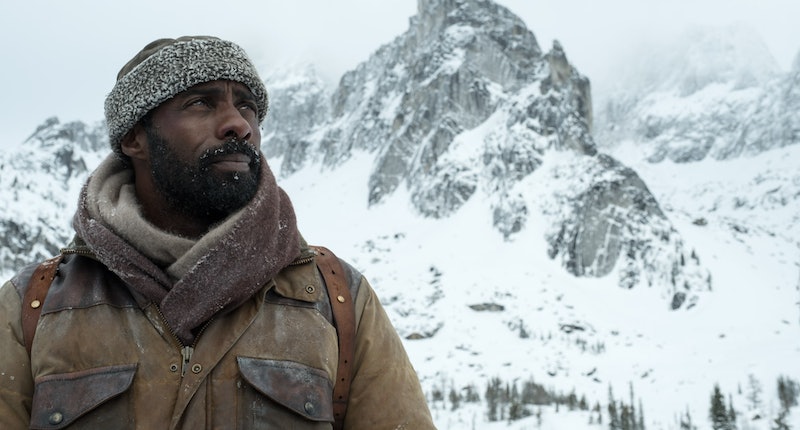 Idris Elba and Kate Winslet are, objectively, two of the most beautiful people ever committed to film. So when the two of them joined forces to star in The Mountain Between Us, there was only one thing to do: set the movie in one of the most beautiful locations possible — but also one of the scariest. Where The Mountain Between Us was filmed may be gorgeous, but it's also totally, utterly, terrifying.

Out Oct. 6, The Mountain Between Us is an epic survival movie about two strangers, Ben Bass (Elba) and Alex Martin (Winslet), who are stranded at the top of a snowy, Utah mountain after a plane crash. With no rescue on the way and only each other to depend on, they decide to tackle the mountains in an attempt to make their way to safety. In the world of CGI and green screens, it would have been easy for director Hany Abu-Assad to film the entire movie in a nice, warm studio. Instead, he took the production all the way to the real mountaintops of the Purcell Mountains in British Columbia. The Mountain Between Us was filmed at altitudes as high as 11,000 feet, in snow-covered locations and often in freezing temperatures.

"Hany wanted everything to be as realistic as possible. And the actors were so amazing," cinematographer Mandy Walker told the Los Angeles Times. "We really went to those locations and went up to between 10,000 and 11,000 feet, we got up in a helicopter, and it got down to -40 [degrees Celsius] sometimes." The tough shooting conditions and perilous temperatures made filming extremely difficult, especially because Abu-Assad wanted the film to be as epic and beautiful as possible. Wide tracking and landscape shots, for example, required equipment not easily assembled in four feet of snow. "The extra challenge was that Hany wanted the camera to be elegant and epic, with a crane on top of the mountain, and moving with the characters as they work their way down," Walker said, via Indiewire. Just building the crane and infrastructure needed to get the shot took three days. Freezing temperatures also meant added technical concerns when the cameras weren't rolling to keep the equipment from freezing.

Technical concerns aside, the rough terrain and freezing cold wasn't easy for the actors either. "The hardest thing up here has been overcoming one's own fear," Winslet said in a behind-the-scenes featurette. The actor had a particularly difficult stunt to pull off when her character falls through thin ice and into the deadly ice waters below, something she insisted on doing herself. "I did Titanic, dude! Falling through the ice — no problem! Plane crash, boat sinks — no biggie!" Winslet told People. Winslet might have been the one falling into the water, but co-star, Elba, didn't get off easy. That same stunt required him to pull her out of the water — a complete dead weight that required all of Elba's strength to hoist above the ice. "It was a real struggle in the scene, in the movie you see it — like, I'm really struggling," Elba revealed in an interview with People. The actor also admitted that he was the bigger baby on set, saying, "I don't do the cold!"

Winslet's water stunt will undoubtedly make some fans think of her other famous water role, Titanic. In fact, she told People that filming The Mountain Between Us often reminded her of shooting Titanic. "You know, I did a film about a boat that crashes into an iceberg, and so it's kind of my thing," she told Jimmy Fallon on The Tonight Show. As long as her characters keep surviving, fans should be more than happy to continue to watch her battle the tides on screen.