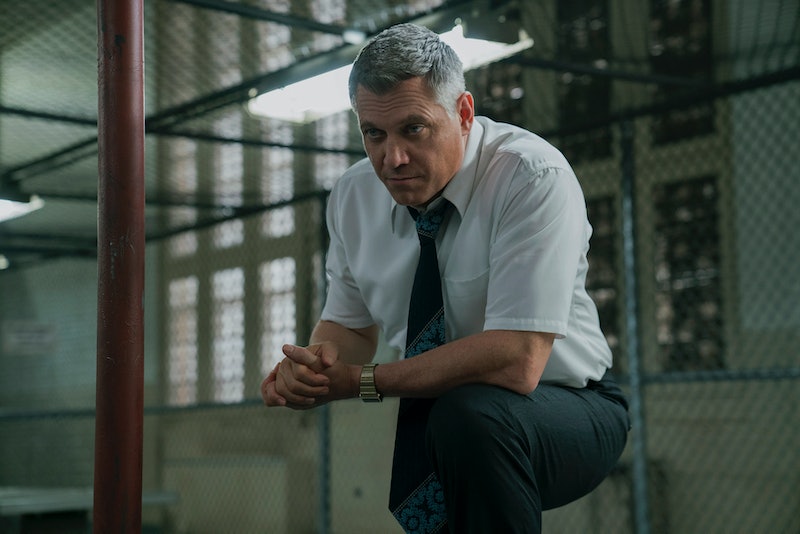 If you've ever wondered what it might be like to talk to a serial killer, look no further than the new Netflix show Mindhunter. The show follows the protagonist Holden Ford, an FBI agent working in the 1970s who begins interviewing serial killers in order to develop a better behavioral profile of their traits and habits. Yet Ford doesn't work alone. Who is Bill Tench from Mindhunter, and what role does he play in the psychoanalysis of serial killers?

Tench (played by Holt McCallany) is also an FBI agent, and Ford's partner. He joins Ford in his quest to get the FBI to take psychology and psychoanalysis seriously, especially as it applies to criminal profiling. Tench follows Ford around the country as they travel to interview some of America's most prolific convicted serial killers, from Edmund Kemper to Ted Bundy. He assists Ford in developing theories about why these criminals behave the way they do, what makes them tick, and how they can be identified in the future.

But Tench isn't merely a fictional character. The entire series is based off the book Mind Hunter: Inside the FBI's Elite Serial Crime Unit, written by author Mark Olshaker and real FBI agent John Douglas, who served as the inspiration for the character of Holden Ford. Douglas' partner was Robert Ressler, a fellow FBI agent and the inspiration for Bill Tench. The pair truly did interview serial killers all across the United States in the 1970s, looking to identify any patterns in behavior that could serve to create a criminal profile for serial killers.

In fact, you wouldn't even be using the term "serial killer" without Ressler and Douglas. According to Psychology Today, Douglas and Ressler were the first people to coin the term "serial killer" as it applied to murderers with two or more victims killed on two or more separate occasions. It is thanks to the work of Ressler and Douglas that these murders were put into a classification of their own and studied as a separate criminal phenomenon.

As one might imagine, Ressler had some bone-chilling interactions with these murderers during the course of his career. One of the most frightening occurred when he was working with John Wayne Gacy, a convicted serial killer and professional clown who raped and killed teenage boys. NPR reported an anecdote Ressler shared with a documentary team regarding his time with Gacy:

Ressler told a documentary team that during one of his interviews with John Wayne Gacy, the killer gifted him with a colorful self-portrait of himself as a clown. On the back was an inscription that read: "Dear Bob Ressler, you cannot hope to enjoy the harvest without first laboring in the fields. Best wishes and good luck. Sincerely, John Wayne Gacy, June 1988." When Ressler asked what Gacy was referring to, his reply was simply: "Well, Mr. Ressler, you're the criminal profiler. You're the FBI. You figure it out."

But these frightening encounters weren't for nothing. As The New Yorker reports, Ressler and Douglas were able to use their findings to theorize that in general, serial killers belonged in two categories: "organized" and "disorganized." If it seems that the murders have been carefully plotted out, and the victims all fit a similar pattern or seem intentionally chosen, then the killer is "organized." If there is no discernible pattern or evidence of planning, then it stands to reason that the murderer falls in the "disorganized" category.

Though this may seem obvious, these categorizations allowed the pair to develop more specific criminal profiles for each type of serial killer. As written in The New Yorker:

The organized killer is intelligent and articulate. He feels superior to those around him. The disorganized killer is unattractive and has a poor self-image. He often has some kind of disability. He’s too strange and withdrawn to be married or have a girlfriend. If he doesn’t live alone, he lives with his parents. He has pornography stashed in his closet. If he drives at all, his car is a wreck.

These profiles allowed FBI agents and local detectives to have a clearer picture of the kind of suspect they might be looking for in any given serial killer case. Ressler, the real-life Tench, passed away in 2013 at the age of 76, but his work with Douglas continues to have a resounding impact in the criminal investigative landscape today.