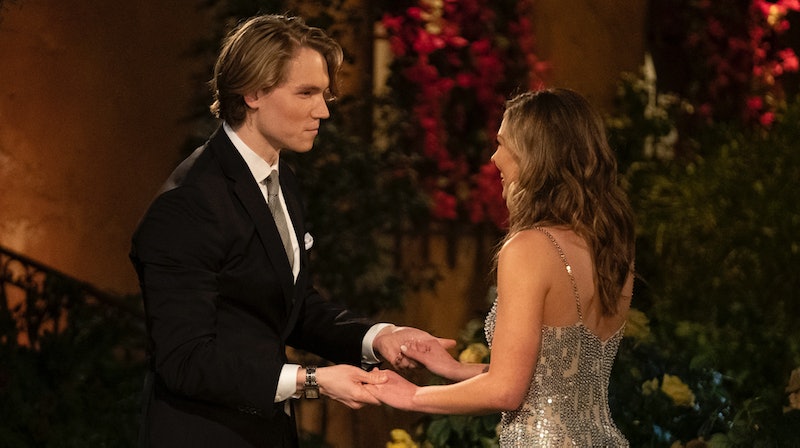 When Bachelorette producers decide to give someone a quirky occupation below their name, you know something strange is afoot. Case in point: Bachelorette contestant John Paul Jones' career is listed on ABC's site as simply... "John Paul Jones." What's the deal? Who is he? This tells us even less than the "social media participant" job listed below Kamil's name in Becca Kufrin's season.

According to the rest of his ABC bio, John's occupation is more than just being himself. He's a 24-year-old financial analyst from Maryland who often daydreams about his future wedding, travels the world, and enjoys "contemplating the meaning of life." It also notes that he "rarely uses words that are less than three syllables long," and that we're supposed to use his full name — John Paul Jones, every single time we refer to him. You're not even the first John Paul Jones, John Paul Jones! Leave the name privileges to the members of Led Zeppelin or the 18th century Navy heroes. He sounds exhausting already.

Aside from that, there's not much info about this apparently very important person. His Instagram account is private, and the only Twitter account that might be him isn't verified, and only has two followers. So we'll just have to wait to learn more about him until he greets Hannah with his many-syllabled words.

Some fans already have thoughts:

We can't judge John Paul Jones just yet, even though his first impression is a lot. He could be a perfectly nice, normal guy — the cast bios are always a little more outrageous than the actual men they're describing. Chris Harrison seems to be fully on board the John Paul Jones train, too, so there must be something there.

Harrison, as he does each season these days, hosted a live video on social media to share a little bit more about each contestant. As you may have guessed, the John Paul Jones segment was interesting.

Harrison basically told all Bachelorette viewers that in order to understand John Paul Jones throughout his run on the show, they'll have to give Fast Times at Ridgemont High a watch — he even referred to John Paul Jones as Spicoli, aka Sean Penn's character in the famous film. He added that John Paul Jones allowed Harrison to shorten his name to JPJ, a cue we should all take. "JPJ isn't a contestant on the show so much as he is a mood," Harrison said. "He's a way of life."

JPJ's occupation being listed as simply himself is kind of funny, but actually might not bode well for his actual chances with Hannah. As Claire Fallon, co-host of HuffPost's Here To Make Friends Bachelor recap podcast, told Bustle, a silly nickname is often a hint that producers don't expect viewers to take the contestant that seriously.

They've certainly teased his presence in interesting ways, regardless of how far he makes it, so it seems like we'll learn more as soon as The Bachelorette premieres. It seems unlikely JPJ won't make his presence known.

More like this
Kesha Is Down To Be The Next Bachelorette
By Jake Viswanath
Bachelorette Gabby Kissed Her New Fiancé On 'Dancing With The Stars'
By Jake Viswanath
Here's Exactly When Rachel & Tino's Fight Happened After 'The Bachelorette'
By Grace Wehniainen
Where Is Former Bachelor Host Chris Harrison Now & What Is His Net Worth?
By Hugh McIntyre
Get Even More From Bustle — Sign Up For The Newsletter