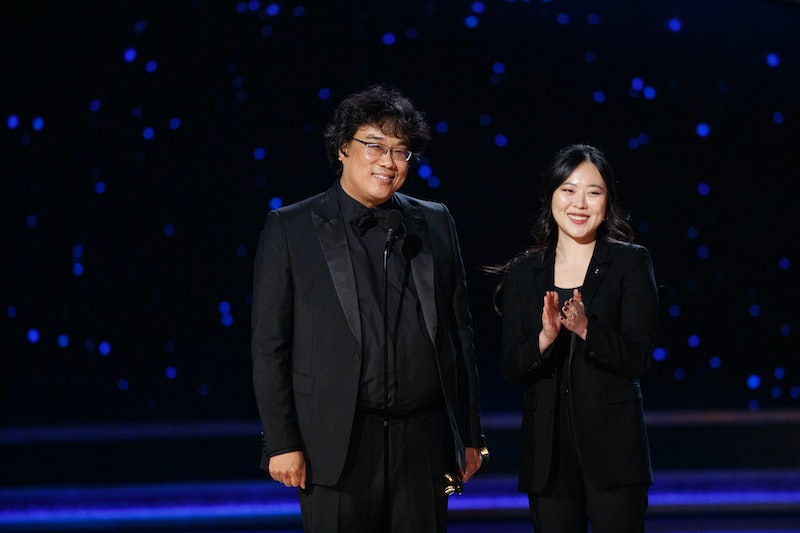 The 2020 Academy Awards were all about the South Korean film Parasite and its director, Bong Joon-ho. On Oscar night, Bong became the first person ever to win four Academy Awards for the same film, while Parasite became the first-ever foreign language film to win Best Picture. But in some ways, the real winner of the night was Bong's interpreter, Sharon Choi. Choi culminated her scene-stealing awards season run with another flawless bilingual performance, but just who is Choi?

Choi is a 25-year-old Korean-American who currently lives in Seoul, according to The Guardian, and she came aboard Bong's team in May of last year. Since then, she has made a number of high-profile appearances as the director's interpreter, as Parasite has gained momentum throughout awards season. She acted as Bong's interpreter during his Golden Globes acceptance speech after Parasite won for Best Motion Picture - Foreign Language, and even appeared with Bong during the director's recent interview with Jimmy Fallon on The Tonight Show.

While Choi's skills and charisma as an interpreter have made her a star, she may end up charting an entirely different course for herself in the years ahead. Choi is an aspiring film director herself, as her Oscar-winning boss revealed in a post-Oscars interview. "She's also a great filmmaker," Bong told The Hollywood Reporter (the director speaks English but is more comfortable speaking Korean, hence Choi's employment). Bong later expanded on Choi's filmmaking aspirations while speaking to Variety reporters after the ceremony, revealing that Choi is working on her own screenplay. "You already know she’s a filmmaker. She studied film in the university. So, I’m so curious about her script. Actually, she’s writing some feature-length script. I’m so curious about it," Bong said.

So what will Choi's movie be about? It's unclear what the aspiring filmmaker is writing about currently, but apparently she has an idea for a movie she'd like to start working on soon. According to The Wrap reporter Steve Pond, Choi plans on making a movie about awards season — a subject that she has come to know intimately. "Bong Joon Ho’s translator, Sharon Choi, is a director," Pond wrote on Twitter during the Oscars. "When awards season ends (i.e., tomorrow), she says she wants to start making a movie ... about awards season." Pond's tweet drew the attention of actor Henry Golding, who has already volunteered to star in Choi's awards season film — should she ever make it — writing on Twitter that he's "free this summer."

With Choi's talent and aspirations — not to mention her impressive industry connections — it's not out of the realm of possibility that fans could see her at a future Academy Awards ceremony taking home an Oscar of her own.