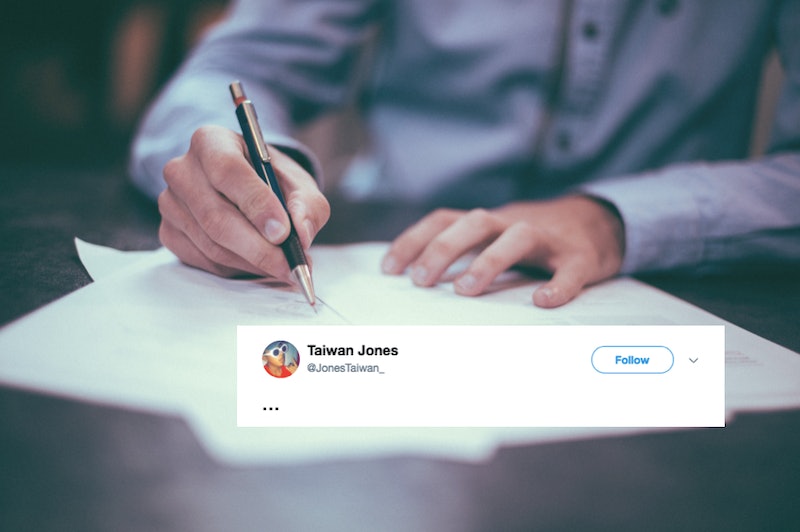 On Thursday night, the people of Twitter were on a mission: To find Taiwan Jones, the Howard University student who reportedly failed his midterm, according to a series of viral tweets. Earlier that day, Roy Handy, a photographer from Atlanta, tweeted, "This professor graded tests next to me the whole flight. If there’s a Taiwan Jones at Howard, boy you failed the f*ck out ya midterm." The hive mind of Twitter, ever eager to serve as the bearer of bad news, seized on the story, and #FindTaiwan started trending. A Twitter account purporting to be Taiwan Jones replied to the original tweet, which itself went viral, further stoking the imaginations of hundreds of thousands of tweeters. Alas, it would appear this viral story is a hoax.

Initially, it seemed like the whole incident had resolved itself in a fairly satisfactory fashion. After #FindTaiwan went viral, the user @JonesTaiwan_, whose Twitter bio says "Howard '19" posted a screenshot of a text his friend sent him informing him of his failure. Later, he tweeted "So... i just found out i failed my midterms but also went viral on the internet and i don’t know how to feel.."

But around the same time, another Taiwan Jones from Howard came forward. "f*ck" @TaiwanJoness, a "Marketing student at Howard" tweeted. Which raised the questions: Who is the real Taiwan, and how many Taiwan Jones are enrolled at Howard University?

As it turns out, there are no students named Taiwan Jones enrolled at Howard University, according to the Washington Post, who did a deep dive into this viral mess. When the Washington Post reached out to the historically Black college to ask about the supposedly failing young scholar, a spokeswoman confirmed to the Post there was no student by that name currently enrolled. The Post also contacted Howard College, a two-year college in Texas, and Howard Community College in Maryland, neither of which had a Taiwan Jones enrolled.

What about the Taiwan Joneses who came forward? According to the Post, both of those that went viral appear to be troll accounts. The first, @JonesTaiwan_, appears to have recently changed his handle from @SaucyIV_, and appears to have been a 16-year-old gamer named "Trent" who lives in Canada. The second, @TaiwanJoness, seems to be an alternate account for @Robinxvl, who reportedly described his second handle as a "troll journalist" account.

As for Roy Handy, the photographer who posted the original tweet, he too seems to be distancing himself from the story. He told the Post: “I cannot verify what school the student attends, which is why I said ‘if’ in context of the tweet."

He added: “I wasn’t aware of how much power this relatable topic could have across the HBCU community as a whole, so I’d rather leave the tweet to live in speculation of what could be or could not be fact or fiction. Therefore, again, I cannot verify any information on this for a story to be made, but I hope you enjoyed it!”

So, while there might be a Taiwan Jones somewhere who failed his midterm, he certainly doesn't go to Howard, and it's unclear whether or not he is aware of his grade yet.

Taiwan Jones is the latest in a long line of viral Twitter hoaxes. In September, a tweet from student Joseph Morales went viral, which supposedly showed his teacher peering down on her students from a hole in the ceiling. "My teacher left the room during a test so we all started sharing answers. Then I look up and she was staring right at me," Morales wrote. This, not surprisingly, was quickly debunked when Twitter users noticed the picture had been used in a different meme months earlier. In a more serious incident, a viral thread about what happened in Niger when four Army Green Berets died in an ISIS-linked ambush, has also been found to have a number of serious inaccuracies. In short, in the Golden Age of Fake News, it's a good idea to be wary of viral threads on Twitter.

And to the real Taiwan Jones, whichever school he may attend, if he really does exist: Sorry, bud. Better luck on your final.