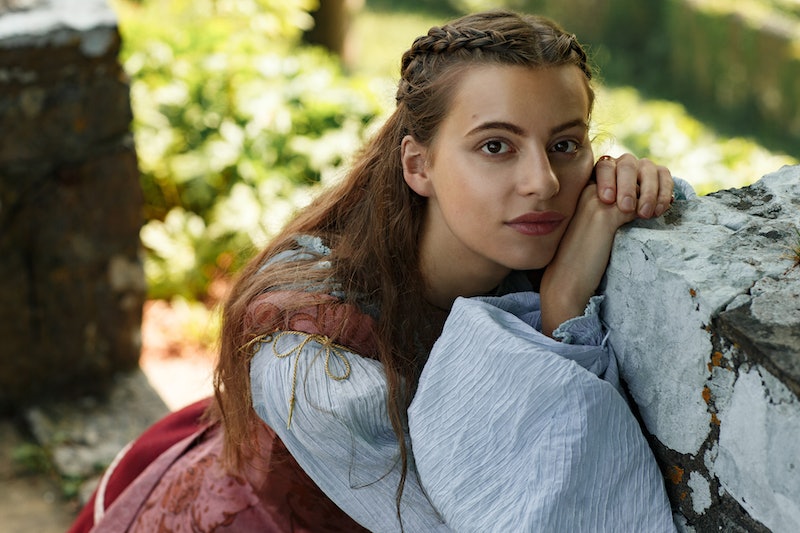 The Spanish Princess boasts some of your faves from British film and television, but there are a handful of new faces as well. Who plays Rosa on The Spanish Princess? Nadia Parkes is making her screen debut in the Starz series as one of Catherine of Aragon's trusted handmaids from across the sea.

Truly, this is Parkes' first on screen credit and first big professional acting job. Her IMDb profile is brand new. A deep dive on social media reveals that Parkes is a recent-ish graduate of the London Academy of Music & Dramatic Art (LAMDA), did a production of Cabaret in school (as well as a lot of other plays), and has a circle of actor friends that includes Game of Thrones' Sophie Turner and Peaky Blinders' Finn Cole.

One place you may have heard Parkes before is on the "Village People with Simon and Mark" podcast, an improvised pod in which the two hosts interview fictional people from their fictional village — Parkes played Catherine Moonshine, a dramatist. But even that's a relatively new podcast.

Landing this job right out of drama school is super cool. As Rosa, Parkes plays a supporting role, but is in quite a bit of the drama. She stars alongside Charlotte Hope, Laura Carmichael, Stephanie Levi-John, Olly Rix, and Georgie Henley.

Rosa is one of Catherine's two ladies in waiting on The Spanish Princess, who enters into her own romantic drama in the Tudor Court. What could become a stereotypical flirty/mischievous handmaid role, however, is deepened on The Spanish Princess with its emphasis on complex female characters and women behind the camera as well.

"We really wanted a strong female sisterhood in the show," said showrunner Emma Frost in an interview with Harper's Bazaar. Catherine, Rosa, and Lina come from Spain to England together, and are all navigating this new world as Catherine attempts to take her place as Queen.

"I think there's been a lot of conflict between the women in the show historically," continued Frost, speaking about dynamics between female characters in The Spanish Princesses' predecessors The White Princess and The White Queen. "That's brilliant and fascinating and fun to watch," she said, "but it felt like we hadn't ever had that really strong dynamic between three women who support each other. That was very appealing to us, especially with them coming in as the immigrants, and as the outsiders, and sticking together."

The friendship between the princess and her ladies juxtaposes some of Catherine of Aragon's more manipulative and conniving — for a reason — moments on the show. "There's really beautiful moments of compassion with Lina and Rosa," says Hope in an interview with Bustle. "[Catherine] really looks out for those girls, much more so than we would expect of a woman of that period of history."

Hopefully this will lead to more opportunities for Parkes. The White Queen and The White Princess were each only one season, but that doesn't mean this is the last we'll see of this The Spanish Princess actor.

More like this
UK Viewers Will Have To Wait To Watch The Handmaid’s Tale S5
By Maxine Harrison
'House of The Dragon' Episode 6 Will Take Place A Decade After Episode 5
By Kadin Burnett
The ‘Emily In Paris’ Season 3 Release Date Is Here, Plus The First Footage
By Bustle Staff
The ‘You’ Season 4 First Look Shows Joe’s New Identity And Potential Victims
By Bustle Editors
Get Even More From Bustle — Sign Up For The Newsletter