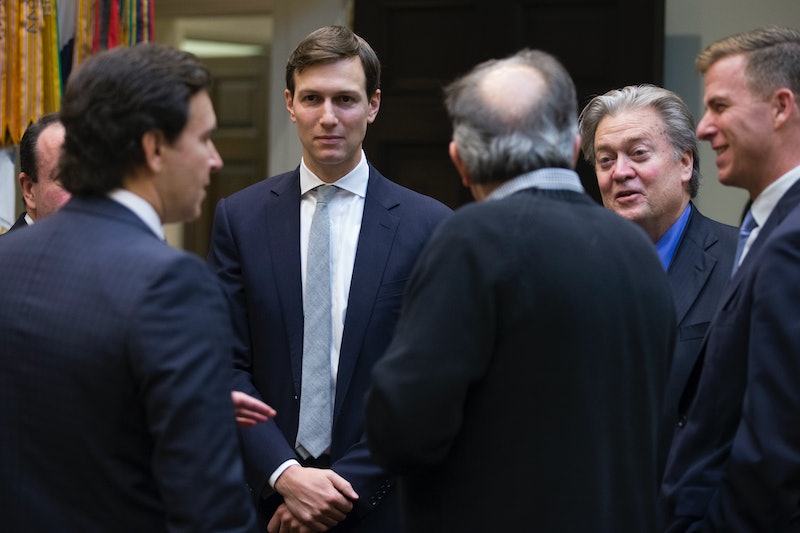 Jared Kushner is currently the senior adviser to President Donald Trump, his father-in-law. But long before Trump took office and signed the temporarily-halted executive order that restricts Syrian refugee and Muslim immigration into the United States, Kushner's own grandmother was vocal about immigration policy. But just who was Rae Kushner? Jared's grandmother was a philanthropist, founder of the Kushner Companies (with late husband Joseph), and Holocaust survivor, according to her New York Times obituary in 2004. Videos from a 1982 interview with Rae has been posted to Twitter by New York Times Magazine writer Jody Rosen, in which the elder Kushner is seen speaking about her own experience as a Jewish refugee during World War II for the Kean College of New Jersey Holocaust Resource Center.

Rae died in 2004, but her words live on as a powerful warning of the potential dangers for refusing entry to refugees, based on her experience during World War II. In the 1982 interview, Rae said, "I just want to say, if we would have [had] Israel at the time — as a country, like we have now — maybe so many people would not [have been] killed ... The whole madness for us was: for everybody was a place." She went on to say in the interview that Ukrainians and Polish people had their own countries, but the Jewish people did not have a place to seek refuge — sound familiar? The current civil Syrian war has left many residents seeking refuge in other countries.

In the interview, Rae recalled the how Roosevelt's immigration policy affected the Jewish refugees during World War II. "But for Jews, the doors were closed," she said. "Even our good president, Roosevelt. How come he kept the doors so closed for us for such a long time? How come a boat went for exodus, on the border, and returned back to be killed? This question I'll never know." And this sounds very much like Trump's executive order to ban Syrian refugees and temporarily ban immigrants from seven majority-Muslim nations from entering the U.S., which was issued a temporary stay by a New York federal court on Saturday night.

Later in the interview, Rae said the world needed to learn from the Holocaust and prevent it from anything similar happening again. "We need to warn the rest of the world to be careful. Who is coming up on the top of your government? Could it be another crazy guy like this — like [Adolf] Hitler, a racist?" She expressed her hope that the Holocaust was not repeated in the future, but said another leader like Hitler was possible. "It can happen if you don't watch who comes up," Rae said.

These are definitely warnings citizens should heed during these political times.