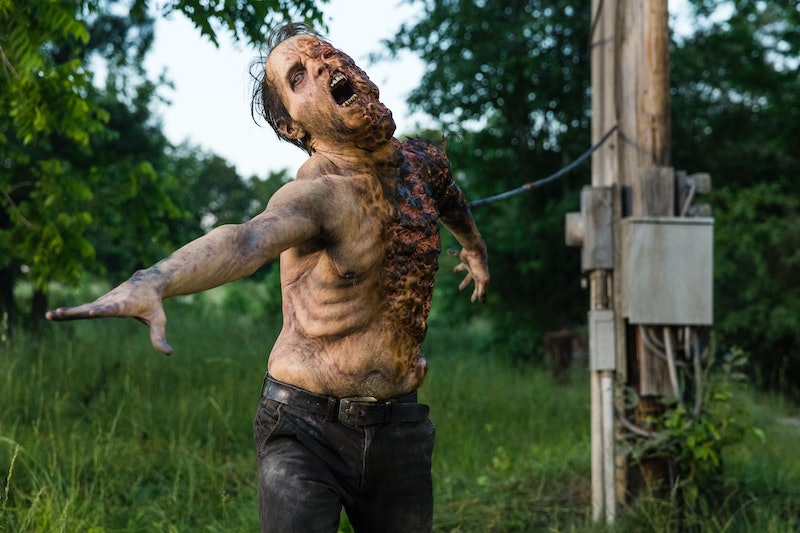 Rick's group on The Walking Dead has survived many conflicts and battles over the years, but this all out war against Negan and the Saviors is definitely going to take many lives. Who will die in The Walking Dead Season 8?

In an interview with Metro, actor Lennie James, who plays Morgan, warned Walking Dead fans to plan for the worst. "There are some big and devastating deaths in Season 8 and that’s the nature of this show," he said, "and this season is no different to the others. We’re going to feel losses, they’re huge and scary just like they are on other seasons. This season we’re going to really feel it. We’re going to really notice the absence going forward." What could that mean? Is it time to start rioting over Daryl? Anything could happen, as The Walking Dead really seems to want us to know. Nobody is safe. Got it?

After both Glenn and Abraham got brutally whacked at the beginning of Season 7, characters including Sasha, Spencer, and Olivia followed them to death's door. That's actually not that bad for a season of The Walking Dead, overall — which unfortunately does not bode well for Season 8.

Plus, the Oct. 22 premiere will be the 100th episode of the AMC series. Why is that significant to potential deaths? The milestone may not just be a celebratory event. As fans of the comics know, Glenn died in Issue 100. Something shocking this way comes. Here are some predictions for who might be offed next.

Especially if the Hilltop leader goes after Maggie, he may not survive.

Surely his story is coming to a close, right? This character is long overdue for a noble sacrifice.

He survived the Season 7 finale against all odds, and it would be awesome for this show to keep more than three LGBTQ characters alive and avoid the "bury your gays" trope. That said, as far as red shirts go, Aaron's boyfriend is a prime candidate. Hopefully he will take on more responsibility in Season 8 and become indispensable.

Dwight may redeem himself in Season 8, but this mustachioed Savior has got to go.

Negan loves to mess with his followers' love lives. If he ever finds Dwight's wife, who has crossed him multiple times, he might kill her on the spot.

Actions have consequences, and Eugene has to pay for his betrayal. The newly minted Savior is playing it safe to a nefarious end, and that is guaranteed to backfire — even if it just means Negan kills him for slipping Sasha that suicide pill. It could happen!

Nobody wants this, but if any character were to take a surprise fall, it might be Carol. She can only swoop in and save everybody so many times.

He's dead in the comics — and while the series doesn't always follow the original story's trajectory, fans should always be wary of when it does.

Negan probably isn't going anywhere for a while, unfortunately, but his beloved weapon was also recently "killed off" (destroyed) in the Walking Dead comics.

Look, it sounds crazy, but what if the "Old Man Rick" sequence from the SDCC trailer is some kind of afterlife situation? That would be tricky to pull off in a zombie apocalypse where life doesn't necessarily end with death, but it's possible.

As fans of the show, we all wish that just minor characters and anonymous background survivors bite it (and then start biting) on The Walking Dead. That's just not the way things go. It's a dangerous world with characters who make a lot of dangerous choices to keep on living. Season 8 will be no different.

More like this
An 'Everything Everywhere All At Once' Star Just Joined The 'Loki' Season 2 Cast
By Grace Wehniainen
Nicola Coughlan Shared A Lady Whistledown Excerpt From ‘Bridgerton’ Season 3
By Grace Wehniainen, Alyssa Lapid and Sam Ramsden
UK Viewers Will Have To Wait To Watch The Handmaid’s Tale S5
By Maxine Harrison
A New 'And Just Like That' Table Read Pic Confirms A Key Character's Return
By Jack Irvin and Grace Wehniainen
Get Even More From Bustle — Sign Up For The Newsletter