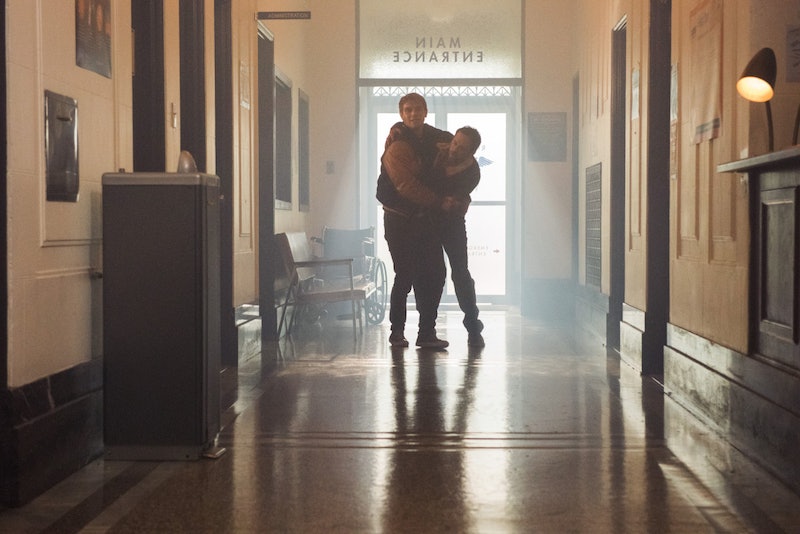 Riverdale is back with a bang (spoilers ahead) — literally, as the person who shot Archie's dad is still on the loose, and seemingly attacking more people connected to the town. At the end of the Riverdale Season 2 premiere, Miss Grundy is killed in her home by an intruder who keeps his face covered. Who is the man in the mask on Riverdale? It's probably the same person who shot Fred, almost without a doubt. And this may be the season's major mystery.

Why would someone want to harm both Fred Andrews and Archie's ex-lover? Everyone in Riverdale loves Archie, even when he doesn't deserve all of the attention. His only real enemies are the ones who didn't get to do a duet with him at the talent show. Secrets abound in this town that claims to have finally lost its innocence, even though it's apparent that it was never that pure to begin with at all.

What if Archie isn't the target? This could also connect back to Jason Blossom, another one of Grundy's students. There's clearly more to his death than we know too. What if Archie and Miss Grundy witnessed something else in those woods?

Fred Andrews' dreams could also be a clue. In them, the killer revisits him in various moments of his potential future, with just about every living or dead Riverdale character present. It could just be a dramatic representation of his trauma, but it could also be his subconscious trying to remind him of something.

Unless it's just a random serial killer, which is possible, the "Angel of Death" on Riverdale is probably somebody we know, or at least know of. They seem to have light eyes, blueish or green. They are perhaps a middle aged-ish white man. However, that not-a-ski-mask black hood effectively and obviously makes it difficult to confirm their identity. Here are some options as of this new development:

Or rather, someone that he hired to take out the hits. Played by Mark Consuelos in Season 2, Veronica's father seems to be at the center of a lot of dark deeds. Veronica certainly seems suspicious of his involvement with the attack on Mr. Andrews. It just doesn't explain why he would want Grundy dead. That connection is the biggest part of this new mystery.

We learned about this long lost sibling in Season 1, and he will be played in Season 2 by actor Hart Denton. Coming back as an avenging angel of death would be quite an entrance.

Maybe the Cooper pater familias finally cracked. Betty has a dark side, and so might her dad. Plus, the guy kind of looks like him — and while observations like that didn't necessarily help The Flash fans discover the identity of their masked villains, it's something to think about.

This anonymous blonde student of Grundy's could be the one who did the deed. Maybe he came back in through that open window. We only saw Ben's face and shirt, both of which were obscured by the killer later.

The scout is small, and an overall good responsible person, but his survivalist instincts are intense. Maybe someone connected to him is connected to the killer.

Could Kevin's father be the killer? Yeesh, say that five times fast. It would be a twist — that's for sure.

Maybe the Riverdale zombie theory is coming true, and an undead Jason is behind these attacks. Come on, you know that's what you really want.

At least Fred Andrews is alive. While he may not remember any details about his attack, Archie didn't lose his father. Hopefully this killer will be caught before anyone else is murdered in Riverdale. The tone is set for Season 2, and it's darker than a double chocolate milkshake.

More like this
Everything You Need To Remember Before ‘The Handmaid’s Tale’ Season 5
By Grace Wehniainen
This House of the Dragon Character Will Create Another Scandal For Rhaenyra
By Kadin Burnett
Nicola Coughlan Shared A Lady Whistledown Excerpt From ‘Bridgerton’ Season 3
By Grace Wehniainen, Alyssa Lapid and Sam Ramsden
Devi Is Going To Meet A “Smoldering Bad Boy” In ‘Never Have I Ever’ Season 4
By Jack Irvin and Gabrielle Bondi
Get Even More From Bustle — Sign Up For The Newsletter