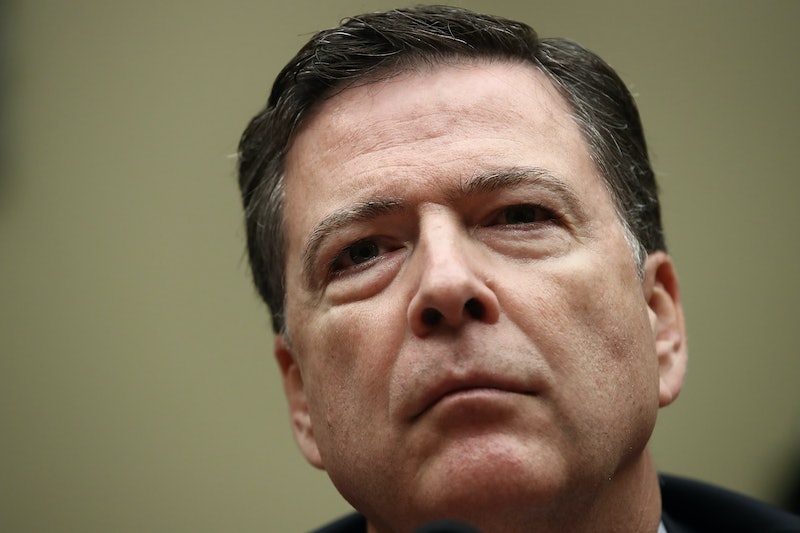 In a day full of congressional hearings for President-elect Donald Trump's administration, some separate news comes once again concerning the topic of Hillary Clinton's emails. But this time, the scrutiny is on the FBI. The Justice Department inspector general announced Thursday that it will investigate the FBI's handling of Clinton's emails by FBI Director James Comey. Per ABC News, the inspector general plans to look at whether Comey's and the DOJ's actions were appropriate under DOJ guidelines.

Back in October, right before the presidential election, Comey wrote a letter to Congress to inform them that the FBI had found additional emails during a separate review that involved Rep. Anthony Weiner that could be connected to the previously-closed investigation on whether Clinton had mishandled classified information. Many have questioned whether the timing of this release had any effect on the outcome of the election. The Justice Department has a longstanding policy against politically-charged actions so close to an election.

According to CNN, the decision to launch a probe was made after requests from Congress and the public. Inspector General Michael Horowitz said they will specifically look at whether DOJ or FBI policies were followed when Comey announced in July that no criminal charges would be pursued against Clinton, whether the two organizations improperly disclosed non-public information, and if the release of some Freedom of Information Act request pre-election was improper.

"entirely appropriate and very necessary, but also not surprising because the deviations from the protocols at the FBI and Justice Department were so glaring and egregious in terms of their handling of not just the email investigation of Secretary Clinton, but just in general the amount of leaks that were coming from the FBI throughout the election and even post-election, is something that...I think most observers and former officials at the Justice Department realized cried out for an independent review."

Politico reports that along with looking into Comey and the FBI's actions related to Clinton's emails, the inspector general will also look at the FBI's actions in regard to investigations about alleged misconduct at the Clinton Foundation.

This announcement of the investigation may certainly be a little vindication for those who questioned Comey's actions and felt that they were irresponsible leading up to the election. We'll likely have to wait a while for the findings, but it's a step in the right direction that the matter is being reviewed.