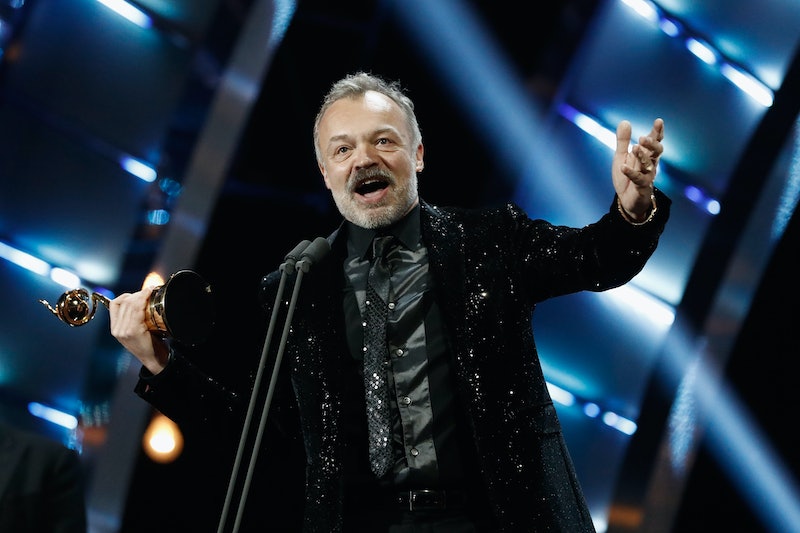 I'm a massive fan of The Graham Norton Show. Graham Norton has such a fun, comical energy that works so well when interviewing some of the biggest stars on the planet. And I love the shared sofa set up, which allows celebs to interact and have all the banter side by side. So I was a little alarmed when I heard that he would not be on our TV screens tonight. So, why isn't Graham Norton hosting his show tonight, and who is taking over from the beloved presenter?

Well, fear not, because Graham is simply away preparing for the Eurovision Song Contest, which he narrates for British television. The contest airs tomorrow evening (18 May), which explains why he is over in Tel Aviv, where it is held, during this evening's show.

Incredibly, this is the first time in 20 years that Norton will miss his own show filming, but luckily, he's asked a very capable alternative to step in. Enter Jack Whitehall.

The comedian will be brushing off his presenting shoes to host this evening's The Graham Norton Show, and he sounds pretty thrilled to be doing it:

“I was so honoured Graham asked me to do this for him,” Whitehall said, according to the Radio Times. “The thought of stepping into his huge showbiz boots fills me in equal measure with fear and excitement. Worst case, I will make everyone appreciate just how lucky we are to have him.”

“I’m thrilled to know that I am leaving the show in Jack’s capable hands. He is bound to do an amazing job. I should warn him not to get too comfortable in my chair though, because like a slightly fey terminator, I’ll be back!”

However, this is not the only twist this week's show has sprung on us. Apparently, the guest list for the sofa has also been changed, with Paloma Faith no longer being able to appear. In her place, Britain's Got Talent's David Walliams and footballer Peter Crouch will be appearing.

Also on the sofa this evening will be Game Of Thrones star Gwendoline Christie, and fellow actor Luke Evans. What a nice crew for Whitehall to interview! I wish him all the luck for tonight.

Meanwhile, Graham Norton will be brushing up on his hilarious jokes for the Eurovision Song Contest. The presenter has been commentating at the contest for an impressive 11 years now, taking over from Sir Terry Wogan in 2008.

This year, Britain will be represented by 21-year-old Michael Rice, who will be singing the track 'Bigger Than Us'. The young singer could hardly believe his luck when it was announced he had won the chance to represent Britain "I can’t believe I won," Ride said. :I never in a million years thought I’d get the chance to do this experience, never mind win it."

“I’m really grateful for all my supporters out there who voted for me, and who’ve been there for me along this journey. Let’s do it! Let’s go to Tel Aviv and try and bring it home for us.”

The Graham Norton Show, hosted by Jack Whitehall, will be on TV tonight, 17 May, at 11 p.m. on BBC1, while The Eurovision Song Contest Grand Final will begin at 8 p.m. on Saturday, 18 May on BBC1.