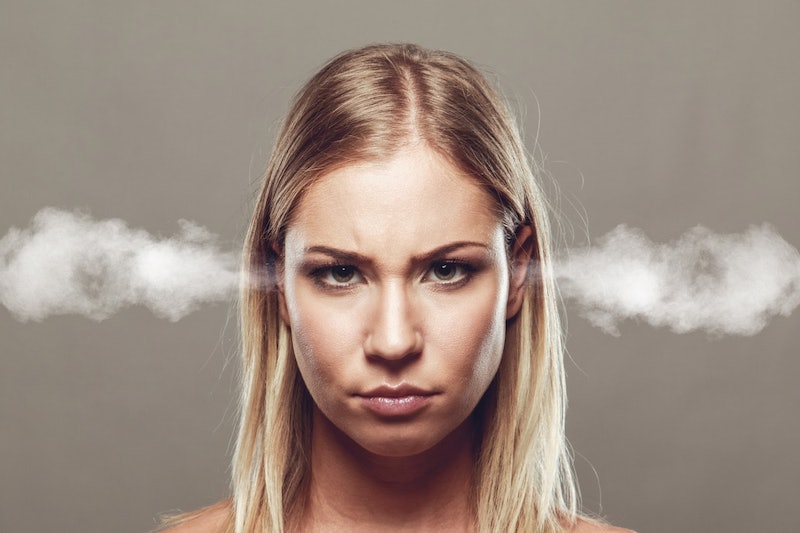 If you've tried to leave behind something that's not good for you — smoking, an unhealthy relationship, sugar — then you know it's not as easy as it sounds. It's hard to ditch a bad habit because humans are actually motivated by negative emotions, which can perpetuate bad habits rather serve as a catalyst for change, according to Forbes. Additionally, a study published by the Economic and Social Research Council noted that being motivated by fear and regret is the least effective way to change your behavior.

This is why, despite having all of the information that something we're doing is not good for us, we have a hard time ceasing a particular behavior. Take smoking, for example. Everyone knows smoking is terrible for you. There are zero health benefits, and it causes cancer. But, I have a confession to make. I still smoke.

I actually quit smoking about eight years ago, but during a particularly stressful time a few years back I picked it up again, and now I'm having a harder time quitting than I did the first time. While I know it seems crazy to have a cigarette after a three-mile hike, that knowledge isn't going to stop me from doing it. Similarly, many of my friends are addicted to sugar, but simply can't walk away from it despite negative health consequences. Knowing something is bad for you doesn't equal suddenly stopping the behavior.

Wouldn't it be great if it were that simple? So, just how do you ditch a bad habit? Here's what the experts say.

Replace Bad Habits With Good Ones

Personally, one of the reasons it's so hard for me to stop smoking is because the habit is layered with a lot of emotions. Smoking is something I associate with being social, and for someone who has social anxiety, smoking gives me something to do when I'm feeling anxious. It also offers me a group of people I know how to talk to — other smokers.

I met my ex-husband because we were both smoking on a fire escape at a party where we didn't know anyone. In fact, most of my relationships started with cigarettes, and it's strange to think how my life would be completely different if I had never started smoking. Alternatively, I think smoking is pretty gross, and I take great pains to ensure most people don't know about my habit, but I guess the cat is out of the bag now.

For my friends who turn to sugar, they tell me it's associated with trying to recapture feelings of comfort and safety from childhood. While I, and they, may want to stop the actual behavior, we don't want to lose the sense of security it lends us. Experts recognize this, and say the key to success is replacing the negative behavior with a positive one instead of simply stopping the bad habit, which can leave a physical and emotional hole that we instinctively want to fill.

"[The] key in an alternative behavior: making tea instead of indulging your coffee fix or doing pushups instead of smoking, can utilize your body’s inner clock for your benefit rather than harm," Success.com noted. "Alternatively, promise yourself a reward for each time you avoid the behavior. Your inner operating system should soon take note."

Blame It On The Brain

I have a friend who used all the money she saved by quitting smoking to do something nice for herself each week, like getting a manicure or a massage. For me, I know I need to replace smoking with something else, at least at first, because the actual activity is so subconsciously ingrained in my brain. This is because once you start to do something habitually, your brain sort of checks out and automates the process for you, which creates a habit loop.

"When a habit emerges, the brain stops fully participating in decision making," Charles Duhigg explained in his book The Power of Habit: Why We Do What We Do in Life and Business. "It stops working so hard, or diverts focus to other tasks. So unless you deliberately fight a habit — unless you find new routines — the pattern will unfold automatically."

Additionally, both good and bad habits trigger the reward center in your brain. This is why the knowledge that something is harmful is not enough to make most people change their behavior.

"Enjoyable behaviors can prompt your brain to release a chemical called dopamine. If you do something over and over, and dopamine is there when you’re doing it, that strengthens the habit even more," Dr. Russell Poldrack, a neurobiologist at the University of Texas at Austin told the National Institutes of Health. "When you’re not doing those things, dopamine creates the craving to do it again. This explains why some people crave drugs, even if the drug no longer makes them feel particularly good once they take it.”

So, you can officially stop beating yourself up if you've been unsuccessful in breaking a bad habit. However, that being said, Forbes recommends some accountability tricks to help increase your chances of success. Trying to change a bad habit on your own is hard, and it's OK to ask for help.

I know more than anyone how hard it is to stop doing something that makes your feel comfortable. But, if you're ready to eradicate negative habits that are no longer serving you there are few things you can try, including using an accountability partner or coach, visualizing the outcome you want, weaning off the habit slowly, and forgiving yourself if it takes you more than one attempt to kick your negative behavior to the curb.

I'm pretty sure I've sworn off smoking eleventy million times in the past two months, but I always cave and think to myself, just one more pack. Going forward I'm going to focus on reducing my habit slowly, and replacing cigarettes with something else, since I already know that stopping suddenly doesn't work for me. Stepping down slowly is OK, because, the goal is progress, not perfection.