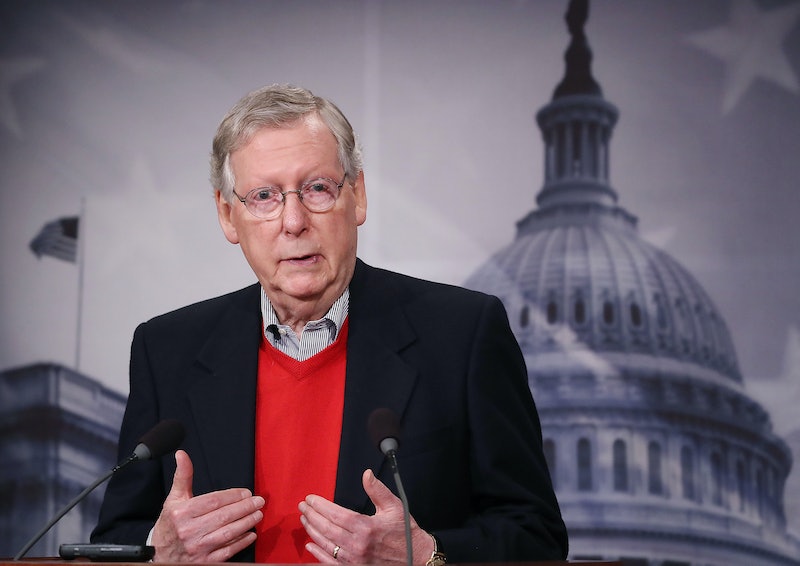 With just a little over a week until the inauguration of President-elect Donald Trump, the Senate Republicans held a midnight vote to repeal Obamacare on Wednesday night while many of us were sleeping. The voting marathon to repeal Obamacare, officially known as a vote-a-rama, started around 6:30 p.m. on Wednesday and continued until early Thursday morning.

During a phone interview with The New York Times on Tuesday, the President-elect vaguely alluded to an Obamacare repeal vote occurring, "probably some time next week." In keeping with that promise, Republicans got to work during the all night voting marathon. But why in the middle of the night?

The reason this particular voting process didn't close until 1:30 a.m. ET was because a vote-a-rama is by definition a lengthy process during which Senators both challenge and present amendments to proposed pieces of legislation — which, in this case, involved Democrat members of Senate fighting to defend Obamacare. Due to the lengthy nature of this process, and the unpredictability of how many amendments will be presented, vote-a-ramas are required to happen during hours that don't overlap with regular Senate hearings.

The all night process resulted in a 51-48 vote along party lines in favor of a budget resolution that would lay the groundwork for Obamacare to be stripped. While the actual piece of legislation that would result in stripping ACA won't be voted on until Friday, the late night votes on Wednesday laid out the plan to dismantle. Unfortunately, as of yet, the Senate Republicans haven't laid out a clear alternative to Obamacare once it's repealed, which could pose a grave problem to the 20 million people whose health insurance was made possible by Obamacare.

For Republicans, it was a proactive move to hold a vote-o-rama about the legislation before Trump is even office, and yet, the quick movement could potentially backfire without a replacement plan. At least, that's what a handful of both Republicans and Democrats have expressed.

Tennessee Republican Sen. Bob Corker told CNN that he thinks it would be wiser for his fellow Republicans to find a replacement plan before stripping Obamacare. "To me, it's much more prudent to figure out where you're going to go from here, and attempt to do it all at the same time. People will see some of the flaws in just repealing only," he said.

In what might provide a sliver of hope to those concerned about the possibility of the ACA being repealed, Corker is hardly alone in his concerns about the lack of replacement. North Carolina Republican Rep. Mark Meadows told The Washington Post that he also thinks there should be a firm healthcare replacement plan established before moving forward. "We just want more specifics. I’m willing to take a vote today if we have the specifics. So it’s not as much slow it down for slowing-it-down purposes as it is, we need to know what we’re going to replace it with," he said.

Unsurprisingly, the concerns on the other side of the political aisle don't so much echo those of Meadows and Corkers, but rather take it a step further. Vermont Sen. Bernie Sanders openly expressed his disapproval of the possible demise of Obamacare to POLITICO, making sure to point out how many millions of Americans could be left in a lurch without healthcare. He said, "I understand Sen. Corker wants more time. Maybe they will develop a plan, but right now, what they are talking about is repealing legislation which has brought millions of people health care and they have no substitute."

While we wait to see how the outcome of the House vote on Friday, those of us opposed to the stripping of healthcare insurance can call our representatives to protest the GOP repealing Obamacare. The job of our representatives is to represent the concerns of their constituents, so don't hesitate to make your voice heard if you are concerned.