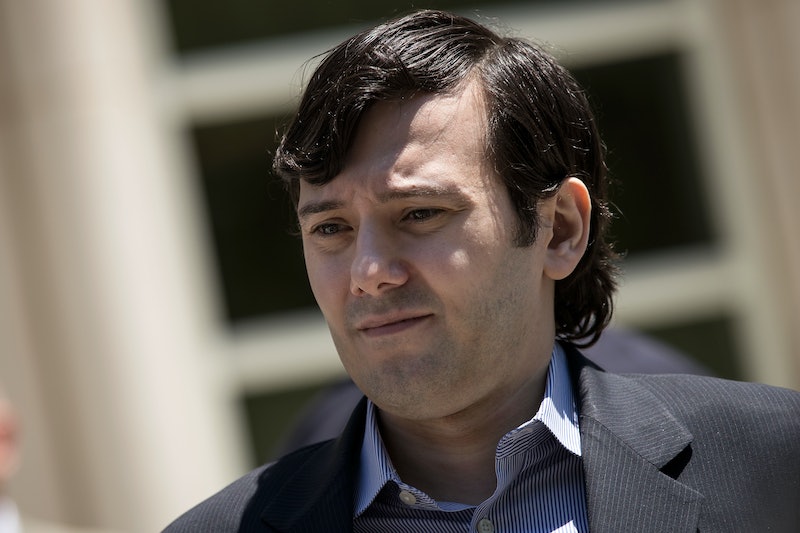 Hey, here's some good news: On Sunday, Twitter took action against a user who had been engaging in targeted harassment against a female journalist. Here's some even better news: The user in question was former pharmaceutical executive and overall jerk Martin Shkreli, who had been harassing Teen Vogue writer Lauren Duca. The nature of his reported harassment was super creepy, and Shkreli was suspended from Twitter as a result.

It began with an op-ed Duca wrote for Teen Vogue in early December, called "Donald Trump Is Gaslighting America." Shkreli, a vocal Trump supporter, proceeded to DM Duca and ask if she'd like to attend Trump's inauguration with him (A real jokester, that Shkreli!). In response, Duca took a screenshot of his "invitation" (the sincerity of which is unclear) and tweeted it to her followers, noting that "I'd rather eat my own organs."

And then Shkreli got creepy. He created a collage of pictures of Duca, wrote "For Better or Worse, Til Death do Us Part, I’ll Love You With Every Single Beat of my Heart" underneath, and made it his banner image. He also changed his profile picture to an image of Duca and her husband, but with Shkreli's face photoshopped into it, so it looked as if he and Duca were cuddling on a couch. Ugh.

An outraged Duca then highlighted Shkreli's actions in a tweet, in which she tagged Twitter co-founder Jack Dorsey. Predictably, Shkreli responded by criticizing Duca.

"dont [sic] disrespect the sovereignty of my love for you," Shkreli tweeted. "your [sic] being unfair."

Shkreli then claimed to have purchased the domain "marrymelauren.com," and said he had a "small crush" on Duca in his Twitter bio. He also tweeted out the poster to the 2009 film The Proposal, but modified to depict — you guessed it — Shkreli proposing to Duca. Soon, Shkreli's fans created and sent more images depicting the two together.

“The Twitter Rules prohibit targeted harassment, and we will take action on accounts violating those policies," a representative from the company told BuzzFeed.

It's encouraging to see Twitter take action against Shkreli here. His behavior was gross and invasive, and it wasn't even the first time he'd acted creepily toward a female journalist on Twitter.

"Trolling seems to be an automatic occupational hazard for female writers who receive any level of professional attention," Duca said in a statement to The Washington Post. "That’s something Twitter needs to work harder to fix, but obviously the problem runs far deeper." When informed by BuzzFeed that Shkreli had been suspended, Duca called Shkreli "an entitled creep [who] absolutely deserves to have his account suspended — perhaps indefinitely.”

Shkreli, who was charged with securities fraud in 2015, which he denies, and goes on trial in June, accused Twitter of enacting a "double standard" in suspending him. He also alleged that Duca "has harassed me a lot" as well, though he offered no examples.

One postscript: The Washington Post reported that Shkreli's suspension will most likely be temporary, so he may be back on the prowl before too long. But still, Twitter will be a slightly better place for at least some time, and female journalists will be able to enjoy a partial reprieve from Shkreli's online harassment.