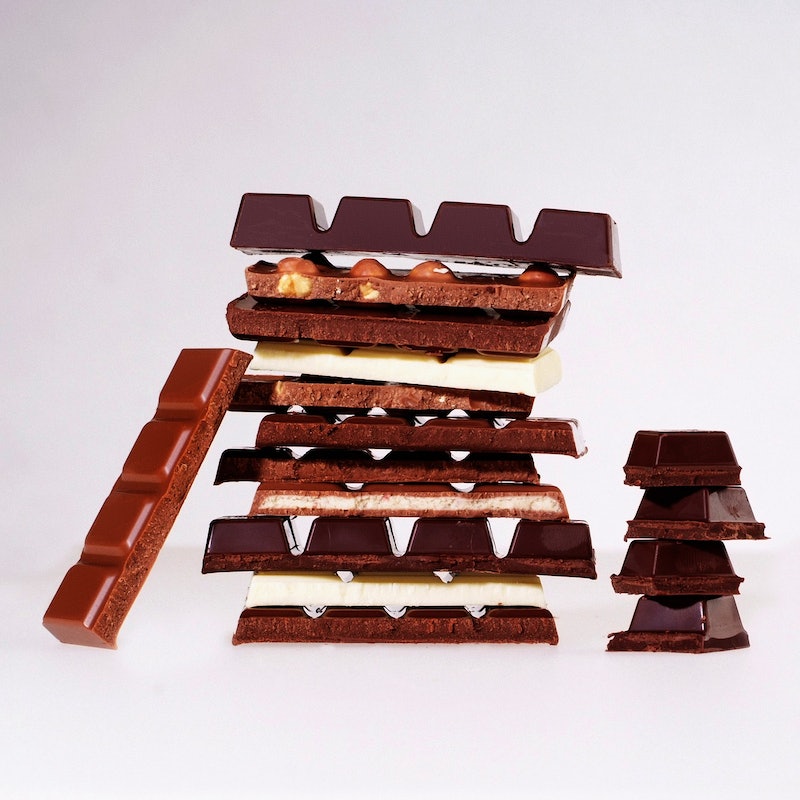 You might are already know that chocolate can mimic feelings of being in love. Now there's one more reason to celebrate chocolate — it's actually really good for you. Myriad scientific studies conclude that chocolate is beneficial for your health, which is why you should eat chocolate every day. This is science I can get behind. And, isn't it nice to know that something you already love is actually good for you, too? A study published in the journal Frontier in Nutrition found that cocoa flavonoids — present in chocolate — are beneficial to your brain, specifically memory, attention, and cognition.

Studies suggest that a regular intake of flavonoids present in cocoa could be associated with improved cognitive function, decreased risk of dementia, and cognitive decline, lower prevalence of cognitive impairment, better cognitive evolution over a 10-year period, and better dose-dependent cognitive performance in normal aging, Frontier in Nutrition reported.

While you likely don't need to worry about cognitive decline for decades, proactively doing things to keep your brain strong and engaged can decrease your chances of suffering from these impairments when you get older. "Cocoa flavanols long-term intake could effectively improve cognition trough increased neural efficiency," the study noted.

Why Chocolate Makes You Feel Good

I love chocolate. Hot chocolate, chocolate ice cream, cake, candy bars, etc. In addition to keeping your brain healthy, another study found that letting chocolate melt on your tongue produces feelings in your body and brain that are similar to experiencing a passionate kiss, but the effects of chocolate last four times as long as a lusty lip lock.

What's more, the BBC News reported that chocolate contains a number of psychoactive chemicals, including anandamide, a neurotransmitter whose name comes from the Sanskrit word ananda, which means joy, bliss, and delight. While these chemicals aren't present in amounts large enough to get you high, they do promote an overall sense of wellbeing, and they stimulate your brain in positive ways.

This doesn't mean you should go out and buy eleventy million chocolate bars. As with most things in life you can overdo it, especially if you're choosing poor-quality chocolate low in flavanols and high in sugar.

The Best Chocolate For Your Brain

It often seems that things that make you feel good aren't always good for you, but preliminary studies on the specific properties of chocolate are promising.

If you're really after the health benefits of chocolate be mindful to choose dark chocolate that contains the most flavanols. This doesn't mean you can't nosh on milk chocolate or white chocolate, too. Just remember to make chocolate a part of a balanced diet, not your main meal.

Now that you know the good news, go forth and feed your brain, because, chocolate!