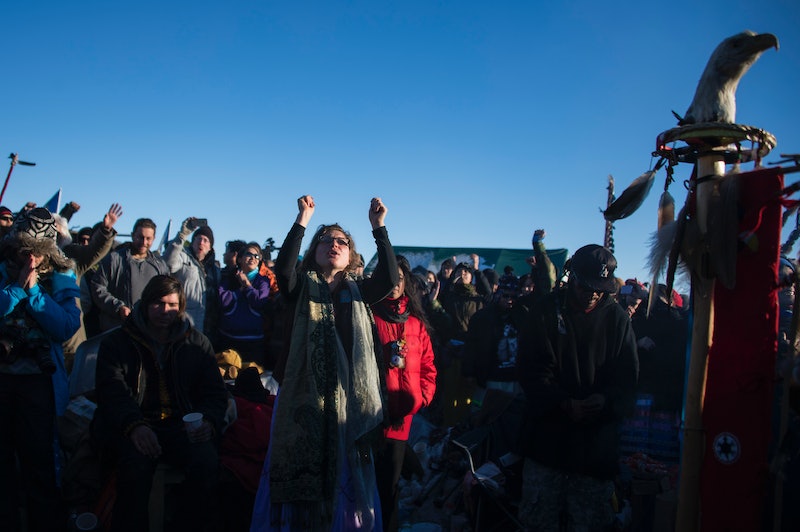 Tuesday morning, four days into his term, President Donald Trump signed an executive order allowing the Keystone XL and Dakota Access oil pipelines to go forward as originally planned, after the Obama administration had previously halted their constriction. The two pipelines had come under heavy fire from environmental groups, and, in the case of the Dakota Access Pipeline, from Native American activists who felt that the pipeline was infringing on ancestral lands of the Sioux tribe and impeding its access to water.

The protests against the Dakota Access Pipeline grew over the course of 2016, with thousands coming to Standing Rock, North Dakota to block the pipeline, mostly through nonviolent tactics. The protests led to some intense clashes with police, who used tactics like water cannons and rubber bullets, as well as numerous arrests, against activists they alleged were rioting. In November, the United Nations denounced the treatment of protesters by law enforcement as "inhumane."

The protests largely simmered down after the Obama administration announced it was asking the Army Corps of Engineers to find an alternate route for the pipeline, though they did not fully end even then. Many protesters were worried that Trump would enter office and reverse President Obama's action, which of course he did, less than a week into his tenure.

With the Trump administration so quickly backing off on the Obama administration's decision, the movement that fought against the pipeline is likely to be emboldened yet again. Social media has been inflamed by the decision, though it is not yet clear what kind of organizing or action will come out of it.

Sen. Bernie Sanders, who opposed the pipeline and joined in protests at the White House in November, blasted Trump in a statement shortly after the order.

In the wake of the massive Women's March protests around the country against Trump last weekend, it seems likely that the organized activist left that has been awakened under his presidency will fight hard. Here's Linda Sarsour, one of the organizers of the march, calling for action to fight the pipeline, as well.

It's likely that there will be a growing movement for organized effort against the pipelines in the coming days.