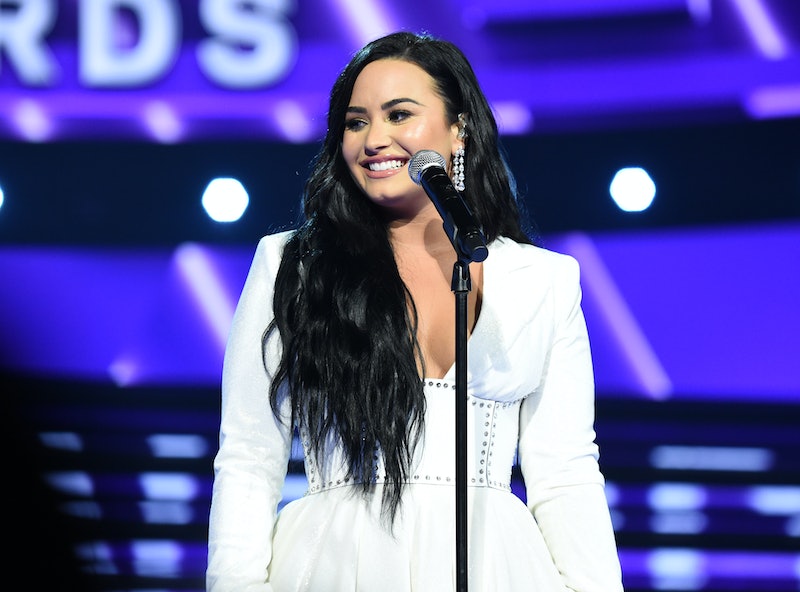 It’s only the second month of 2020, and Demi Lovato is already making it her own. The release of her latest single "Anyone" marked her return to music, followed by a performance at the Grammys on Jan. 26 and her rendition of the American National Anthem at Super Bowl LIV on Feb. 2. While the singer hasn’t officially announced a new record as of yet, I'm still wondering, will Demi Lovato tour the UK in 2020?

Despite there currently being no new album to support, the release of "Anyone" and Lovato’s most recent high-profile performances are the perfect set-up for a new tour, as she's got the world waiting with bated breath. I have reached out to her publicist to see if there is any info they can share about the potential of an international tour, and I will let you know if and when I hear something.

The singer last performed in the UK in 2018, in support of her sixth album Tell Me You Love Me. The European leg of that tour consisted of 13-dates, including four nights in the UK in London, Birmingham, Glasgow, and Manchester.

A month after the UK dates, Lovato was hospitalised following an overdose. The singer then took a break from music and social media to focus on her health, cancelling the remaining dates of the Tell Me You Love Me tour. “I’m so blessed I get to take this time to be with my family, relax, work on my mind, body and soul and come back when I’m ready,” she tweeted a few days before Christmas in 2018. “I have my fans to thank for that. I’m so grateful, truly. I love you guys so f***ing much. Thank you.”

Lovato announced that she’d signed with Scooter Braun last May, who also manages the likes of Ariana Grande and Justin Bieber. “Dreams came true today for me. I officially have a NEW MANAGER!!!” she captioned the Instagram post. “Couldn’t be happier, inspired and excited to begin this next chapter with you Scooter!!! Thank you for believing in me and for being apart of this new journey.” It’s been a long time coming, but it seems that this new journey has officially begun.

And as USA Today notes, Lovato also dropped another major hint at a new record on her Insta stories last summer. “You know what’s great about making an album? You get to say anything you want, be as open and honest as possible and finally tell your side of the story regardless of who might not like it,” she wrote.

In the meantime, catch me watching that Super Bowl performance on repeat for the foreseeable future.