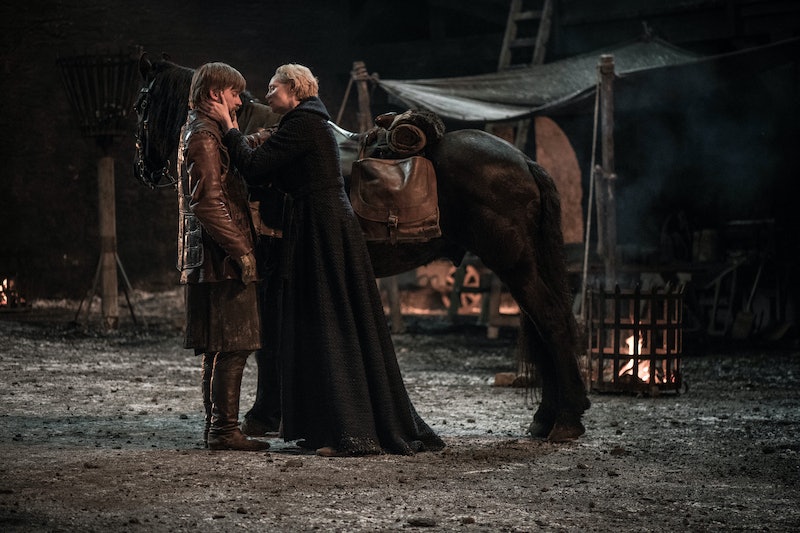 The pieces are moving again on Game of Thrones, and not necessarily in a good way. The Battle of Winterfell may have brought everyone together, but that joyous unity didn't last long. Jaime Lannister left for King's Landing on Game of Thrones — but why? Is he going to defend his sister Cersei, or murder her himself?

Jaime Lannister was ready to live in Winterfell with Ser Brienne of Tarth at the midpoint of Season 8, Episode 4. We should have known then that him finally finding happiness/having sex with someone other than his sister wasn't going to last. By the end of the episode, he left Brienne — assuring her that he was, in fact, not the good guy. He's done bad things for his sister before and he's going to do them again. The scene was absolutely heartbreaking, for Brienne and for Jaime.

Is he really going to go and rejoin the Lannister side? It's genuinely difficult to believe, even though he basically spelled it out. The clues, perhaps, are in the editing — and what they tell us triggered Jaime's decision to go. Still thinking he was going to move in with Brienne and start a life with her up North, he was informed that Cersei Lannister had defeated Daenerys Targaryen's troops, killed Rhaegal, and taken Missandei hostage.

"I always wanted to be there when they execute your sister," Sansa all but sneered at Jaime. "Seems like I won't get the chance." Jaime reacts to this, and the very next scene is him making the decision to leave Brienne and go to King's Landing. This isn't the face of a man returning to the woman he loves, or even resigned to doing the wrong thing.

Jaime knows that Ser Brienne's loyalty lies with Sansa Stark, and technically he still owes a debt to her late mother Cat as well. It seems more likely that he believes he has to be the one to stop Cersei. He was a Kingslayer once before, and he could become the Queenslayer as well. Maybe he trashed himself on the way out so that Brienne would stop trying to stop him.

The only catch is that Cersei is currently pregnant with their child. All of Jaime and Cersei's previous children have died, and he may not be so willing to kill a fourth. However, she's telling the world that the baby is Euron Greyjoy's — which might be so much of a blow to Jaime that he stops caring.

There's also, you know, the Bronn of it all. In theory, Jaime and Tyrion's best buddy for hire is waiting for the opportune moment to take one or both of them out with an arrow. Not only does that mean Jaime needs to watch his back, it also means that Cersei wants him dead. She may not welcome him back into her inner circle and allow him to support her, or kill her, or whatever he's planning to do exactly.

Several characters on Game of Thrones seemed resigned to some kind of destiny in this episode. Jon gave up being a Stark, Arya went back to being an assassin, and Daenerys actually said the word "destiny" as she flirted with Targaryen madness. If Jaime Lannister's destiny lies by Cersei's side, so be it, but there are a still a few ways that this story can go.