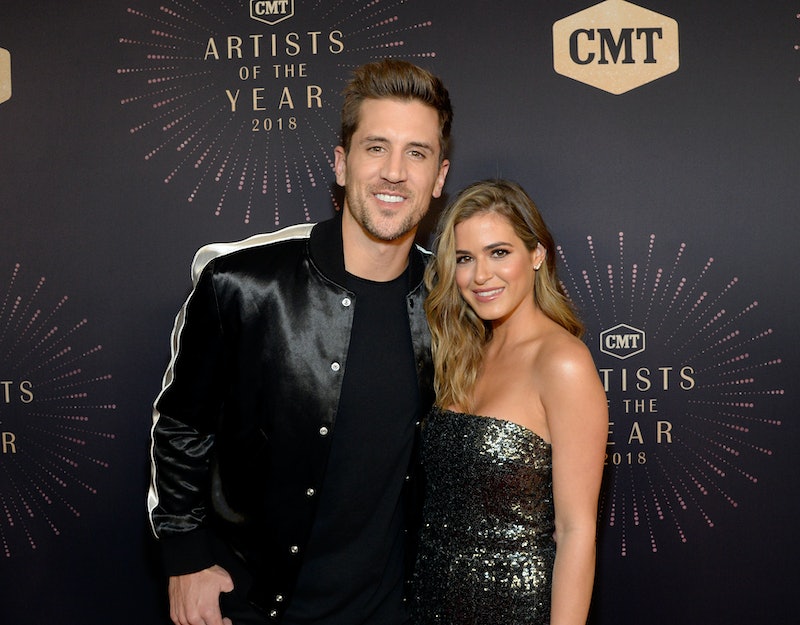 It's been three years since JoJo Fletcher appeared on The Bachelorette, and she and Jordan Rodgers are still going strong. They may have gotten engaged quickly — that is the point of the show — but now, they're definitely in a place where a wedding could be just on the horizon. Is it possible, then, that JoJo and Jordan will get married in 2019? These two may be walking down the aisle sooner than you think.

In life, you tend to have to kiss a bunch of frogs before you find a prince (or princess). In JoJo's case, she got to have Ben Higgins tell her he loved her on his season of The Bachelor while also saying the same thing to Lauren Bushnell. Ben eventually chose Lauren to be his bride, but JoJo got something better — a chance at love on her own season of The Bachelorette. JoJo's season gave us big-time Bachelor alums like Chase McNary, Luke Pell, Alex Woytkiw, and Robby Hayes, but it was Jordan, a former NFL player with a very famous NFL-playing brother, that ultimately captured JoJo's heart and got down on one knee. They've lived happily ever after ever since, even though they've yet to officially tie the knot.

It seems completely reasonable to wait to get married after getting engaged on The Bachelor, given the show's accelerated timeline. These couples have to slowly move in together and learn each other's coffee orders and phone numbers (because remember, they don't have their phones with them on the show). "You meet each other in a very different environment and then you get to reality and you're merging your lives together," Jordan told E! in 2018. "There was a lot of work that was involved in getting to know each other."

Now that he and JoJo have gotten over those humps, marriage is the next step. Jordan's older brother recently got married, and in an Instagram caption, Jordan said that he and JoJo would be next.

JoJo echoed this sentiment during an interview with Entertainment Tonight in February. "We said that 2019 was going to be the year that we set our date, so now we're actively thinking about when the date is going to be," JoJo said, continuing that she and Jordan would love a spring wedding, but only after Jordan’s brother got married. And that time is, uh, now, isn't it?

And in the grand tradition of Bachelor couples, JoJo and Jordan told Us Weekly that they'd be up for a televised wedding — but with some caveats. "We would never do a wedding that was just filled with a bunch of Bachelor people that we don't even know, because that's not us," JoJo said. "But if we could have it the exact way that we'd want it to be, and allow people to see it as well, then I would say yes."

Whether or not the wedding is televised, JoJo and Jordan seem to be on-track to head down the aisle within the next year — probably next spring, from the sounds of it.

More like this
So... When Are Gabby & Erich Getting Married?
By Kadin Burnett
Clayton & Susie Broke Up, Citing "A Significant Amount Of Pain" After 'The Bachelor'
By Jordyn Tilchen
Bachelorette Gabby Kissed Her New Fiancé On 'Dancing With The Stars'
By Jake Viswanath
Everything To Remember About Lace Morris Before 'Bachelor In Paradise' Season 8
By Grace Wehniainen
Get Even More From Bustle — Sign Up For The Newsletter