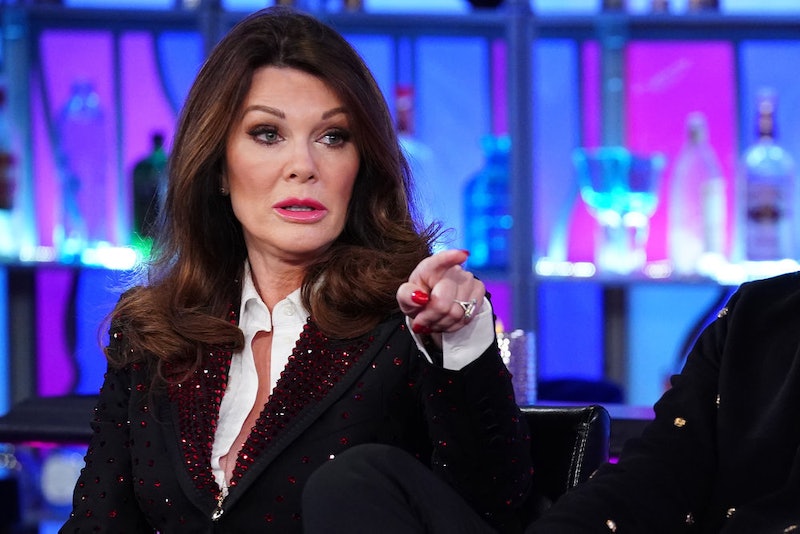 Lisa Vanderpump recently shocked viewers by leaving Real Housewives of Beverly Hills after nine seasons. A member of the original cast, Lisa's career has flourished since the show began: she opened Pump, started the Vanderpump Dog Foundation, and kicked off her own iconic reality show: Vanderpump Rules. So, will LVP join the Vanderpump Rules Season 8 cast — or is she done with reality TV for good?

According to Page Six, Lisa was spotted filming for Vanderpump Rules in late May, so it looks like she will be joining the cast after all. She and her Vanderpump Rules castmates were filming their World Dog Day celebrations — somewhat ironic, given Lisa's run on RHOBH this year. Lisa's falling out with the rest of the cast was prompted by "Puppygate." When Dorit Kemsley adopted a dog from Lisa's rescue center and later re-homed it, Lisa was accused of leaking the story of the dog ending up in a shelter to the press. Lisa denied it at every possible turn — but eventually, the fighting became too much to bear and she exited the show mid-season.

If LVP has lost a set of friends in the RHOBH cast, the Vanderpump Rules cast is certainly eager to take their place. Nearly every major cast member has spoken out in support of Lisa's decision to leave the cast. "If she's in a situation she needs to leave, I respect that," Tom Sandoval tells Extra. Ariana Madix adds, "Last year was really tough on her." Stassi Schroeder, Katie Maloney, and Kristen Doute weigh in too, "I think she needs a break," Stassi tells Access. "I feel like it's some weight lifted off her shoulders," Kristen agrees.

Lisa's given vague comments here and there about whether she'd ever return to RHOBH, most recently telling Daily Express: "who knows?" As Vanderpump Rules and RHOBH fans alike will know, this year was a tough one for Lisa: her brother Mark died in April, and Lisa was visibly struggling with her grief throughout the shooting of both shows. She told Daily Express that RHOBH shooting started just two weeks after the funeral, leaving Lisa "emotionally depleted." Lisa was "tearful most days filming Housewives last season," and at a certain point, she'd had enough.

While Lisa is considered a peer to her other Housewives cast mates (or at lest, she's meant to be), the nice thing about Vanderpump Rules is that Lisa is in a position of power. Her personal relationships are never really the focus: just those of her staff, with Lisa's plotlines revolving around how much the cast looks up to her, or which one of them she plans to fire. Ariana did get slightly into it with Lisa in the Season 7 finale — but even that was done so respectfully that it can't quite compare to a Housewives blowout.

So: LVP may be gone from RHOBH for good, but at least we can take comfort in seeing the queen of diamonds and rosé on next year's Vanderpump Rules. Honestly, after years of growing resentment against Lisa among the Beverly Hills cast, it will be nice to see Lisa solely grace our screens as HBIC once again. The world just shines a little brighter when LVP is on top — and on Vanderpump Rules, she always will be.

More like this
Everything To Know About 'RHONY' Season 14
By Jake Viswanath, Alyssa Lapid and Brad Witter
'Love Island' May Have Just Lost Its Main Character
By Jason Okundaye
'The Traitors' Is Officially Being Turned Into A Board Game
By El Hunt
Rachel Fuda Gave Birth Just Weeks Before 'RHONJ' Season 13
By Brad Witter
Get Even More From Bustle — Sign Up For The Newsletter
From hair trends to relationship advice, our daily newsletter has everything you need to sound like a person who’s on TikTok, even if you aren’t.