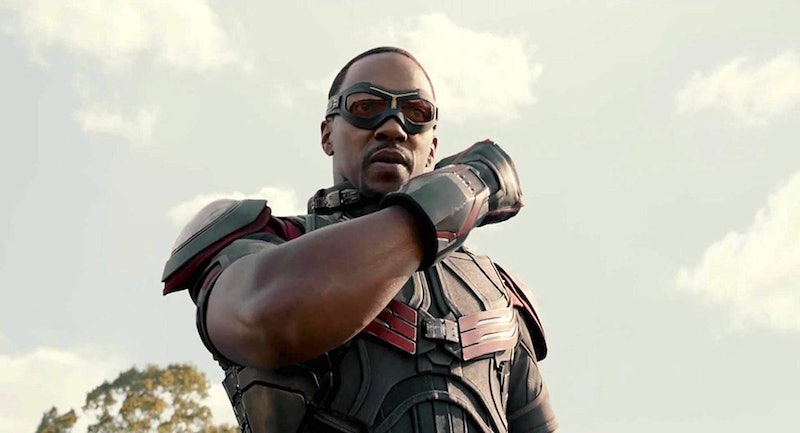 Avengers: Endgame spoilers ahead. One of the most momentous and emotional scenes in Avengers: Endgame is when an older Steve Rogers (Chris Evans) declares his official retirement from his superhero days. He gets a little bit of that life Natasha and Tony tell him to get, and by the end of the film he's passed on the Captain America shield to his trusted friend Sam Wilson a.k.a. Falcon (Anthony Mackie). Will Falcon now be leading the Avengers? Steve, for one, seems to have all the faith that he can.

In Marvel comics, Sam Wilson as Captain America does lead his own iteration of the Avengers. This is specifically seen in Mark Waid’s All-New, All-Different Avengers, where he leads a group consisting of Ms. Marvel (not Carol Danvers), Spider-Man (Miles Morales), Iron Man, Nova, and Thor (Jane Foster). According to blog Inverse, Wilson even develops a romance with Jane.

Within the time that he was Cap, Sam introduces Joaquin Torres, who took over his post as the new Falcon after getting bit by Sam's pet vampire bird Redwing (another long story), he also participates in Civil War II when Iron Man and Captain Marvel can't see eye-to-eye about an alien creature, and he also helps a minor hero named Rage who gets wrongfully accused of robbery.

Wilson enjoys about a two-year reign as the Cap, beginning from Rick Remender's All-New Captain America published in 2015, and ending with the controversial 2017 Secret Empire storyline, in which Steve Rogers comes back and Wilson gives the shield back not knowing that Rogers had a secret allegiance with HYDRA — long story.

There's no telling whether the Marvel Cinematic Universe will be following this storyline, especially since they haven't been known to strictly stick with the comic books' narrative. Miles Morales's Spider-Man is not yet part of the MCU, neither are Ms. Marvel nor Jane Foster's Thor. So there's no guarantee that Falcon/the new Captain America will be leading the MCU's current batch of Avengers — especially since Carol Danvers a.k.a. Captain Marvel (Brie Larson) is around.

In Captain Marvel: The Official Movie Special, Marvel Studios boss Kevin Feige gives us reason to believe that it will be the other Cap taking on the leading role. "One of the highlights of my career at Marvel was introducing [Brie Larson] at Comic-Con and having her come out on stage and stand there with literally almost everybody else from our movies," Feige says. "There she was at the forefront, and it was a great foreshadowing — not just for how audiences are going to embrace Brie as this character, but also for how Captain Marvel is about to take the lead and be at the forefront of the entire Cinematic Universe."

While we don't know what's in store for this new era of the Avengers, we at least know that Falcon's definitely going to star in a miniseries with his other BFF Bucky Barnes a.k.a. the Winter Soldier (Sebastian Stan), called The Falcon and the Winter Soldier. The show is expected to premiere with the upcoming launch of Disney's new streaming service Disney +. There has yet to be any official confirmation regarding the series's premise, but Den of Geek predicts it will show Wilson struggling to accept the shield and the responsibility that comes with his new identity as Captain America.

Whatever the show's plot will be, fans will definitely be able to get to know Sam Wilson and the Falcon a little better. And though we don't know yet how big a role he's going to play in the grand scheme of the MCU, the new series looks like a fun way to find out.

More like this
Nicola Coughlan Shared A Lady Whistledown Excerpt From ‘Bridgerton’ Season 3
By Grace Wehniainen, Alyssa Lapid and Sam Ramsden
The New Bachelor Will Be Announced Next Week & Here Are The Top Contenders
By Grace Wehniainen
The 'Bachelor In Paradise' Schedule Shifts To 4 Hours Every Week After The Season 8 Premiere
By Brad Witter
The 'Andor' Timeline, Explained
By Gretchen Smail
Get Even More From Bustle — Sign Up For The Newsletter