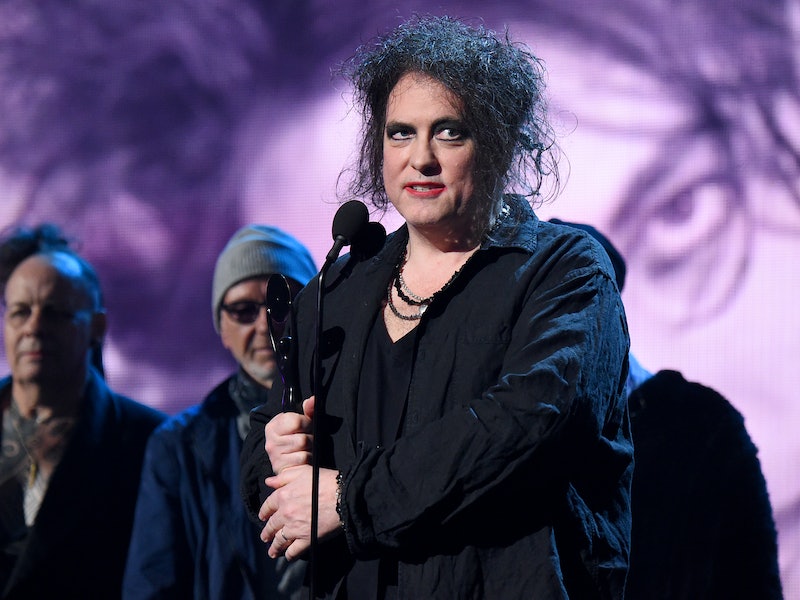 No one's kept up their goth phase quite like The Cure's lead singer Robert Smith. For the past few decades, he's been blackening his eyes with eyeshow, painting his lips blood red, and sporting a fantastically wild head of hair that sort of resembles cobwebs. And I mean this all as a compliment, by the way. If you were desperate to see The Cure headline Glastonbury Festival, but weren't able to get tickets, then you might now be wondering whether The Cure will tour the UK in 2019. As one of the country's most legendary bands, you don't want to spend a lifetime without seeing them live at least once.

While the band will be spending a busy summer touring at festivals around the world, according to their official site, no UK shows — other than Glastonbury — have yet been listed. They'll play their final show of the year at Austin City Limits on October 13, and whether they'll want to spend the remainder of the year resting up or heading back out on the road is currently anyone's guess.

I've reached out to the band's reps to see what their upcoming plans are and whether there are any UK shows on the horizon. I'm really hoping that they'll treat us to a few more gigs before the year's end. I'll let you know if I hear anything on that front.

I do have some faith, though, considering The Cure are prolific performers. While they haven't released any new material since 2008's 4:13 Dream (unless you count their live album at Bestival from 2011), they've been very generous to their fans across the world with their live shows, which usually include a great, satisfying bulk of their decade-spanning discography.

Taking a look at their page on Setlist.FM, I can see that the band have hardly taken any years off touring since they played their first show in 1976. However, while they've made more festival appearances than you've had hot dinners, the band haven't gone on a fully fledged tour since 2016, a year that saw them playing a whopping 76 shows, including three nights at Wembley at the end of the year.

The hunger for them to tour again is only going to rise now that they've announced a concert film of their legendary 1978 Hyde Park set to mark its 40th anniversary, as NME reported on Wednesday, May 29. Allegedly set to arrive in cinemas sometime in July, the film includes footage both from the 1978 gig and the one they played 40 years later for British Summer Time at Hyde Park.

The film should prove that Smith's gothy front isn't the only thing to remain the same in all of the band's years spent making and performing music. The love for this band is unwavering, too. And if we're raising our kids right, there should be many more generations of The Cure fans to come. Now all you need to do is look out for a tour announcement so that you can experience why The Cure is one of the best-loved bands on the planet.