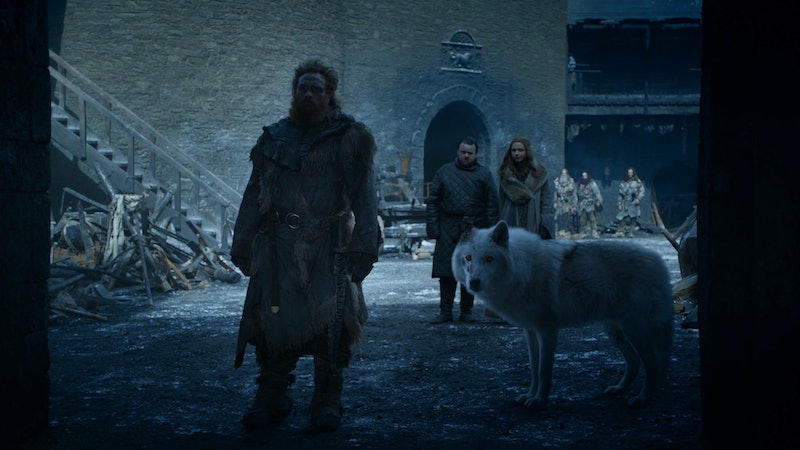 As Game of Thrones draws to a close at long last, some of the characters' final moments may have already happened. However, with surely some twists and turns to come, you can't trust all of the goodbyes either. Which is what some fans are hoping happens to their fave character. Although he seemed to say goodbye, it's definitely worth crossing your fingers that Tormund will return on Game of Thrones? He may not return to the "South," per se, but this may not be the last we see of Mr. Giantsbane if one or many fan theories come to pass.

In "The Last Of The Starks," Jon Snow bid farewell to his Wildling friend and gave his direwolf Ghost to him without so much as a pat on the furry brow. It felt like Jon was saying goodbye to Tormund for good — but the goodhearted ginger wasn't sure and for that reason fans are wondering if what Tormond said to Jon is foreshadowing his friend's ultimate fate.

"You've got the North in you," Tormund said. "The true North."

Sure, the two of them had just previously been discussing whether Winterfell counted as "the South" or not in terms of Westeros, but there was something foreboding about Tormund's comment. Even though there may be a small contingent trying to get Jon Snow on the Iron Throne, Sansa was right that men in her family don't do well in the capital. He's not meant to be that far South, and could find his way North again... and right back into his buddy Tormund's arms.

Vanity Fair's Joanna Robinson posited a theory for what happens to Jon Snow based on the ending of J. R. R. Tolkien's Lord of the Rings — which is known to have inspired George R. R. Martin and what he wants his ending to be. Much like Season 8 of Game of Thrones, the story doesn't end when the Witch King, Sauron, and the One Ring are destroyed. There are are a few more conflicts that spring up in the aftermath, and ultimately Frodo leaves the Shire and Middle Earth entirely to go live with the elves in the Land of the Undying. It's a bittersweet ending, and "bittersweet" is a word that has been thrown around in conjunction to the Game of Thrones end for a while.

Could that be what happens to Jon? Maybe he turns down the thrown and goes to live with Tormund Giantsbane and the Wildings, free from destiny and responsibilities... and back with Ghost, a very good boy.

There's also, you know, the theory that Jon will become a new Night King. His return to the "true North" might not actually be a good thing. In that case, maybe we won't see Tormund again. At least, we can only hope. If Jon becomes a Night King, everyone should probably stay far, far away.

Or — what about a Tormund and Ghost Game of Thrones spin-off? That's not a terrible idea. They could solve crimes. They could go camping. Ghost could be Tormund's new wing-wolf as he looks for a rebound to his unrequited crush on Ser Brienne of Tarth. Let him return as the star of his own wise-cracking adventure. Even if his farewell to Jon was really the end, there are still some ways that he could return.